You did stay until end, right?

Video clips from the Jayhawks' 52-45 win over Colorado. 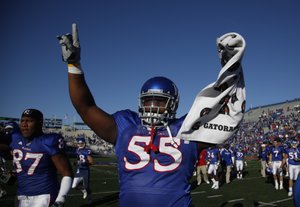 The 28-point fourth quarter comeback was the largest in Kansas University football history, surpassing a 26-point comeback against Iowa State in 1992. In that one, the Jayhawks trailed the Cyclones, 47-21, in the final quarter before coming back to win, 50-47.

Saturday, KU trailed 45-17 early in the fourth before scoring five straight touchdowns to take the victory.

The 35-point outburst in the fourth also represented the most points scored by a Kansas in a single quarter in school history. The five unanswered touchdowns eclipsed the 32-point quarter KU threw up against Washington (Mo.) in 1923.

Also, KU's 35 fourth-quarter points were the second-most scored in a fourth quarter to win a game in NCAA history. The most points scored in the final quarter to win was BYU (36 points in the fourth) to beat Washington State, 50-36, in 1990 (trailed 29-14 at start of fourth. ... While KU trailed by 28 before coming back to win, the NCAA record book lists four games where a team overcame at least a 30-point deficit to win.

Saturday’s comeback wasn’t the first time KU came from way behind to beat the Buffs. In 1950, Kansas trailed Colorado 21-0 late in the third quarter and went on to score 27 unanswered to win, 27-21.

KU coach Turner Gill showed more emotion on the sidelines Saturday than he had in any of KU’s games this season.

Most of Gill’s animation simply was a case of him asking for an explanation on penalties. Gill said the reason he was charged up was because he owed it to his team.

“You always go to get the explanation on what was called and why it was called,” Gill said. “You want to know it. And I gotta stand up for my players.”

“He kept fighting to the end,” Johnathan Wilson said of Gill. “The word of the week was relentless, and he was taking up for us on some of the bogus calls they were calling, and I appreciate it, I really do.”

Saturday’s game kicked off just after 1 p.m. and was played under sunny skies. Temperature at kickoff was 59 degrees.

"Tell the KU fans we're bringing the program back."

did the fans rush the field at all??

nope, players went straight over to the student section and high-fived the first row but no fans were on the field

One fan rushed the field at halftime...south end zone, he ran across and almost ran out the gate where the team enters the field before security finally stopped him.

There was no rush of the field because we beat a bad team. The fans did, however, stay and cheer the team as they left the field.

I've been calling for Gill to be more emotional on the sidelines all year. We won the G-Tech game because of the emotion pent up from losing 3-6 the week before. Football in an emotional game, especially for young players. This team feeds off of it and the staff hasn't provided it all year. So it's good to hear that Gill was more emotional than stoic towards the end. Obviously the players appreciated it.

Could you check some math? It sure looks like KU scored 29 unanswered vs. Iowa State, given your numbers, rather than 26.

The note says the Jayhawks were DOWN by 26, hence the talk about overcoming the largest deficit in school history.

They did score 29 unanswered, as you mention, but they only trailed by 26 points.