Boulder, Colo. — The Colorado Buffaloes, who haven’t won a road game since 2007, find themselves in a very unfamiliar position: they’re more than a touchdown favorite Saturday at Kansas. 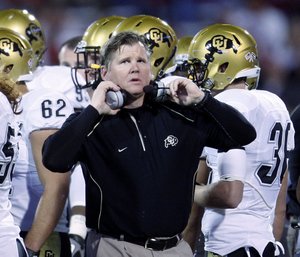 Colorado coach Dan Hawkins looks up at the scoreboard as he walks down the sideline last Saturday in Norman, Okla. Hawkins, considered to be on the coaches hot seat, will try to break a 15-game road losing streak when the Buffaloes take on Kansas University on Saturday in Lawrence.

CU’s 15-game road losing streak is the main culprit in coach Dan Hawkins’ 19-38 record since bolting Boise State in 2006, and the primary reason he’s on one of the hottest seats in college football.

Lose and Hawkins is one step closer to getting pushed out.

“It’s sickening to me because I know we can beat these teams,” senior cornerback Jimmy Smith said. “If you bring some of the teams we play on the road in here, we’d beat them badly. But then we go on the road and it’s like we can’t tie our shoes together for some reason.

Senior wide receiver Scotty McKnight said it’s not like the Buffs are looking at this weekend with a sense of relief.

“We don’t really think of them as being easy. I think the last three years we’re 1-2 against them. We can’t really come in lightly against anyone especially considering our recent losing streak that we’re on,” he said.

“We don’t take them lightly, they may look at us that way but that’s not the way this team is built. We have to go out there and play like ... we’re playing in the Super Bowl.”

A bowl, any bowl, is what Smith is shooting for.

“It might not be on other peoples’ minds, but it’s on my mind,” he said. “I definitely want to win out and go to a bowl game.”

Of course, the Jayhawks surely see the Buffs as their best chance to finally win a league game, too.

The Buffs had high hopes after jumping out to a 3-1 start but they haven’t won in a month, and their four-game losing streak includes disheartening losses at home to Baylor and Texas Tech.

They have two more home games left, against Iowa State and Kansas State, before closing out their season, their Big 12 run and possibly Hawkins’ tenure with a visit to No. 9 Nebraska.

Lose Hawkins, and see you later, alligator---no more coaching at CU----what a bummer!

“If you bring some of the teams we play on the road in here, we’d beat them badly. But then we go on the road and it’s like we can’t tie our shoes together for some reason."

This has to be one of the toughest weeks for CU fans. What to cheer for? Beat KU: Celebrate a win and end a 15 game losing streak that has lasted three years. Lose to KU: Celebrate Dan Hawkings firing which could come as early as Sunday and be able to look forward to the PAC 12 with a new coach. Which sounds like it would be legendary Coach McCartny if they decide to offer it to him.