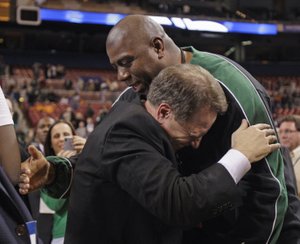 East Lansing, Mich. — Mateen Cleaves clapped hands and bumped chests with each of the Michigan State Spartans as they filed in for their first video session after advancing to the Final Four.

“Hey!” Cleaves screamed in the hallway lined with framed posters that promoted past teams.

Players come and go at all colleges.

They make a trip to the banks of the Red Cedar River to pop into coach Tom Izzo’s office and team up with former and current NBA players such as Magic Johnson — still called by his given name, Earvin, on and around campus — to take on collegians in the summer.

When the ex-greats can’t get back, cell phones keep the Michigan State basketball family in touch.

Izzo says that ranks No. 1 on his list of joys he gets from his job.

“Just about all of them have called or texted,” Izzo said Tuesday at his news conference. “Definitely a good time for me.”

On Monday, a day after Michigan State beat Tennessee by a point, Cleaves was making the rounds through the Breslin Center when Goron Suton knocked and barged into Izzo’s conference room with the subtlety of Kramer on a “Seinfield” episode.

“G!” Izzo said with an ear-to-ear grin, taking a break from breaking down videos of Butler to welcome a key player on last year’s runner-up team.

It was just another afternoon at Michigan State, where Izzo’s dream of building a family atmosphere and an elite program has come true.

Johnson put the Spartans on college basketball’s map in 1979 when he led the Spartans past Larry Bird-led Indiana State for their first national title.

Cleaves, Morris Peterson and Charlie Bell — known as “The Flintstones” because they hailed from Flint — won the school’s second title a decade ago.

Michigan State will face the hometown Butler Bulldogs at the Final Four on Saturday.

Johnson was in the stands in St. Louis, where the Spartans squeaked past Tennessee, and is expected to be in Indianapolis on Thursday to share his wisdom and enthusiasm.

Cleaves plans to be at Saturday’s game.

“I wouldn’t miss it,” Cleaves said. “It was our goal to help build a big-time program and it has happened.”

Every player recruited by Izzo in his 15 seasons as head coach has been on a Final Four team.

Michigan State will play in its sixth Final Four since 1999. UCLA, North Carolina and Duke are the only other schools who have played in college basketball’s showcase at least six times in a 12-year stretch.

If the Spartans can beat Butler and get past the winner of the Duke-West Virginia game Monday night, they would have three national titles to trail just UCLA, Kentucky, Indiana and North Carolina in NCAA men’s basketball championships.

Izzo has also steered his players into the classroom, graduating 31 student-athletes since 2000 and 84 percent of players who completed their eligibility on campus.

The Spartans also get schooled in the summer, shooting hoops against Johnson when he visits his hometown of Lansing and other former college stars at what has become a state-of-the-art basketball facility in East Lansing.

“It’s great for us,” junior shooting guard Durrell Summers said. “It means a lot to us for those guys to come back and take time out of their day to talk to us. It really shows that we have a Spartan family.”

Bell said he considers the Spartans who came before him older brothers and those after him little brothers.

“We have a common bond that I don’t see other guys in the NBA have with their schools,” said Bell, who plays for the Milwaukee Bucks. “We all bleed green.”

"Every player recruited by Izzo in his 15 seasons as head coach has been on a Final Four team."...

This is an amazing statistic. As a former Michigander, I'm proud of the Spartans, but still wish KU was there instead.

As I read this article, it reminded me of the situation KU basketball has in terms of it's family atmosphere and tradition. So I would take exception to the statement that MSU is the only school whose former playersin the NBA have a common bond to their school.

Izzo is simply unreal in what he has done. Some jaw dropping statistics pop out during his tenure.

You can love him or hate him...but give him props, the coach knows how to win. Most coaches don't even know how to win with much. Izzo seems to win with very little, or less than other coaches.

Tom is simply an outstanding coach. If you watched the ending of the MSU-Tenn game, a time out was called between two critical free throws (first was made to make the score 70 to 69). During the time out, he made sure the free throw shooter purposefully missed the free throw (I personally would have thrown the ball against the front of the rim) to try to have the ball go into a helter-skelter rebound mode (did not happen). But at least the coaching was there - Tennessee had to stop the clock and move the entire length of floor (of course Tom used this to set up the inbounds defense). One and 6/10 seconds left on the clock. In bounds defense was set up perfectly resulting in terrible shot from Tennessee - game over with a victory. Outstanding understanding of the game from an impressive coach. I hope the Spartans win this NC.