Kansas University forwards Marcus Morris, left, and Markieff Morris made the extra effort to hit the weights in the offseason. They have added muscle, they’re more aggressive, and they’re dunking with regularity, parts of their games that lacked at times last year. 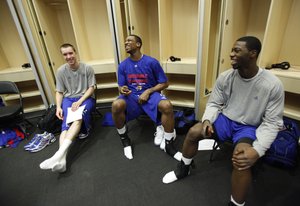 Oklahoma City — If Philadelphia hadn’t already been coined the City of Brotherly Love, someone familiar with the city’s basketball-playing Morris twins might have thought to name it that.

Marcus Morris, a star on the Kansas University basketball team, and Markieff, the most valuable reserve, never shy from talking about how close they remain. They take great pride in each other’s accomplishments and never display even a hint of jealousy.

“Just having him around is fantastic,” said Marcus, coming off a career-high 26 points and 10 rebounds in an NCAA Tournament first-round victory against Lehigh. “I love him, and he loves me, and we’re best friends. We just enjoy being around each other.”

The tendency of those of us who are not identical twins is to feel bad when look-alikes are mistaken for each other or grouped together when one of them makes a mistake. Watching the Morris twins interact would be enough to make any non-twin wish he or she had one.

Markieff had no trouble rattling off a few of the benefits.

When they arrived at Kansas, the Morris twins didn’t have a clue how hard Div. I basketball players had to work. Fully appreciating that became the springboard to rapid improvement. Marcus might be the most improved high-profile player in the country, and it can be traced to more than increased effort.

He, as does his twin, has an extremely keen aptitude for basketball.

It’s not a surprise that the twins have sharp basketball minds because they’ve been talking basketball with each other all their lives, sharing critiques that make each other better and restoring each other’s confidence after rough performances. Neither one of them ever had to go back to a room alone with negative thoughts eating at them after playing poorly.

“Having somebody you played with your whole life on the court with you, telling you how everything is, never sugar-coating it, it’s good,” Marcus said. “We’ve always had each other, so if he’s doing something wrong I’ll tell him, and if I’m doing something wrong, he’ll tell me. We’re so close that we keep each other in check and tell each other what we could do better.”

They have differences as basketball players. Markieff is an inch taller, a better three-point shooter and a better shot-blocker. Marcus is significantly quicker, particularly moving his feet on defense, a far more skilled ball-handler and smoother with his pre-shot moves. Both have soft touches, even softer hands and excellent passing radar.

They are similar enough as players that their basketball brains also benefited from being able to do what amounts to watching film of a reasonable facsimile of themselves by watching their twin play basketball live every game.

“He knows my game better than anyone,” Marcus said of Markieff. “It’s also bad when we’re playing one-on-one because he knows every move I’m going to make, and he knows where I’m going to shoot the ball.”

The brotherly love can motivate one twin to relieve pressure from the other.

“In high school, if I had an eight-point game, I knew he would have a 20-point game and the other way around,” Marcus said. “And that’s what’s been going on this year. If I’m not stepping up, ’Kieff is always coming off the bench and giving good minutes.”

The twins’ considerable aptitude in the hands of assistant coach Danny Manning, one of the smartest big men ever to play the game, has made for a nice combination.

“Danny taught us the game, and he’s also been a father figure to us,” Markieff said. “It’s not always about basketball with him. Anything we needed to know, he taught us. Coach (Bill) Self has made us even smarter with his mentality of the game.”

The twins’ mother, Thomasine Morris, moved to Lawrence when they enrolled at Kansas. Their father?

“He’s not really in our lives at all,” Markieff said. “I know him. He’s just not there, I guess. I know who he is, and I see him sometimes when we’re home, but we just don’t have a father-son relationship.”

Markieff added: “When I have kids, I’m always going to be a father to them.”

He always has his brother at his side and said he’s happy their mother moved to Lawrence.

“It’s a good way to get away sometimes,” Markieff said. “Get home-cooked meals, washing clothes, small things like that.”

“Cornbread, fried chicken and white rice,” said Markieff, who added he and his twin always will be grateful for the double shifts she worked in the emergency room while they were in Philadelphia.

Markieff said he doesn’t get to have his favorite meal as often as he’d like during the basketball season because of the demands on his time. Most of the twins’ time away from basketball and books is spent playing video games, sleeping, and watching ESPN. Markieff has been seeing a lot of his brother on the highlights lately.

“It definitely makes me proud of him to play the way he’s playing,” Markieff said. “I’m happy for him.”

And he’ll be ready to step in for him the moment he needs it most. That’s what being a twin is all about.

M&M, or March Madness, one of my favorite times of the year. Double M&M's, the Morris twins, two of my favorite basketball players. And M&M's, one of my favorite candies. I think M&M candy has missed the boat all season. I think they could have promoted their candy through KU's twins all season. Just imagine a whole student section in Allen Field house holding up two foot square cards (Supplied by M&M's), crimson on one side and blue on the other, with M&M's printed on each, every time one of the twins scored, rebounded, stole the ball or any fantastic play by them. The announcers would surely have commented on the cards throughout the broadcast. The cost of the cards would have been miniscule compared to the national exposure M&M's would have received.

Since the 1970-1971 season (If my memory hasn't escaped me.), when the KU band started playing the "Didn't eat your Wheaties" theme song each time an opponent has fouled out, Wheaties has gained a huge amount of free advertising from KU. They even sent us thousands of empty wheaties boxes to wave at the UCLA - KU final four game in Houston's Astrodome. Unfortunately, KU lost and it was only towards the end of the game that a UCLA player fouled out. But, the Wheaties theme has prevailed over the years.

As a side note, thanks to Cheez-Its for their TV ad promoting KU sports and which includes the KU mascot.

Keep up the good work Hawks and best of luck to the entire team during the tournament.

I've always had confedence in the role that Danny and Bill play in these kids lives outside of basketball. Similar story with Sherron. It just shows that organized sports can be such a positive factor for kids today.

No one coined "The City of Brotherly Love." Philadelphia means brotherly love.

These guys are good players. I'm not sure I've seen such improvement between fresh and soph seasons since following the Hawks since mid 60's. But the thing that really impresses me is how fine they are as young men. To have the confidence to express their feelings and to respect their Mom, not really bad mouth their father and to accept the coaching tips necessary to improve their game. With their down to earth attitude, they have a great future in basketball and life. Good job Mom!

thank you both for off season extra work. thank you for bending your knees at the FT line thank you for this year blocking veritical instead of like last year leaning into opponent thank you for not pouting (like last year) when the ref makes a bad call...smile and change the ref attitude for next whistle.

thank you for playing hard, tough, smart and making the D wish they hadn't collapsed on Cole or SC when he drives the lane. make them pay. 5 more gaems make them pay.

Wow, what a great article, very well done. I just can't say enough how lucky we are to be Kansas Jayhawk fans. These twins have realized what its all about, and praise to a hard working mom to raise two good young men. . . our country could use more people like her. I can't praise Bill enough for recruiting top notch high school players and turning them into solid young men that have no chip on their shoulder or ego that can tarnish any accomplishment. I am so proud to be a small part of Jayhawk Nation. Rock Chalk

If the twins apply the same work effort and improvement mentality to their off-season this year that they did last year, they will dominate the NCAA next season, and even possibly be drafted into the League after another Final Four run...

The twins make the Jayhawks good! Thanks for all you have done this season. Still more season to go, right? If they both come back next season, which they should, that experience will be awesome for next season!

i'm really proud of the twins - they have made their way to become solid contributors from highly potential freshmen last year. i, as a fan, am lucky to be able to watch them grow and watch them improve in game after game. besides making pts, they work a lot harder under the rim, help out on D, etc. they will dominate even more next year! yeah, next year, we'll see them bulkier, taller, faster, tougher, better players!!

CBS did a thing on KU today and Hudy was featured. Great piece! Hudy is an interesting person.

As KU continues to go deep into the Tourney (hopefully), CBS may do another piece on her----just her----this one was the Morris twins, Self and Hudy. I'm hoping that will be the case.

The Morris twins will be our best chance for a national championship. The last shot of the game with NI is a glimpse of the future. We have good guards and the best big men in the country. Teams will not be able to stop them. They are our next big shot. Reed got better every game. Reed and Marcus were the two best at the end. Next year is going to be a very good year if everyone stays healthy. Reed will be a team leader and the Morris twins are going to dominate. I just didn't want to be on the other page right now and read all the negative comments. The future is bright for the Jayhawks. I hope Self is not too disappointed. I think he did all that he could.