Check out these stories for more insight before KU's game against Lehigh:

Out of the blocks

Lehigh not backing down 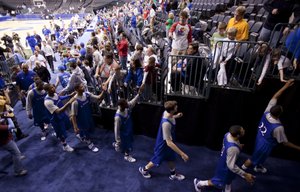 Videos for Kansas' first-round game in the 2010 NCAA tournament against Lehigh.

“My circle texted me, not many random people. They know me and ‘X’ don’t want to put up with any distractions,” said C.J., who, like brother Xavier, hails from OKC.

“There are no distractions,” added C.J., who did enjoy visiting with his high school coach at the Jayhawks’ hour-and-15-minute practice Wednesday at the Henrys’ alma mater, Putnam City High.

“I’ve got family here. I’m taking care of Xavier. We have to play two games.”

Older brother C.J. said he normally doesn’t have to say a lot to Xavier, who is mighty mature for a college freshman.

“He’s pretty self-motivated,” C.J. said. “He gets himself ready for the game. I may step up and give him some pointers during the game because he listens to me, but nothing really to get him going.”

C.J. wishes he, like his brother, could be a big factor in the NCAAs.

But the reality is he has had an injury-plagued season. First he was held back by offseason surgery on his foot. He also has had some knee woes and most significantly, a severely bruised tailbone that pretty much shelved him for the entire Big 12 season.

“It was in practice before the Iowa State game. I jumped up to block (Jeff) Withey. He kind of bent over. I flipped over him and kind of landed on my back,” Henry said. “That was a freak accident with Jeff that happened. My knee was a previous injury I got in baseball (playing for Yankees farm team).

“I’m not frustrated,” he added. “We’re doing well, are 30-something-and-2 (32-2). I’m just happy the team is doing well. I just try to prepare the guys everyday in practice to get better so we keep winning.”

There’s no guarantee C.J. will stick around for a second season at KU, with brother Xavier expected to enter the 2010 NBA Draft.

Of Xavier, he said: “Eventually, he wants to play in the NBA. I know he wants to do that. I don’t know whether it will be this year or two or three years down the line. I don’t know. When he feels he’s ready, I think he’ll go.”

C.J. said there was a time he wondered what it’d have been like had he spent this season at Memphis, a place he sat out last season because of injury.

“I wanted to play for coach Cal,” he said of John Calipari, who bolted Memphis for Kentucky. “I was just unfamiliar with what they had coming back and the new staff. I’m happy where I’m at.”

And he’s currently happy to be in his hometown of OKC.

“We’re excited to come back and see close friends and family and excited for our Kansas fans who can drive here,” C.J. said. “It’s a good seed, a good spot. Ford Center is a good place to be at.”

Xavier Henry said he’s experienced no distractions in OKC. “It’s a distraction if you let it be one,” Henry said. “I’ve been staying away from my phone, trying to not get too caught up in this. It’s always good to come back home. I always enjoy coming home. If I wasn’t playing, I’d love to be home.”

“I know I’ll start out on him,” Taylor said. “I look forward to it. It’ll be a challenge. I think we’ll be fine defensively. If we do our stuff, do what we practice, we’ll be fine.”

“He can shoot. He can score. He has the green light to do whatever he wants,” Taylor said.

“It’s obviously a great conference,” KU enter Cole Aldrich said of the Patriot League, which has Bucknell and Lehigh as members.

“I may have mentioned it once,” KU coach Bill Self said. “I won’t dwell on that. That’s bringing up negative things. What we want is to be in attack mode.”

Of the Bucknell issue, Self said: “There’s similarities that we’re playing a team from the Patriot League and playing in Oklahoma City, that kind of stuff. But you know, we have a different team, and this is certainly a different team than we played in ‘05.”

The Jayhawks were asked if they feel pressure entering as the tournament’s overall No. 1 seed:

“Everybody wants to be No. 1,” KU sophomore Markieff Morris said. “We don’t take too much out of being No. 1, just look forward to the game we’ve got.”

“We worked hard to get here as the No. 1 seed,” Taylor said. “That was one of our goals, to try to be No. 1 seed in the NCAA Tournament. These next couple games are the most important. We have to prove we’re No. 1.”

The Jayhawks are in the same locale as Kansas State, which meets North Texas today in the first round.

“I don’t know if they’re pulling for us,” Taylor said of the Wildcats, “I’m not sure we’re pulling for them, but I like those guys. They’re good guys. I love the good competition. I’m rooting for my Big 12 teams. I guess I can say I hope they do well.”

“They are cool on the court sometimes, and other times we don’t like each other,” Morris said. “But the past couple games, we’ve been real cool. I root for Big 12 teams.”

The winner of today’s Lehigh-KU game will meet either UNLV or Northern Iowa on Saturday. That game time will be revealed tonight.

It’s because he used to play pickup basketball games with Sherron Collins when Collins prepped at Chicago’s Crane High School.

“He comes from a very, very tough neighborhood and has done the right thing, stayed in school,” Duncan told the paper. “He’s a tough kid from Chicago. I’m biased, but he’s got a lot of heart. He’s the kind of kid where the right experiences changed his life forever. Having watched him since he was 14, it’s nice to see him have the opportunity he’s having now. That’s sort of what it’s all about.”

Of Duncan, Collins said: “He’s got game. We played a lot of pickup when I was in high school. He gave me a lot of advice about how to act on and off the court, about choosing a college and stuff like that.”

KU held a 40-minute shootaround in front of about 1,000 fans Wednesday at Ford Center. Travis Releford, Jeff Withey and Elijah Johnson had a few crowd-pleasing dunks in the final minute.