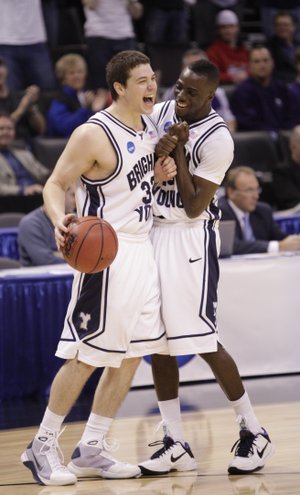 Oklahoma City — Jimmer Fredette and BYU survived a thrilling reminder that March Madness is back.

Fredette scored 37 points, including two 3-pointers in double overtime, to seal the Cougars' 99-92 win over 10th-seeded Florida on Thursday in the first round of the NCAA tournament.

Fredette, the nation's 12th-leading scorer, made a 3 from the top of the key to put seventh-seeded BYU (30-5) ahead 90-83 with 2:42 left, then added another deep shot with just over a minute remaining to put the game away.

Michael Loyd Jr. added a career-high 26 points, pushing BYU to a lead it would hold until a late second-half rally by Florida. Loyd scored all the Cougars' points in the first overtime.

Kenny Boynton scored 27 points for Florida (21-13), helping to rally the Gators from a 13-point second-half deficit in their first NCAA tournament game since back-to-back national championships in 2006 and 2007.

BYU snapped a streak of seven straight first-round losses in the tournament.

Fredette followed his second 3-pointer of double overtime by stopping to gesture to a pack of Cougars fans gathered behind the BYU bench. He clenched his left fist as he dribbled the ball upcourt to run out the final seconds, with Florida's hopes fizzling after Boynton fouled out early in the second overtime.

Boynton rallied the 10th-seeded Gators out of a 13-point hole in the second half and hit a 3-pointer from the right wing to put Florida ahead 71-68 with 2:36 left in regulation — their first lead of the second half. Chandler Parsons followed with a 3 of his own, but Jackson Emery was able to answer for BYU as the Cougars closed a four-point deficit down the stretch.

Vernon Macklin left an opening when he missed one of two free throws in the final minute, and Fredette was able to tie it at 75 on a layup with 25.3 seconds left.

Parsons missed a jumper from the right side of the lane in the closing seconds, and Jonathan Tavernari missed the backboard entirely with a heave from beyond halfcourt after the Cougars called timeout with half a second left in regulation.

Loyd, who had been averaging 4.6 points, scored all six of the Cougars' points in the first overtime. His spinning layup after the Cougars saved the ball from going out of bounds tied it at 81. Florida couldn't capitalize on two opportunities in the final minute, with Parsons missing a 3-pointer and Dan Werner missing an awkward volleyball-style tap off a busted play.

Loyd opened the second extra period with a 3 from the left wing and Fredette drew Boynton's fifth foul on the Cougars' second possession. The Gators fell behind from there, and BYU — the nation's top foul shooting team — closed it out despite missing three of its first six free throws in the final 5 minutes.

Loyd scored 10 straight points dig BYU out of an early seven-point hole, and Brigham Young seized control with another 10-0 run midway through the second half.

Fredette followed Tavernari's 3-pointer with one of his trademark driving scoop shots in the lane, and Emery's 3-pointer from the right wing put the Cougars up 59-46 with 9:09 remaining.

Boynton led Florida back with a personal 14-7 run, converting a three-point play and then hitting three straight 3-pointers to close the gap to 66-63 with 4:36 to play. Vernon Macklin's right-handed hook shot tied it at 68 with 3:27 left.