KU men’s basketball team performing well in the classroom, too

Kansas center Cole Aldrich, right, and C.J. Henry, left, wade among the luggage as it is set down along the drive outside the Sheraton Hotel in downtown Oklahoma City, Tuesday, March 16, 2010. The team arrived Tuesday evening and is scheduled to practice at 5:10 p.m. Wednesday at the Ford Center.

What do you value most in a college: top-ranked sports programs or top-ranked academics? 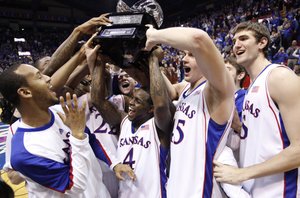 Download these wallpapers from the 2010 Kansas basketball season for your computer's desktop. 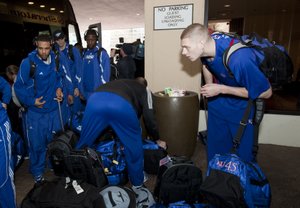 The Kansas University men’s basketball team is the favorite to win this year’s NCAA championship — and their report cards don’t look too shabby, either.

The Jayhawks have the top Academic Progress Rate scores of any of the 65 teams participating in the tournament. The APR is a figure used by the NCAA to determine academic performance, and includes factors such as eligibility, retention and graduation. The metric provides a semester-by-semester snapshot, taking into account the academic progress of each student-athlete.

For the last five years, an online publication, “Inside Higher Ed,” has used each team’s APR scores to create an “Academic Performance Tournament” using the teams in the men’s tournament. This year, KU defeated Brigham Young University in the Final Four before going on to beat Duke in the final to claim this year’s title.

In the same mock tournament, Big 12 rivals Kansas State University lost its first-round game to North Texas, while the University of Missouri made a second-round exit to West Virginia.

Teams with an APR below 925 are subject to NCAA penalties. The KU men’s basketball team has an APR of 1,000, using data from 2004-08, according to a study done annually among the men’s basketball tournament teams by the University of Central Florida’s Institute for Diversity and Ethics in Sport.

He said that’s accompanied by a large student support staff that helps tutor student-athletes in their courses.

“We have all of that in place,” Marchiony said.

The NCAA also tracks Graduation Success Rates, a formula that attempts to measure how many of a team’s student-athletes go on to graduate, while taking into account transfers and students who leave in good academic standing.

KU’s men’s team has a 73 percent GSR, according to the Central Florida study. That’s up from a 64 percent score last year, and was tied for 27th highest in the tournament field.

For KU’s basketball team, however, the rates were closer — with a GSR of 75 percent for its white athletes, compared to 67 percent among black athletes.

this is something we can all be proud of as KU fans. No surprise that KSU would rank low on this list; they have trouble graduating regular students who don't have the rigorous schedule and pressure of a Big 12 athlete. I wonder what Kentucky's APR and GSR will look like? Or Memphis' during Calipari's stretch there?

It obviously helps having an Academic All-American on the roster!! Way to go Cole and Company.

Academic Nat. Championship Game a preview of April 5th? I think so.

This is great! I am glad we can be proud not only of our players' basketball success, but also their academic success.

Nice going Jayhawks! Nobody can say we're a dumb team. K-State & Kentucky---well, one can only imagine!

We beat out Duke and Cornell.

This is absolutely awesome news and the players should be very proud!!!!!!! As should everyone involved!!!!!!!

Jeesh gang. Enough of the K-State bashing. How about celebrating our own success while, at the same time, being happy for our friends and neighbors for finally regaining their rightful place in the basketball world. Face it, our "rivalry" with K-State pretty well sucked for about 20 years. Our world is going to be a much better place with a GOOD K-State in it.

The good, tough Big 12 Conference play prepared this team for the bracket screwing the got from the NCAA. I agree kcglowboy, we ought to be celebrating the forthcoming Final Four of the Jayhawks, ksu, and Baylor, oh. and W Va