Fans brave cold to rejoice in style at Big 12 tourney 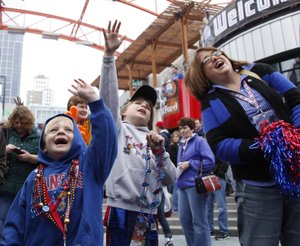 Mike Crosby, a Bonner Springs resident, received tickets to KU’s Thursday contest against Texas Tech on Wednesday afternoon. He spent the rest of the day trying to make sure he and his wife could get off work.

Success. Crosby’s wife was able to leave work early, and Crosby, who owns a plumbing company, said he had a good thing going with his job. “One of the guys I work with, he’s not a basketball fan,” he said. “So whenever there’s a game he kind of holds down the fort.”

Crosby, like many KU fans crowding the space heaters on the District’s live block, said he and his wife often make the 40-minute trek to Lawrence to catch home games and have never missed a Big 12 tournament. “I’ve been a Jayhawk fan since I was old enough to realize I needed to pick a team,” Crosby said.

The Tonganoxie native arrived in Kansas City, Mo., in time to catch the Jayhawks beat the Red Raiders, 80-68.

Mitchell said he usually checks the KU game dates in advance to make sure he can avoid any scheduling conflicts. “I just make sure I’m always available,” he said.

The Jayhawks take on Texas A&M at 6 p.m. today.

If tickets are still available, what are the best ways to go about getting them for the championship game?

wtarush, it's been my experience at conference/NCAA tournaments that the best way to get tickets is to buy them at the site from fans who just watched their team get knocked out. At the conclusion of the early games on the first couple of days, I wait outside and ask the glum looking people if they have any tickets for sale as they exit. Sometimes people are so upset they will just give them to you! Usually you can offer them about half-face and they will just be glad to get rid of them. Good luck.

bay: agreed. tonight at sprint center two teams fans will have a ton of tix for sale.

likewise in OKC (if we are fortunate to get there) after teams start losing several fans decide to go home and dump their ticketts... usually though not to the fans of the team that beat them.

that is why the saturday sunday games are easier to get into from sidewalk ticketts than the thursday/friday games which go for premium..

if you want seats and can pay, you can check stubhub.com tickettsforless.com cheapticketts.com and sites such as those, but you'll pay retail. I've had good luck with these three, beware as lots of phony sites are up and taking your $$$. By the way, after Sunday selection these prices jump up fast on line after they know for sure who is coming...so walk the plank and buy in advance if you got guts.

Someone wanted to know of a place they could watch a game after it had been played. I found this site. Hope it helps.