Nebraska guard Ryan Anderson (44) shoots over Texas A&M forward Nathan Walkup (45) during the first half of an NCAA college basketball game at the Big 12 tournament Thursday in Kansas City, Mo. 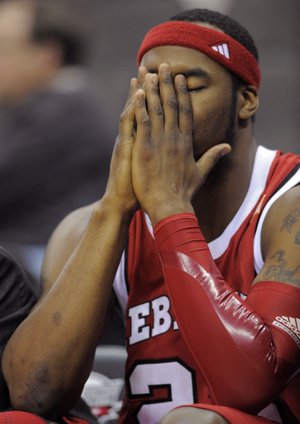 Nebraska forward Quincy Hankins-Cole (23) sits on the bench during the second half of an NCAA college basketball game against Texas A&M at the Big 12 tournament Thursday in Kansas City, Mo. Texas A&M defeated Nebraska 70-64.

Kansas City, Mo. — Donald Sloan scored 23 points and Bryan Davis had a key three-point play at the 1:01 mark, enabling No. 23 Texas A&M to stave off upset-minded Nebraska 70-64 in the quarterfinals of the Big 12 tournament on Thursday.

Nebraska, trailing all game while trying to become the first No. 12 seed in Big 12 history to win two tournament games, cut the lead to 62-58 with 1:35 left on Sek Henry's 3-pointer.

Davis then managed to get behind the Nebraska defense for a layup, was fouled by Jorge Brian Diaz and make the free throw to make it 65-58.

The Huskers (15-18), who lost all but two of their 16 regular-season conference games but beat No. 5 seed Missouri in the first round, will sit out the NCAA tournament for the 12th straight season.

Khris Middleton had 17 for the fourth-seeded Aggies, including two key free throws with 28 seconds to go after Brandon Richardson's two free throws had cut the lead to 66-62.

About midway through the second half, Sloan's free throw gave the Aggies a seemingly comfortable 49-36 advantage. But Lance Jeter scored four quick points and the Huskers went on an 11-0 run, slicing the lead to 49-47 when Anderson made a 3-pointer at the 9:02 mark.

After an A&M timeout, Sloan's basket stopped the drought and a few minutes later, B.J. Holmes's 3-pointer made it 54-49.

Ryan Anderson came right down court and scored for Nebraska, cutting the lead to 57-55. Then Khris Middleton made a 3-pointer, Sloan rebounded Anderson's missed 3-pointer and came back and dropped in a layup for a 62-55 advantage.

The Aggies, headed for a school-record fifth straight NCAA tournament appearance, scored the game's first eight points and never trailed even though the Huskers shot 50 percent.

Sloan, with 12 points in the first half, made a 3-pointer for an 8-0 lead which reached 27-15 before A&M settled for a 37-28 halftime advantage on Sloan's 3-pointer just before the buzzer.

Nebraska's Brandon Richardson who had 19 points in the victory over Missouri, played just 9 minutes in the first half and did not even take a shot. He got his first points on a 3-pointer early in the second half and finished with four points.

This is very good for KU. Tyshawn, Brady and Tyrel, need another shot at guarding Sloane to get them on an edge for the Madness.

And TA&M's bigs will keep Cole and Marcus and Kieff getting better. And this would be a great chance for TRob to get comfortable against some credible bigs.

Yea, Jaybate---- didn't want to face Nebraska for the third time this year. Not saying that we could have beaten them. But A&M gives us more of a challenge. All the points you made are spot on.

we need a little humility that our stuff isn't priceless unless we work every possession. and I feel A&M brings us a better shot of humility over NU. THis game is about one thing, prepare us for the big show... give HCBS a teaching moment...value every moment... crisp passing, protect the rock, feed it inside, move your feet on d not waive your arms...

man texas has turned into an awful team. also damion james is a huge baby, the guy just looks like he hates being on the floor anymore. i guess thats what you get when your coach doesnt care about winning.