KU's bench players watch the game during the Jayhawks' 76-69 loss to Oklahoma State on Thursday, March 11, at the Big 12 tournament in Kansas City, Mo. 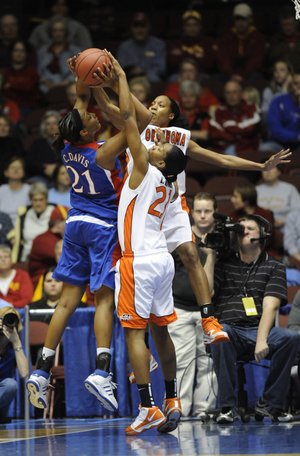 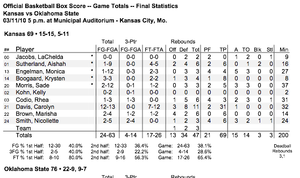 The KU women's basketball team is headed for the WNIT for the second straight year after coming up short in the opening round of the Big 12 tournament.

No matter. Kansas University’s staggering women’s basketball team will be making its second straight appearance in the WNIT.

In the wake of Thursday night’s 76-69 loss to Oklahoma State in the first round of the Big 12 tournament, KU coach Bonnie Henrickson confirmed the Jayhawks will be in the WNIT again.

“Based on conversation,” Henrickson said, “we would possibly have an opportunity to play at home next week.”

In fact, you can probably mark Thursday night on your calendar as the Jayhawks’ next opportunity to stop the bleeding.

WNIT officials no doubt remembered when they agreed to re-invite the ’09 runners-up that last year’s championship game in Allen Fieldhouse drew an announced crowd of more than 16,000

Last season, the Jayhawks barely missed an NCAA bid, then snatched the WNIT offer. This time, their 15-15 record was barely good enough for the WNIT because teams with losing records aren’t eligible.

“We didn’t help ourselves enough in the last 10 days to be in the (NCAA) conversation,” Henrickson said, “but we can go back and draw on the pride we played with last year in the NIT.”

And they can draw on the pride they displayed against NCAA tourney-bound Oklahoma State in Municipal Auditorium. After losing their last three games by an average of 24 points, the Jayhawks were in this one until the waning minutes.

“Honestly,” Henrickson said, “as bad as we’ve been … as well as we played at times tonight feels so much better.”

Last year KU rode to the WNIT title game on Danielle McCray’s back. Now, with McCray on the shelf because of a knee injury, Carolyn Davis might be able to assume the role of the Jayhawks’ Atlas.

Davis was dynamite against the Cowgirls, scoring a career-high 31 points and collecting 11 rebounds off the bench. The 6-foot-3 freshman hadn’t practiced in five days after suffering a concussion during practice a week ago today.

“So now I’m going to have a team full of kids that will think they need five days off and get 31,” Henrickson said with a smile.

Henrickson decided not to start the Houston prep product, saying: “I thought she wouldn’t feel like she wouldn’t have to do something right away.”

Davis entered about two minutes after tipoff and scored seven straight points. She wound up playing 32 minutes and making 12 of 13 shots. Her only miss was a block credited to OSU’s Precious Robinson.

Davis, however, was the only KU player who scored in double figures.

Take away her sizzling shooting, and the Jayhawks made only 24 of 50 shots (24 percent). Notably, starters Aishah Sutherland, Sade Morris and Monica Engelman couldn’t hit the World War I Museum from the top of the Liberty Memorial. They were a combined 4-of-34 from the floor.

Meanwhile, OSU’s Andrea Riley didn’t shoot very well, either … just 33.3 percent. However, she took a tourney-record 30 shots, and half of her 10 goals were three-pointers, at least three from NBA range.

And Bonnie's faceplant is complete. Yes, yes. I know they have injuries, but the faceplant began before Danielle's injury, so that's not really a valid excuse.

Your exactly right brooksjjj but the Bonnie supporters will blame it on the injuries, blah blah blah.

I am neither a big Bonnie supporter nor a big Bonnie detractor but if you took Collins and Aldrich away from the men's program they would not have won the men's big 12 championship. Bonnie is not a great coach and she is not a terrible coach. She is a pretty good coach. Anyone who doesn't think losing their only quality point guard and an all-american hurt them is crazy.

Kackley - That's where you're wrong. We could have lost Collins AND Aldrich and still would make a run for the Big 12 title. There's a huge difference between being the deepest team in all of division 1-A and being hopefully-good-enough at the start of the season.

I don't have a thing against Bonnie, but she's had plenty of time to right the ship and it has not happened. You can only give so many excuses before a pattern emerges, and at this point it's difficult to ignore.

Agree w/milehigh...by the way I thought the women liked playing in the WNIT.

My concern is with the pattern that is set by the AD. When Turner is mediocre 4 years from now I just hope the precedent is that it's not accepted so it's not difficult to can him. I hope Bonnie gets the ax.

Make sure to write Lew and tell him you want a winner!

milehighhawk, you're an idiot if you think we would have won the big 12 this year without Collins and Aldrich! Not to take away from the rest of the guys but their veteran leadership helped us win games when things weren't going well.

I don't have an opinion on Bonnie as a coach but I can tell you the ladies would have made alot of noise in the tournament this year if McCray and Goodrich were healthy and playing. Also, women's college teams are in general not as deep as the guys teams. So missing two of your biggest stars hurts even more.

That would put us at 12-3 for the conference... KSU might of played with a different attitude knowing they could win the Big 12 Title with a win against ISU.

However. On the Women's side. We had McCray and Goodrich for the OSU game at home. We lost by 2 to a last second shot. Re-match: Without Goodrich and McCray... we hung with them the entire game and was even in the lead in the second half. The game wasn't decided until the last minute. We lost our 2 best scorers and still was able to hang with the 19th best team in the country. Goes to the same with Iowa State, Texas, and Nebraska at home too (all without Goodrich and McCray). This WNIT may be her final stand. If she doesn't win it, it won't look good for her. This was a team that was suppose to compete for the Big 12 Title. We look just the same without the 2 best scorers.

Bonnie is a great person, but she needs to realize that something is amiss and she's part of the problem as well.

JJohn - I didn't say they'd win it, I said they'd compete for it.

Work on reading comp before spitting out ad-homs, brotha.