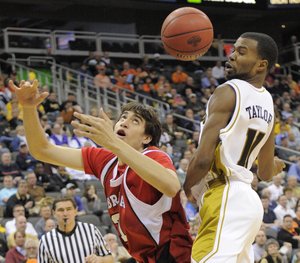 what a pathetic showing by MU... so much for the 40 minutes of HELL... MU sucks and they proved it again today

This same thing could happen to the Kittie Kats (K-State) if they don't get their act together. The Cowpokes are looking pretty darn good!!!!!!

Let's all celebrate the triumphant, expected return to mediocrity for MU! The tigers are back off the prowl...

last lunardi seed projection I saw had MU in the same bracket as KU, hopefully this will change that as playing an arch rival bitter from being stomped twice in regular season in march is something that could go south for us pretty quickly, especially if they had hot hands. Of course the possibility is still very likely that we would beat them by 20 for a third time, but i think the risk/reward of getting a sure win against a team of MU's caliber vs or losing as a #1 seed in march to them pushes my vote in favor of get them out of our regional asap.

MU was a NCAA "lock" before today, is there any possibility this loss would push them out?

I think I just heard the Big 11 slam the door in Fizzou's face!

Then they were heard to say "....Really! Nebraska, Really!"

Mizzery proved again that they suck. Nebraska is terrible and they distroyed Missouri. So now we have seen the true colors of the university of missouri showing how they don't even belong with the worst team of the big12 so I say they should go to the pac10 and then they might do a decent job. Rock chalk!!!!!!!!!!!!!!!!!!!!!