If Louisiana Tech wide receiver Phillip Livas happened to be watching Tuesday’s coverage of the NFL Combine, he likely was not surprised by what he saw from former Kansas University safety Darrell Stuckey.

Participating in the 11th and final group to go through the on-field drills at this year’s combine in Indianapolis, Stuckey ran a 4.49-second 40-yard dash, highlighting a solid day for the Kansas City, Kan., native.

Livas, you might recall, was the man who Stuckey ran down from behind to preserve KU’s 29-0 victory against La. Tech in 2008, a feat that drew major praise from everyone who saw it considering the fact that Livas was known to possess 4.4-second 40 speed.

Like that play did in ’08, Stuckey’s time on Tuesday caught some by surprise.

The former KU captain’s 4.49 tied for the third fastest time among safeties at the combine this year, behind USC’s Taylor Mays (4.43) and Tennessee’s Eric Berry (4.47). Mays’ time initially came in as a 4.24 but when the official times were released that changed significantly. Mays still registered the fastest 40 among all defensive backs at this year’s combine. Stuckey’s second run came in at 4.5. 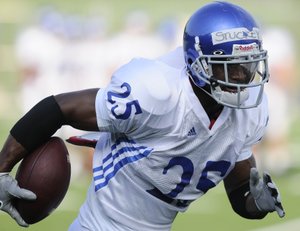 Kansas safety Darrell Stuckey takes off for the end zone during a KU practice on Aug. 11, 2009.

Despite the top-tier time, Stuckey isn’t likely to put too much stock into his 40 and how it relates to his professional football future.

“The combine’s all about track speed,” said Stuckey by phone prior to arriving at the combine. “It doesn’t tell you anything about football speed. In football, you get a bunch of people who are faster in cleats and on grass than they are running a straight line in the 40.”

Speed wasn’t the only skill that Stuckey flashed on Tuesday. He also recorded 17 reps of 225 pounds in the bench press, turned in a 39.5-inch leap in the veritcal jump (tied for third best among safeties) and was praised by NFL Network analysts for his footwork and quickness in position drills.

Next up for Stuckey is the March 10 Pro Day at KU. Fellow-combine attendees Dezmon Briscoe and Kerry Meier also will compete at the school’s Pro Day. They’ll be joined by most of KU’s outgoing seniors in working out for a handful of pro scouts.

Darrell Stuckey will make a fine NFL player. he had a great KU career...probably didn't get the kind of recognition that he deserved because he played hurt all of last year.

he's a great role model as well....any NFL team will find hiim to be a real asset (are you listening Mr. Haley and Mr. Pioli??????)

Darrell Stuckey will make a fine NFL player. he had a great KU career...probably didn't get the kind of recognition that he deserved because he played hurt all of last year.

he's a great role model as well....any NFL team will find hiim to be a real asset (are you listening Mr. Haley and Mr. Pioli??????)

Good job Stuckey! You have definitely been my favorite Jayhawk the last couple of years. You even seem like a better person off the field, which says A LOT about you. I look forward to seeing you shine in the NFL.

I've been telling anyone who would listen that Stuckey was going to drop some jaws at the combine since before this past football season even started. You watch him on tape (or in person as I am honored to say I did for the last 4 years) and his speed and strength IN A GAME, where it actually counts, pretty much blows anyone besides Mays and Berry out of the water as far as safeties are concerned. His numbers in these drills don't surprise me one bit but its what he did or rather said behind closed doors that I feel will truly seperate him from everyone else. Anymore, the interview process at the combine is a big deal and I guarantee noone impressed those NFL guys more than Stuckey. He is charasmatic and a HIGH character guy, member of the KU student senate and helped start the KU chapter of fellowship of christian athletes. Whoever is lucky enough to have Stuckey fall into their hands on draft day is going to be getting an amazing athlete but an even better person who will always represent his franchise with pride on AND off the field. Rock Chalk!

I think Stuckey is likely to be the best of this year's crop of Jayhawks. The secondary was horrendous last year but we all know that Stuckey has been a playmaker his entire time at KU. I think having inconsistent/young corners made him come in a bit underrated. His junior campaign was amazing and I think that is more in line with his skill. Hell, it would be awesome if the Chiefs could snag him in the 3rd or 4th round. I think Darrell will be playing for a decade in the NFL.

Frankenhawk has it right. The drills are great, but he will clearly excel in the interview process, which is probably the biggest factor of where you go in the draft. I have a feeling he's going to be picked a lot sooner than any mocks have him going

Stuckey was probably my most favorite player from the 2008 team. He single handedly changed that Fizzou game at Arrowhead. He intercepted a pass, forced a fumble, recovered a fumble, and I think he lead the team in tackles that game too. Just a beast on D. Amazing performances on big stages. Kid's a stud and will make a hell of an NFL Safety. Show 'em what ya got, Mr. Stuckey! You make us all proud to be KU football fans.

no. chiefs....DON'T draft him! you'll find a way to ruin him like you do everyone else!

We picked up a HUGE football committment from Darrian Miller last night at the KU / KSU game! Freakin' Heck Yes! I'm looking for Gill & Co. to have a great year recruiting.

Good for Darrell. On the other hand, Todd McShay picked Dezmon as a player who's stock has dropped the most.