Stephen Vinson, center, is mobbed by Aaron Miles (11) and Mario Chalmers after Vinson scored the winning basket in the final second of the Rock Chalk Roundball Classic. Former Jayhawks participated in the game Thursday night at Free State High. 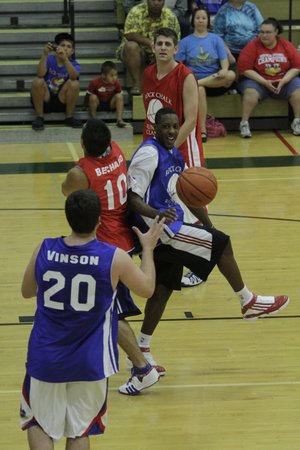 Mario Chalmers, who, as all Kansas University basketball fans know, has a flair for the dramatic, lofted a three-point shot from the corner with time running out in a tie game in Thursday’s Rock Chalk Roundball Classic at Free State High.

Jayhawks from years past returned to Lawrence to help raise money for families in need at the Rock Chalk Roundball Classic. The event was held at Free State High School.

This time — unlike the 2008 national championship game — the long-distance attempt missed, but was tipped in by teammate Stephen Vinson, allowing Chalmers’ Blue team to tame the Billy Thomas-led Red squad, 93-91.

“We were trying to do the same play we did to win the 2008 championship,” said the 6-foot-1 Chalmers, who hit a three to tie Memphis at the end of regulation, before KU rolled over the Tigers in overtime.

“The Red team started hacking and playing all types of crazy defense, so we reverted to something else,” added Chalmers, who finished with 29 points off 11-of-28 shooting.

It mattered not that it appeared former KU guard Vinson might have scored after the final buzzer.

This KU all-star game was for laughs and also for charity. All proceeds benefited a pair of local families affected by cancer.

“It’s like being with brothers,” Chalmers said. “Our ’08 team is like brothers. It’s good to be playing with Russell (Robinson, eight points) and D-Block (Darnell Jackson, 13 points) and see some of the old players who were here my freshman year like Moody (Christian, 19 points) and Steve Vinson (six points).”

Chalmers, who just completed his second season with the Miami Heat, remains a hero in Lawrence.

“Not 30 seconds, if that” Chalmers said, asked how long it takes for somebody to recognize him here and ask him about “the shot” versus Memphis. “I had somebody on the plane come up to me before we landed. It’s always fun to come back here. I’m a familiar face.”

He’ll be back for his second-annual National Championship Golf Classic — July 23 at Alvamar — to benefit his foundation.

“It never gets old,” Chalmers said of returning to Lawrence.

He was able to compete against KU’s current players in Bill Self’s campers game on Wednesday at Horejsi Center. He’s also participated in some pick-up games.

“Tyshawn is my protégé. When I came in here, I had people to look up to, so when Tyshawn came, I was the person he kind of looked up to,” Chalmers said of junior Tyshawn Taylor. “For us, it’s kind of personal. I try to make him better because he’s kind of my protégé.”

On Wednesday, in the alumni’s 20-point loss to the current Jayhawks, Chalmers was impressed with KU’s frontcourt players, including Marcus Morris, Markieff Morris, Jeff Withey and Thomas Robinson.

“When I played here, it was most of the guards doing the work, until Darrell (Arthur) got here,” Chalmers said. “It’s different now. The bigs are doing most of the scoring, and the guards most of the playmaking. The bigs were the ones who stood out (in campers game).”

Jackson and Robinson arrived after the opening tip of the Roundball Classic.

“They made it clear to me there’s an opportunity there,” said the 6-foot-1 Robinson, who averaged 16.3 points a game for NBA Developmental teams in both Reno, Nev., and Portland, Maine, this past season.

“I just have to go there and play well. That’s what I’m going to try to do this summer.”

“I would love to be his teammate,” Robinson said. “It’d mean me being in the NBA. Hopefully I’ll be in the NBA next year.”

The 6-foot-9 Jackson, meanwhile, was picked up by Milwaukee after being released by Cleveland.

“I just got here. I drove fast from the airport. I was probably doing 105 (mph),” Jackson said. “Nah, I was going the speed limit, wearing seat belts. I’ve been in Milwaukee since the end of March. It looks real good. All I can do is keep working out every day. Hopefully it’ll pay off at the end. Nothing is guaranteed until after summer league. After that we’ll find out what’s going on with me and Milwaukee.”

Former KU guard Billy Thomas, who has officially retired from pro basketball after playing for Maine in the NBADL this past season, scored 22 points off 9-of-22 shooting. ... New Perry-Lecompton basketball coach Jeff Hawkins, who hit a 40-footer, scored 15 points. ... Christian Moody, who just completed his first year of medical school at KU, scored 19 points. He and his wife recently welcomed baby boy William into the world. ... Former KU center Scot Pollard, who hadn’t played pick-up basketball in over a year, scored 17 points and had several dunks. “I was surprised at the dunking part. I didn’t know that was going to happen,” Pollard said. “The rim got close enough so I could put it down.” ... Of teammate Vinson tipping in the game winner, maybe after the buzzer, Pollard said: “Yeah, the Blue team won. I don’t think it was rigged. I think he (Chalmers) missed on purpose, and it was a heck of a tip by Stephen." ... Aaron Miles, who played in Greece last year and now makes his home in Lawrence, had five points and numerous assists and might have had the most fun of anybody playing. He said he’s not sure where he’ll surface next season. “Whatever God wants me to do. I’m happy whatever comes my way,” Miles said. “Definitely if the opportunity presents itself in the NBA, that is what I’d love to do. If I have to go overseas again, I love that as well.” ... KU staff member Brennan Bechard came out sizzling, hitting his first three threes en route to 11 points. ... Lester Earl, who like Pollard hadn’t played pick-up ball in a long time, dropped in 10 points.

Sherron Collins will struggle to keep his weight above 185.

Speculation about Bill Self wearing a rug will cease.

Lew Perkins will begin speaking with a Cockney accent.

Chancellor Bernadette Grey-Little will announce she is going blond all over.

Turner Gill will reveal that he wants KU to run the option nude from the waist down.

Don Beebe will admit that his brain is the size of his name.

DeLoss Dodds will admit that his real motive in trying to wreck the Big 12 was to drive K-State down to Division II.

Paul Pierce will wake up and find that the Celtics actually beat the Lakers.

Dr. Tom Osborne will announce that he has to wear sun screen even in a sensory deprivation tank.

Frank Martin will be recognized as a role model for anger management by the Quakers.

Doc Sadler will win 30 games in a season, while wearing undersized suits by Tom Ford.

The Antlers will be found not to be off-spring of six generations of Confederate incest experiments.

The Big 12 will be renamed The Big Sportsgasm.

The University of Texas will announce that its starting quarterback is a hermaphrodite named Betty-Bob.

Colorado will not suck at everything it tries.

John Calipari will start two guards that can read.

Rick Barnes will admit he cannot coach and surrender to auto-eroticism.

Jeff Capel will go more than a season without squandering a great talent and admit that he could lose with his'n or with your'n.

Pat Knight will admit that dissatisfied TTech alums regularly threaten to put him in a barn stall with a rutting bull, or let Dick Cheney shoot him in the face at a private hunting club.

Mark Turgeon will announce that College Station is like living in the arm pit of a very fat man in August.

Scott Drew will announce that he is a Satanist trying to lead the Baylor to the nether regions.

Fred Hoiberg will change his nickname from The Mayor to The Fuhrer and turn Ames, Iowa into a police state.

Top two favs: The Lew Perkins accent (always reminded me of the Dancing with the
Stars British judge anyway)

These numbers are probably better than their career averages!

Proud of you guys for the contribution to these good causes and the reminder of how many ways KU Sports is more than just about revenue for the school and the conference.

there had to be a moemnt, in which leseter earl lined up a free throw and forgot to shoot it....

Cannot be a lester earl highlight without him forgetting to shoot a free throw...

I would pay good hard American cash to see an email debate between Jaybate and Soobawls...about anything.

It would be a classic for the ages!!!

PS Happy Fathers Day to all you Jayhawk Dads and all you Dads of Jayhawks. Have a great day and don't do anything!! [Not a Dad myself..tried..still, 7 nieces and a nephew keep me busy]

Coffee out my nose, and Eggo on my flat screen.

Is it me, or does Vinson look like Tony Montana in that pic?

And Mario has a Hannibal Lecter feel.

Is that Lester Earl in the background by the official in the picture? If it is Lester Earl, I sure don't remember him being that skinny.

Wish I could have seen that game too! Too cool.
Yeah that is Lester Earl.

I particular like the Barnes jab. It boggles my mind how Barnes can still get such good recruits after falling short year after year after year. Last year's epic collapse may have been the most dramatic edition of his failure to be able to coach, but his ability to underachieve with such high levels of talent is consistent year after year.

Has anyone heard from Beakoflight over in Iraq? I worry when he doesn't post for awhile.

Does not suprise me if he has not posted in awhile. My brother is EOD and has deployed to Iraq and Afg. a combined five times already and sometimes the military will shut down internet communication for various reasons and we wont hear from him for awhile, its pretty routine.

Still makes one worry though.

Thanks for the headsup. I will include your family member in my prayers as well. And Beakoflight, if you see this, we are trying to hold the legacy together for you, while you are away during Scalpinggate and Realignmentgate.

Though you have not surprisingly acquired a taste for soo, i have felt for some time that soobawls has been only partly appreciated, soo...

Appears on Hardcore Devo vol. 1/1994 re-release versions of "duty now for the future