Former Kansas basketball player Keith Langford, who graduated from KU in 2005, has a younger brother, Justin Wesley, who will play for the KU men's basketball team during 2010-11 season.

Kansas University sophomore walk-on Justin Wesley tried to keep his eye on the basketball at all times during Wednesday’s Bill Self campers game in Horejsi Center. 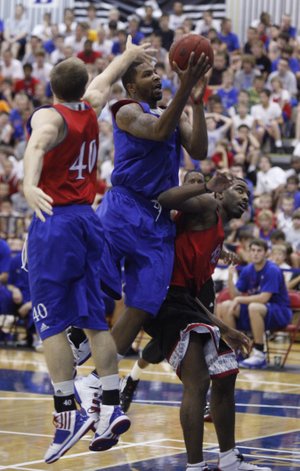 That proved an impossible task since one of his teammates on KU’s Red Team happened to be his role model and “hero” — older brother, former KU standout Keith Langford.

Former KU basketball players were back in Lawrence to play against the current Jayhawks in session two of Bill Self's basketball camp. Players such as Mario Chalmers and Keith Langford put on a show in front of the fans.

“When I watch him play, I’m always amazed. He’s somebody I look up to and try to model my game after,” said Wesley, a 6-foot-8, 205-pound transfer from Lamar University, who scored two points to his brother’s nine in the Red team’s 65-45 loss to the Blues.

“I kind of wanted to play against him just from a competitive standpoint,” Wesley said. “It was still fun playing alongside of him.”

Truthfully, it was fun just being in the same building.

“Growing up, he was the father figure in our house. Being away from him was hard. Seeing him was a breath of fresh air,” Wesley said.

The 26-year-old Langford, who is KU’s seventh-leading scorer of all-time, averaged 15.5 points, 3.5 rebounds and 3.0 assists while helping Khimki to a second-place finish (to former KU center Sasha Kaun’s CSKA Moscow team) in the Euroleague.

“It’s crazy because now I’ve gotten to play with both of them now,” Langford said of his younger brothers, Wesley and Kevin Langford, a former TCU small forward.

“In high school, Kevin was a freshman on the (North Crowley High, Fort Worth, Texas) varsity. I got to play with him a little bit. Justin was out here today.

“Last night, I was watching him play pick-up. Seeing him go from a little guy to being here and experiencing all this ... how many people in the population really get to go through the special thing we have here at KU?”

Langford said he is “extremely excited” to have his sibling follow in his footsteps.

“It just happened he started out at Lamar. A lot of times in recruiting, a situation doesn’t go as always promised. It’s kind of what happened with Justin, and long story short, it was a dream of his to come here. I made a call to coach (Bill) Self. Justin is definitely a project to take on so it’s a fit for both sides.”

Keith realizes his brother is taking a gamble walking on at a school with a roster full of talented players.

“When I arrived at KU in 2001, who would have thought I’d come away seventh-leading scorer? That was never in my wildest dreams,” Langford said. “If you want to go by scouting reports and websites and all that stuff, you never can do that. If a guy fits, if the guy has potential, has tools, you never know what can happen here. Christian Moody (nine points for Red team), myself, Jeff Hawkins (three points) ... there’s a lot of different stories and ways things can work out.”

Keith wouldn’t let Wesley come here if he didn’t think it’d be the experience of a lifetime.

“I mean, Justin’s father passed away when he was young,” Langford said of Wesley, who has the same mom, different dad. “Being in the house, I had to be there for my younger brothers. It’s more a responsibility thing. The thing about him is he listens. That’s part of the reason he is here now.”

Wesley has followed brother’s career closely. He watched Langford play in the Final Four in 2002 in Atlanta and 2003 in New Orleans.

“When Keith was here, I always used to come to the games. I can’t even tell you how many, but I went to a lot,” Wesley said. “I used to love coming here. Once Keith graduated and time went on, I started to miss it. Being here is awesome — a great feeling.”

Keith said he had a positive experience in completing the first year of a $2.3 million deal in Moscow.

“It is an incredible city. A lot of people look at me crazy when I said I liked it better than (playing in) Italy,” Langford said. “You can get everything from Papa John’s to Applebee’s and TGI Fridays. Everything is in English.”

As far as development of his own game ... “Individually, I had a really good year trying to continue to make a name for myself in the European market,” Langford said. “In the Euroleague, we advanced pretty far, losing to Sasha in the finals. It was a good year.”

He wishes the alumni and KU newcomers on the Red team could have kept the score closer against KU’s returning players. Mario Chalmers led all scorers with 15 points. The Blue squad was led by Marcus Morris and Conner Teahan, who had 11 each. Winner was first team to 65 points.

Woolridge’s knee OK: Newcomer Royce Woolridge scored seven points off 3-of-3 shooting for the Reds. He hit one three.

The 6-3 guard is feeling better after getting hurt in one of his first pick-up games in town.

“I strained a muscle in my knee. I iced it three days, and now I’m good,” he said. “Mine was a day before Josh (freshman guard Selby, who broke his left pinkie in pick-up). I was on the sideline watching him. He comes out his first game and just messed up his pinkie.”

Selby will be out of action three more weeks. “We’re hoping to speed it up,” he said of the four to six week recovery time.

“It’s a lot of fun. The community is great,” Selby said of Lawrence. “People communicate with you, say hi to you. They welcome you in.”

Mario leads way: Chalmers, who just completed his second season with the Miami Heat, had 15 points off 6-of-13 shooting. He sank three three-pointers.

“I forgot how easy it was in college to dunk,” said Chalmers, impressed with Tyshawn Taylor ramming a dunk after a steal. “You see I can’t jump like that any more. It was fun for us, the campers, everybody.”

Good to see Langford is making good money playing overseas. As I recall, he was making over $1 million per year in Italy. KU basketball has definitely paid off for Keith!

I want to say it was 500k/yr in Italy and then the Russian team gave him more money over three years.

good thing that Justin Wesley has a transfer year that he has to sit out. It looks like he needs to spend some quality time getting to know Andrea Hudy.

I wish we could get a better turnout from Alumni at these camps. I know that recruits love to hear about the opportunity to play against our Jayhawk pro's and show their stuff.

Yeah, what is Paul Pierce up to these days? He doesn't have much going on.

Gosh it's good to see Mario again.... what sweet memories.

} Keith Langford is a great example of how much difference there can be between the appearance the media create and a fan imputes vs. what a player was really like.

Seems: I was a fan of Langfords and believed he could have been waaaaaay better even than he was (7th highest scorer of all time) had he stayed healthy. I felt he did not fit well at all into Self's offense, that he was the purest example of the cost of Roy's breaking of his word to KU, and that Keith made a huge sacrifice for Self to become essentially a starting glue guy his last season. Finally it seemed to me that relations between Self and Langford were at most tolerable.

Was: In retrospect, especially from this story, and now understanding Self Ball, Langford was one of the purest examples of a Self Baller KU has had since Self started. Terrific defense. Protected the ball. Fed the post. Extremely athletic and a strong finisher at the rim when he wasn't hurt to badly. Played through unbelievable pain. He was in fact the proto typical Self Ball KU player that has come since. And now we know that Keith had yet another dimension that Self's quintessential Self Ballers have. They have strong loyalty to their families and they carry amazing loads in their families, when most of the middle class players are simply being college kids. Keith was and still is looking out for his family. And once again Self makes clear that he doesn't forget what people have done for him. My hope for Justin is that he embraces the "get better" philosophy and one game, say, 2 years from now, he gets that look and plays Self Ball and becomes the next of many memorable Self walk-ons. My hope for Keith Langford is that he knows how much respect he deserves for living his life as he has. He's all Jayhawk.

But the real question is.... did he change his shoes at half time?

According to NBA Draft Express, (very reliable scouting-report website) Langford is now the #2 ranked overseas free agent -- E.G. players who are expected to land on an NBA team.

Here is the most recent scouting report on Langford from their website.

"The former Kansas player and Mozgov’s teammate in Khimki has emerged as one of the best American guards in the Euroleague this season, improving his playmaking and perimeter shooting skills substantially while still maintaining the same athleticism and terrific activity level that made him an intriguing player to begin with. The fact that he’s legitimately playing the point guard position, having improved his basketball IQ significantly, combined with his aggressive slashing mentality and strong defensive skills make it a practically a no-brainer for an NBA team to give him an extended look.

The only problem is that Langford signed a 2-year deal this summer for well over a million dollars per and no out clause, meaning any team that wants him would probably have to negotiate directly with the Russians. It’s possible that might keep him out of the NBA until 2011, although there is always room for negotiation in Europe."

"Seeing him go from a little guy to being here and experiencing all this ... how many people in the population really get to go through the special thing we have here at KU?” Aside from his incredible ball-playing abilities, this is why I have always loved Keith Langford. This is why my handle is "KoolKeithFreeze". He remains a part of the family. And Jaybate, I am not sure, but I always thought the strained relationship at the end of Keith's time as a Jayhawk was between he and J.R. Giddens, but that may have been hearsay...

Always thought it was a shame the way Langford's career ended at KU... with spraining his ankle against Missouri and having food poisoning prior to the Bucknell game... certainly no way they lose that game if he had been healthy... glad to see him making some money in Russia...

How is the greatest walk-on in KU basketball history, Christian Moody, doing. Is he close to being an M.D. yet? Does he still have that great inside move?

My guess is that Self told Chalmers let Taylor dunk on him once to try to pump Tyshawn up.

I interpreted Mario's comment as a sly one, as dunking amongst college kids, or even the pros is not quite the same as dunking through the big timber in the L.

I am sure Mario can still go up whenever he needs to.

Walk-ons need to sit a year? With no scholarship, I don't get it. Can someone explain..sorry if it's a dumb question.