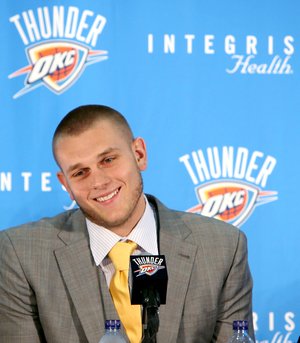 Cole Aldrich reacts with a smile as he answers questions during a news conference Monday at the Thunder practice facility in Oklahoma City.

Cole Aldrich, who was traded from the New Orleans Hornets, was introduced as the newest member of the Oklahoma City Thunder today.

The 6-foot-11, 250-pound center out of Kansas University sported a light beard.

Aldrich, the No. 11 overall pick in the 2010 NBA Draft who was traded from New Orleans to Oklahoma City on draft day, won some supporters Monday after already familiarizing himself with players such as Harden, the bearded No. 3 overall pick of OKC in the 2009 draft.

“The first time I was ever able to talk to the coaches or guys on the team was when I first got to Orlando on Thursday. That’s when the trade finally went through,” said Aldrich, who was not allowed to play in the Orlando summer league while awaiting league approval of the deal.

Instead, he sat on the bench and watched the games.

“One thing that impressed me was the family camaraderie. Everybody hangs out with everybody,” Aldrich said of the Thunder players. “There’s no small groups. That’s a huge deal. You don’t always see that in the NBA. You hear about so many different things. Everybody goes off and does their own thing. This is really a tight-knit group.”

“I like Nick a lot,” Aldrich said. “There’s times that you are a young kid at a university and guys playing in the NBA and you just love to see them come back. You love to see the Nicks, Paul Pierces, Drew Goodens all come back and hang around because you almost idolize them.

“Nick came back quite a bit over the years at KU. We grew a really nice relationship, text once in a while. Being with another KU guy will be fun.”

Collison — he is rehabbing his right knee, which needed arthroscopic surgery in mid May — told the Journal-World that, “Cole’s the type of guy Sam (Presti, OKC general manager) usually likes to get. He’s a good teammate, works hard, is long, athletic and young. He’s the same age as most of our guys. He’s a good pick-up for our team.”

Presti on Monday explained why he’s so enamored with Aldrich.

“Cole really shares the same mentality and approach that we try to embody with our team,” Presti said. “He’s another hard-working, high-character player.”

Coach Scott Brooks already has held one private workout with the hard-working Jayhawk.

“We broke him in Thursday morning at 6:45, a quiet little workout,” Brooks said with a laugh. “He’s about toughness, defensive mentality and doing the right thing every time on the court.

“We have a good team right now, young players committed to getting better. He will fit in there with them all. I like that he does the little things, ones you don’t talk about a lot, that win basketball games. He’s done that his entire career. From the program he is from, Kansas, we’re thankful we were in position to draft him and are excited to have him.”

Brooks added that Aldrich, “protects the basket, rebounds, sets great screens, is a great outlet passer. ... we’re not looking for him to come in here and be a big-time scorer.”

Aldrich believes he can contribute immediately on the defensive end.

He related a story about how he always has loved defense.

“I was … I wouldn’t say a bully … on the court, but I was bigger than everybody so I just loved to block shots and rebound,” he said of growing up in Minnesota. “If somebody comes in the lane, I don’t want them to score. I take real pride in blocking the shot or altering the shot or (making opponents) pass it out. I’ve always liked to think that the paint is kind of my home, and I don’t want anybody coming in my home.”

As far as playing time ... Brooks uses a nine-man rotation and all nine players are back.

“It’s going to be tough,” Aldrich said. “They just don’t hand out anything. That’s been my whole life. I’ve had to work for everything.”

What will he need to do to earn the money by playing?

“Being a bully is not bad,” Brooks said. “Minutes? Who knows. We’ll have to see how he continues to get better the rest of the summer and training camp.”

Notes: Aldrich’s parents, Walt and Kathleen, attended Monday’s news conference. ... Cole Aldrich was asked by a fan on a the team’s official website how he felt about the squad’s colors, jersey and mascot. “Anything is better than purple,” he joked of Kansas State’s colors. ... Collison to the Daily Oklahoman on his rehab: “You’d always like to be spending more time working on your game than getting healthy, but it's part of the job.” ... Thunder GM Presti on Aldrich’s college days: “Guys who make the routine play are guys found in winning programs. Speaking of programs, he comes from an elite program in Kansas. The team had the highest RPI this past season, played the toughest schedule in college basketball, was a top-10 defensive team. He’s coached by a great coach in coach (Bill) Self, someone our program respects and knows.” ... Aldrich will wear jersey No. 45 in OKC. ... Aldrich on KU teammate Xavier Henry being from OKC: “I told Xavier I was going to take over his house — I was going to live rent-free at his house. He didn’t like it very much. It’s fun to have guys on our team from Oklahoma City. That Midwest personality, that is of a humble, hardworking person.” ... Former teammates Darnell Jackson and Jeremy Case and coach Self also hail from Oklahoma, Aldrich noted: “Talking to the guys, they love the town. It’s a town of hard workers. You could see it from them when I was on the court with them. It’s a town of putting your work boots on every day and going to work.”

In other notes, Darnell Jackson got 17 points and seven rebounds in yesterday's NBA Summer League game against Dallas. He was supported by former Jayhawk, Micah Downs, who hit two treys for six points and opposed by another former Jayhawk, JR Giddens, who nailed sixteen points for the Mavs.

What, no Alex Galindo or David Padgett news?

You realize Cole, that you're sporting a Pullen chin strap?

On a side note: Charlotte Bobcats just traded Tyson Chandler and Boris Diaw to Toronto for Jose Calderon and Reggie Evans.

Looks like the Bobcats are giving up a lot to find a point guard. Makes Collins chances even more difficult at the moment.

The trade was called off and Chandler was subsequently traded to Dallas for Eric Dampier, Matt Carroll and Eduardo Najara... no PG's brought in after all... MJ nixed the deal based on his review of the talent they were receiving from Toronto, and might be playing the "trade game" with Dampier's contract wave-able, it might give them an interesting trade chip. the Bobcats either did this because a) they're comfortable bringing in two summer league PG's to back up DJ Augustin, or Jose Calderon wasn't the right fit (or wasn't enough of an upgrade) to Augustin where giving up Chandler would've been worth it. As a KU fan I'd like to think the 2 summer league PG idea is the most likely, but i doubt it... plain and simple, Augustine isn't a qualified starter in the NBA and none of the summer league PGs including Collins should be counted on to be the primary backup for Augustin... Collins would be best served being the sole summer league PG to be called up, and for Charlotte to use Dampier to trade for a much better PG than Calderon so that Collins has less pressure, can learn from someone worth following, and can grow into a role until Augustin's contract expires and Collins becomes the primary backup PG (with the potential to start in case of a starter's injury or crazy improvement on Collins' part).

hey you can see his interview with the thunder here:

I love how Aldrich forgot about Ben Woodside's name from NDSU. Easy to do when you get Ali Farokhmaneshed

It looks like someone dumped water on his shoulders in the jersey picture at the top of the page.

“Minutes? Who knows. We’ll have to see how he continues to get better the rest of the summer and training camp.”--Scott Brooks

OMG! They have even taught Brooks to speak like Self, so that it will be easy for Self to plug in, when Self is ready!

“Cole’s the type of guy Sam (Presti, OKC general manager) usually likes to get. He’s a good teammate, works hard, is long, athletic and young. He’s the same age as most of our guys. He’s a good pick-up for our team.”--Nick Collison

Nick is going to be the next KU player to become a General Manager. He speaks like one already. Clearly, his father has told him, Nicky, don't waste your time coaching. Be the real chief. It is better to have only one guy--the owner--that can fire you, rather than two--the owner and the GM--when you are a coach.

Quick, someone hire Pritch as their GM, so Pritch can hire Nick and his gimpy joints as an assistant GM to start Nick's inevitable rise to power in the NBA. Anyone noticed how teams with former players as GM's, win more rings? Gee, I wonder if it is because they really know what the @#$% the NBA is all about?

"It is better to have only one guy--the owner--that can fire you, rather than two--the owner and the GM--when you are a coach."

three - the star player on the team.

Cole is going to have to be careful with that beard. If he keeps it for long, they are going to want to make him a guest star on that TV show about the polygamists in southern Utah. And that could lead to a trade to the Jazz!

The Cole Aldrich video from above shows where he forgot the name of Ben Woodside from NDSU. Woodside is playing for the Golden State Warriors and has started 2 of his 3 games.

He plays later on tonight, but Aldrich better remember his name because he may be running into him in the near future possibly.

Aldrich seems to still talk about things related to KU a lot. I hope he's ready to move on and embrace the fact that he's a pro.

Any updates on Selby? I haven't seen an article on him for a while. I guess I could've missed it, though.

No updates. He's still the #1 recruit in this year's incoming class and we've got him!

I heard he's been seen strolling across Potter's Lake!