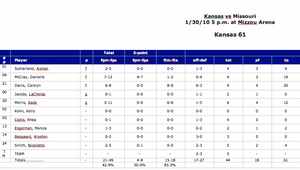 KU senior Danielle McCray scored in the first minute of the second half to put Kansas up, 32-26, but the Tigers stayed within six until the 12:04 mark , then tied it at 44. McCray and senior Sade Morris scored the next 13 points for the Jayhawks.

With 4:07 left, the teams were tied at 55. McCray and Davis scored the next four points, but Missouri answered.

KU took a 61-57 lead with 1:50 left, but the Tigers pulled within two with 1:02 left and regained possession of. The Jayhawks stepped it up on defense and held on to win. Davis, McCray and Morris scored all but two of the team’s 31 points in the second half.

McCray finished with 19 points (4-of-7 from three), four assists and four rebounds, while Morris had 12 points and six rebounds for the Jayhawks. Davis was 8-of-8 from the charity stripe and has scored in double figures in four of the last five games since moving into the starting lineup.

he Jayhawks held Missouri to 35.6 percent from the field and only 18.8 percent from three-point range. In addition, Kansas outrebounded Missouri, 44-26, with 17 of those coming on the offensive end. The 11 Missouri defensive rebounds marked the lowest amount for a Kansas opponent this season.

Jessra Johnson and Shakara Johnson led the way for the Tigers with 16 and 12 points, respectively.

Kansas will return home to host Kansas State for the third-annual Jayhawks for a Cure “Pink Zone” game on Sunday. Tipoff is 1 p.m.

One game at a time. That's how you get back into the mix. I have faith that they will make the post-season. All they have to do is take care of business.

Yeah, losing Goodrich hurts, but we have talent at every position. I'm looking forward to seeing our women in the BIG DANCE!

I'm thinking these wins are each as good as a blowout, but can we be just a little bit less parsimonious with the margins of victory?

The smaller margin of victory gives the fans of those teams a harder stinging feel of Losing.

nice win, and frankly Bonnie needed it. this gives them a shot for a winning record in the league....but we will have to steal a game or two somewhere.

Missouri really isn't that good...and no matter where this game is played, KU should win handily.

we get a week to prepare for k-state in the rematch. this is one of those steal one games....let's get 'er done lady Jayhawks!

we get a week to prepare for k-state in the rematch. this is one of those steal one games....let's get 'er done lady Jayhawks!"

I disagree, this isn't a "steal one" game.

As long as they play their game, the entire game, I believe that they can defend their home court against anybody and come out of the matchup with a win.

i have a really sad story. we were at the game on wednesday at home vs. colorado and i was a little surprised to see angel wasn't on the bench when we got there. then shortly after the game started, she comes in hobbling on crutches w/ her mom, and sits in the wheelchair section down behind the basket. a lot of people stopped by and talked to her and hugged her and stuff so that was good but she just looked pretty down and the worst part was when i looked over and angel had her head in her hands and when she looked up she was crying. it was just really really sad.

Kansas is sitting in 7th place in the Big 12 Standings... a lot of upsets happened today, which put a huge cluster-f*ck in the middle of the Big 12. Nebraska is still leading with Okie State behind them... but after that... it's anybody's guess.

KU still has a very good shot at getting some wins... starting with Kansas State next Sunday. And then we HAVE to beat Nebraska...