Taking his shot: 42 points or not, Brackins just wants a win

Iowa State’s Craig Brackins, right, puts up a jumper over former Kansas forward Quintrell Thomas, left, and Mario Little in this Jan. 24, 2009, file photo in Ames, Iowa. Brackins exploded for 42 points, but the Cyclones still fell to KU at Hilton Coliseum. Brackins said the 42 points didn’t matter to him because of the game’s result.

The Jayhawks are looking to repeat last year's victory against the Cyclones on the road Saturday. Kansas will also look to contain Craig Brackins, who exploded for 42 points against the Jayhawks last season. 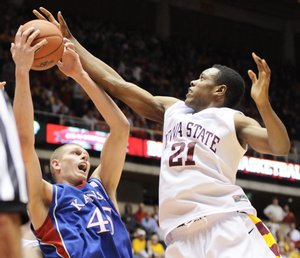 Though the 6-foot-10 forward was just two three-pointers shy of a record-setting performance against the tradition-rich Jayhawks, Brackins had no problem abdicating to the Cyclone reserves, who ran out the clock on an 82-67 defeat.

“Coach ‘Mac’ felt we couldn’t win the game. He didn’t want anything stupid to happen, me getting hurt or anything like that,” Brackins said of coach Greg McDermott. “He did the right thing. I think it was the right move.”

Maybe McDermott was giving Brackins something to shoot for today — Jackson State’s Lindsey Hunter lit up the Jayhawks for a single-game record 48 points in 1992 — when the Cyclones again play host to the Jayhawks in a 1 p.m. tipoff in Hilton.

“I don’t know. If my shots fall, probably, but that’s a lot of points,” Brackins said, asked if he could envision scoring, say, 50 or more points in a college or NBA game.

• seventh most points scored versus KU and most since Oklahoma State’s Randy Rutherford’s 45-point explosion on March 5, 1995, in Allen Fieldhouse;

• most surrendered by KU in a Big 12 game, exceeding the 39 scored by Kansas State’s Michael Beasley on March 1, 2008 in Allen;

“After the game, a lot of people told me,” Brackins said of all his feats set last Jan. 24. “It didn’t really matter because I was so bummed about the loss. I felt we could have beat them.”

Just a few hours before tipoff, Brackins figured he’d have a tough time scoring one basket, much less finishing 11-of-19 from the field (3-of-5 from three) and 17-of-21 from the free-throw line.

“I didn’t feel confident going into that game. I couldn’t make a shot in shootaround,” Brackins said. “It was one of those days. Those are the days you try a little harder to make shots.

“I guess the way they guarded, I felt a lot more comfortable. I think I hit my first couple shots. You can ask my coach. If I hit one shot right away, that’s when I feel like it’s going to be a good day.”

It turned out to be a career day, one he has not yet duplicated.

“That was a lot of points. I never saw myself scoring so many points,” Brackins said. “It was just one of those games where a lot of shots fell for me, and it went my way.”

He didn’t have nearly as productive a game in the rematch in Allen Fieldhouse. Brackins scored 20 points off 7-of-21 shooting in the Jayhawks’ 72-55 victory on Feb. 18.

“When we played them in Lawrence, they pressed me a lot,” Brackins said. “Every time I shot the ball, they tried to get up under me a little more. They didn’t want to give me much space. I think playing them again, I probably pressured a lot of shots.

“It was an OK game. We couldn’t score toward the end, and we lost it.”

Is Sherron Collins the best player in college basketball today?

ISU actually may have beaten the Jayhawks last season in Ames if not for the play of guard Sherron Collins.

The 5-11 point guard exploded for 18 points the first 12 minutes, had 18 at the half to Brackins’ 22, and finished with 26 points off 10-of-19 shooting. Cole Aldrich added 16 points, while Tyrel Reed and Tyshawn Taylor totaled 10 apiece.

“Maybe themselves — if they don’t show up to play,” Brackins said, asked to pinpoint any possible weaknesses of the No. 3-ranked Jayhawks. “Kansas is a real strong basketball team. It’d be tough to beat them, but I’m sure it could be done.”

Brackins is hoping for a huge win today, one that would bolster Iowa State’s NCAA Tournament hopes. He desperately wants to play in the postseason in what could be his final season in Ames.

“Win the Big 12, just be in the top half of the conference, make the NCAA Tournament, win 20 games. There’s a lot of goals. Basically to win. Do what it takes to win,” he said, indicating he’s playing for ISU’s loyal hoops fans, who are desperate for a winner.

Those same fans would love to see Brackins put his Cyclone teammates on his back again today and pile up similar stats as a year ago. It’d be a nightmare relived for KU if that happens.

“He put on a show. I wish I could tell you that our game plan was to stop everybody else and make him make all the plays. That was not the case,” KU coach Bill Self said.

“I thought we did the best job late when Cole switched on him,” Self said of 6-11 Aldrich, who guarded Brackins after the Morris twins, Mario Little and Quintrell Thomas gave it a shot. Marcus Morris is expected to open on Brackins today.

“We could have put Cole on him, but we wanted to save him (from foul trouble).”

“It was definitely up there,” Aldrich said, asked if it was the best performance he has seen from a big man. “He was throwing up shots. He probably could have gotten it inbound and just thrown it up there and it would have gone in. I think it was one of those games for him. It’s fun to see a player like that really play hard.”

It was also fun to watch Collins that day.

Whenever a player hits for 42, the opposing coach has to feel relieved to leave with a victory.

The boys better show up to play tomorrow...Staiger is gone which is nice news considering he was their 3 point shooter...I think we will play better defense on Brackins tomorrow afternoon. He is a great player though.

with the way we've been playing lately, i have a hard time believing we'll beat any big 12 team (save maybe colorado) by 20 points or more.

sorry, i was too quick to forget about the TT game... okay, save maybe colorado and texas tech.

If KU doesn't try to dictate a faster tempo:

If KU does a better job trapping and causing turnovers and pushing tempo:

Minus Steiger, could this game against ISU be against an undermanned, easy-to-overlook, just-ahead-of a-big rivalry-game opponent, a la Tennessee? Hope not.

This is my thinking, too! Brackins is a good player but we'll be ready for him--we'll play better defense. Good luck, Jayhawks!

Who will draw the defensive assignment of Brackens? I think the Jayhawks can outscore the Cyclones as a team and that is what will effect the standings, not how many points an individual scores.

docileboy - I'm thinking Marcus starts out on him. It's either that or X. Brackens is what? 6'10"? Can't really have 6'3" Brady Morningstar on him.

Brackins will get his points for sure, but Mc is also more experienced and has really improved his game too. We need to make it difficult for Brackins to get into any rhythm or even get many touches outside. Force them to go inside and face Cole or Mk. Perhaps a zone a good part of the game w/Brackins? switch to man w/o Brackins?

truehawk - I'm not saying a zone won't work, but it's kind of hard to deny a guy a pass on the outside (as you suggest) if you're playing a zone. The whole point of a zone is to deny passes inside and force them to beat you from the outside. A box and one sounds like a good idea, but I remember last year we tried doing that a couple of times last year and we didn't have much success and HCBS scapped it.

This team is not very good simple as that.

We have chemistry problems. Look at the body language of this team.

I really hope I'm wrong on the chemistry problems. I just don't understand why we just can't seem to click on all cylinders. We truly have only looked great in the Temple game.

I like seeing Cole and Jeff out there together.

What in the world is going on with X ? John Wall is certainly distancing himself from X. Hope he finds his range soon.

okay, back here to eat my words.

i'm hoping my prediction continues to prove me wrong through many more conference games...

that's a good, solid win....KU...and we want to be careful here as not let everyone else in college bball know...is getting better....ssssssshhhhhhhhh!!! tee he.