Players scramble to come up with the ball during the Jayhawks game against Oklahoma. Kansas lost the contest on the road January 23, 2010. 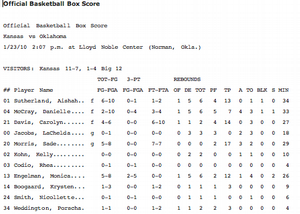 Oklahoma blitzed the Jayhawks late in the first half on the way to an 81-69 victory Saturday afternoon at the Noble Center.

It was KU’s 17th loss in its last 18 league road contests over the last three seasons and the Jayhawks’ fifth defeat in their last six games.

For the second game in a row, Kansas senior standout Danielle McCray was ice-cold. After scoring just six points in Wednesday’s loss at Iowa State, the 5-foot-11 senior managed only seven points Saturday before fouling out with 4:18 remaining.

In those two sub-par contests, the Big 12’s second-leading scorer missed 18 of 23 shots, including all nine of her attempts from three-point range.

“The bottom line is, if you can’t make a shot, I still need you to rebound and guard,” KU coach Bonnie Henrickson said of McCray, “and she wasn’t guarding.”

At the same time, Henrickson wasn’t overjoyed with the Jayhawks’ overall performance.

Kansas started quickly, bolting to a 16-6 lead before self-destructing. OU guard Nyeshia Stevenson scored 21 of her 22 points during an eight-minute first-half stretch as the Sooners went on a 31-8 run to post a 37-24 lead at the break.

In the second half, KU outscored OU, 45-44, but never could close the gap to single digits.

In losing, the Jayhawks may have found a point guard to replace injured Angel Goodrich, who will undergo knee surgery Monday. Sade Morris, playing in her hometown, scored 15 of her team-high 17 points in the second half while operating almost exclusively at the point.

Kansas (11-7, 1-4) will entertain Colorado on Wednesday night before hitting the road again for a Saturday date at Missouri.

• KU senior forward Porscha Weddington made her season debut, scoring three points and grabbing two boards in four minutes of work. Weddington was out with mono.

• OU’s 81 points are the most the Jayhawks have surrendered in a game this season.

Tough question is whether the team is giving up on the coach?

Have patience, this team is better than last year, and way better than 5 years ago. With 7 top 25 teams in this conference, it is tuff to break into the top half. There are not nearly as many top women's players as men, and most are hoarded by UConn, Tenn, Stanford, Duke, UNC, top of Big 12, and top of Big 10. There is no parity in women's basketball and the rich get richer.

It isn't over. It's not even half way through conference. Plenty of time to regroup and make a run at the post season.

Yeah, right....in other news, the men's team is making a run for 5 straight conference crowns. Let's get our priorities straight. Nothing to see here.

Okjhok, the Men's team is going for their 6th straight.

Plus or minus five big twelve wins? Lynette Woodard campaign meeting following the Colorado loss at home. Good thing we can use the Lynette posters from the Mizzou game for our campaign.

I would love to see Woodard coaching on the sidelines as the head coach or an assistant coach, or involved in the women's program in any capacity.

At a game the only chants we should be chanting are chants of support and encouragement for the current lady Jayhawks.

It's difficult enough as it is winning games in the big 12 without people turning Allen into a hostile environment for the home team.