Kansas forward Marcus Morris hangs for a shot around Baylor center Ekpe Udoh during the second half, Wednesday, Jan. 20, 2010 at Allen Fieldhouse. At right is Kansas Center Cole Aldrich.

• Aldrich weighed down by family situation

Baylor gave the Jayhawks a run for their money Wednesday night at Allen Fieldhouse. 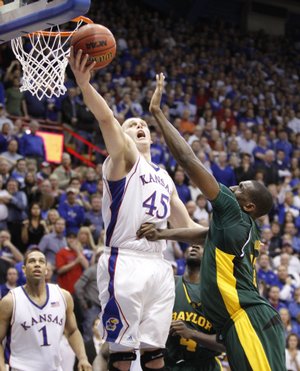 How would you grade KU's performance against Baylor's zone defense in the Jayhawks' victory Wednesday?

The Bears were nowhere to be found.

They’d raced through the southwest tunnel for some peace and quiet.

“I don’t think it was a slap in the face, but I thought it was disrespectful. You can’t come in somebody’s homecourt and disrespect them like that,” Collins, KU’s senior guard, said, adding, “I went to our huddle and said what they did was disrespectful. I said, ‘Let’s go. Let’s win.’’’

Collins took that perceived slight and used it as inspiration in exploding for a game-high 28 points off 9-of-16 shooting in the Jayhawks’ 81-75 victory. He hit five of nine threes and five of six free throws and dished four assists against no turnovers with two steals in 38 minutes.

“They would probably say it was too noisy and can’t hear,” Collins said of the Bears refusing to watch and listen to KU’s pregame video and stick around for KU players being introduced as starters.

Indeed, that was coach Scott Drew’s explanation, saying the Bears hit the hallway to talk about how they wanted to start the game.

“Every other team sits there,” Collins noted. “I’ve never seen that in my four years (here). If we weren’t ready before, by the time they did that, we were ready.”

KU coach Bill Self, who said the Jayhawks played “great” in persevering against Baylor’s tough 2-3 zone, was miffed at Baylor’s snub.

“We talked about that,” Self said. “That was highly unusual, highly. We would never do that. Maybe that’s their philosophy on how they handle things. I don’t know.”

Self discussed the matter with Drew in the postgame handshake line. Drew informed KU’s coach that Drew wanted some quiet time with his team before tipoff. That’s the same coach who could be heard barking orders to his own players while the Jayhawks were shooting free throws.

It all added some spice to a hard-fought battle that featured a wild one-on-one scoring battle between Collins and LaceDarius Dunn (27 points, 8-of-14 shooting, 5-of-8 threes).

Collins scored 21 points the second half and was nearly perfect in doing so. He hit six of seven shots, four of five threes and five of six free throws.

“He’s the best guard in the country, at least in our opinion,” Self said.

Collins admits he was thinking of his late great-grandfather, Robert, the entire contest, especially down the stretch. Collins, whose great-grandpa died Friday night, hit the baseline to bust a 67-67 tie, shortly after the Bears erased KU’s 10-point second-half lead. He also drilled a three at 1:10 and made one of two free throws at :54, upping a 71-69 lead to six points.

“He pushed me a lot. That’s what he always told me, ‘Keep pushing. Keep pushing,’’’ said Collins, who today will fly to Chicago for this afternoon’s memorial service. He’ll be back Friday to prepare for Saturday’s 1 p.m. battle at Iowa State.

“I hate going to funerals. I have to attend. It’s a close family member,” Collins said.

Collins, who has been coming up mighty big lately — remember his 33 versus Cornell and 22 at Tennessee and Nebraska? — said “yes” when asked if he should be in the discussion for national player-of-the-year honors.

“I didn’t come back to win national player of the year. I came back to win the national championship,” Collins said. “We’ve got to keep taking small steps, win the Big 12 first.”

“They shot a good percentage, but we also got 15 steals (including Xavier Henry’s seven thefts),” Self said.

Overall, “That was a great college basketball game,” the coach said.

And a great pregame video, he might have added.