KU’s Goodrich to miss remainder of season with torn ACL

Kansas guard Angel Goodrich goes down with a hurt knee injury Tuesday, Jan. 12, 2010 at Allen Fieldhouse. Oklahoma State outlasted the Jayhawks with a layup to win in the final seconds. 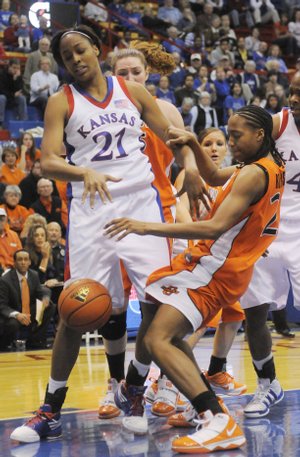 Angel Goodrich, a red-shirt freshman on the Kansas University women’s basketball team, will miss the remainder of the season after suffering a torn anterior cruciate ligament and meniscus damage in her right knee during Tuesday’s 70-68 loss to No. 15 Oklahoma State.

Goodrich, who missed the entire 2008-09 season after tearing her left ACL, left the game with just under 2:30 remaining in the second half after a collision with an Oklahoma State player and didn’t return.

Midway through the first half Tuesday, Goodrich had to be helped from the court and led into the locker room after a fall near the baseline appeared to aggravate the right knee, which coach Bonnie Henrickson said was tweaked during KU’s Dec. 30 victory over Pepperdine. She returned late in the first half.

Goodrich will have surgery this month and is expected to return next season as a sophomore. She was averaging 7.1 assists, 6.8 points and 2.7 rebounds.

If she is out for the year then Bonnie is toast. This is her year to make or break.

The concerns should be about Angel and her health. She worked hard to rehab the knee and that is not easy. Doing it a second time will be even more tedious. She is the engine that runs the team. Hopefully it is not a season ending injury.

The other lugnuts are coming off.....

Darn, without our Angel there will be no NCAA tourney. This season is looking like to Football season sequel. Pre-season top 25. Good early wins. Getting swept by Missery and K-State. Followed by a new coach! (Can somebody get Lynette Woodard on Line One for Lew Perkins please?)

Don't be in such a hurry. If Bonnie rallies the team, then she stays. Even an NIT run will keep her job. If KU does not qualify for either, then Lew is gonna have a tough decision. Goodrich may be back, and she may not, and even if she is, there is a good chance that she will not be the player she was. Monica Engelman is gonna have to step up and the other point guards in committee, otherwise it's sayonara baby.

How many years does Bonnie get? I'm willing to be at this point that even women's basketball has better facilities than most ... seeing as they are the same facilities. She seems like a hard worker and a nice woman, but it just hasn't worked at all. Hopefully she can rally this team and get them back on track.

arrrgh... poor Angel.. hopefully KU WB team is not in a worse shape now! get well soon, Angel because we love to see you back in action again. rock chalk!

Haven't heard of Coach Bonnie abusing players, athletic staff, or other campus employees, so the similarities to the dearly departed FB coach are minimal at best.

It will be tough to lose a player like Angel, but we just missed the dance and made nice NIT run last year without her. There is no reason we can't do as much again this year, tho the same people that said the sky is falling last year look to be making the same pathetic remarks.

All of you naysayers......were you at the game yesterday? The team played great. They pulled together after the injury. Let's focus on how disappointed Angel must be. And perhaps those of you who are continually critical could show up at a game and actually support the team.

Without Angel, it's Danielle and Sade against the World. We've learned the last few years that the World has a decided advantage.

Dear Angel, I'm so sorry. You've got the physical pain to deal with, but I imagine the emotional pain of having to sit out another year is as bad or worse. I know you'll be a real "cheerleader" for the team, and encouragement is like Vitamin C--crucial to killing all those negative "bugs". There should be an MVP award for those unable to play, because you'd certainly be up for that.

A really tough break for Angel and the Hawks. We might, however, pull together and make a run. Time will tell.

God, that's devastating! That poor woman needs a break. I'm not totally sure why she was playing after going out in the first half with what was obviously the same knee. Bonnie should be asked about that.

There is still a good core of players that can rally and win games. Honestly I think this is going to elevate McCray's game and might even put her in the drivers seat for POY. Watch for her scoring to rise. The ball will be in her hands a lot more.

Give the team a break, they lost one of their crucial parts with Angel going down and they also fought hard in that OK State Game. They will come back, and they will come back hard. The Coaches are doing a good job, the girls just have to step up and play....Coaches cannot do it for them. I am rooting for you all in the Big XII and on to the NCAA Tourney. Go JAYHAWKS!