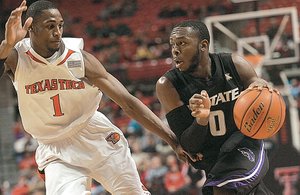 Lubbock, Texas — Jacob Pullen sees his Kansas State team operating on the road like a corporation.

It seems the approach is working as the sixth-ranked Wildcats have lost just one of seven conference games away from home.

“For us, we have to handle this as business,” Pullen said after scoring 21 of his 28 points in the first half to lead Kansas State to an 83-64 victory over Texas Tech on Tuesday night. “If you’re McDonald’s or Wendy’s, you don’t want Wendy’s selling more than McDonald’s if you’re McDonald’s. And so we have to make sure that we stay in front. So we handle stuff as a business, as a corporation for all our road trips.”

Kansas State (23-4, 10-3) won its sixth straight overall to remain alive for a possible tie for the Big 12 championship with No. 1 Kansas.

Wildcats coach Frank Martin said Pullen was psyched up before the game.

We need to end the drama before they come to town next week.

Burst their bubble on Saturday 'Hawks.

Pride goeth before the fall.

They realize they don't control their destiny, right?

KSU won't win the title... if they do... then I'll put my money on a lottery ticket and become rich.

Hey, these cats are good. They have a killer instinct that KU doesn't have. They generally put teams away better than KU. They play closer to a full 40 minutes of basketball. KU could learn something from KSU. It wouldn't surprise me at all if they won in Lawrence with the distraction of Senior Day and The Streak. KU could play tight and choke. Let's hope not.

Wouldn't it be something if KU played K State for the National Championship?

dicileboy, That would likely mean that we don't get a shot at Kentucky. While an all Big 12 title game would be sweet, I'd rather see us get a shot at the media darlings from Lexington.

A second championship over a Calipari "coached" team would be sweeter than just continuing our dominance over the lesser state school from out in the sticks.

We play K-State next Wednesday, we play Okie St. in Stilwater this Saturday.

Firebird ... I think that's what dagger meant. If we beat OSU on saturday, then KSU's quest for a piece of the title is ended.

As much as I hate to admit it, I'm scared that we may lose to K-State. As long as we win at OSU and wrap up the title then that will at least make a possible loss a little more bearable. With it being such a hard fought win at Kstate I think that it will again be a hard fought game. I hope that the Hawks can pull it out. We'll see.

Glad to see Jacob preparing for his career after basketball.

We better play UK soon because it looks like that this time next year, Calimari, Lebron, Wall and World Wide Wes will be in New Jersey!!

Gosh, that would be just an awesome chunk of Karmic Payback for the Kentucky fans!!

We crush their championship hopes with one fell swoop if we take care of our "business" on Saturday and clinch the championship... having the bubble bursting effect dagger refered to.

That said, K-State has a great squad and it will be a good game, if we don't let them drag us down into the unholy mess that I witnessed last night on TV. That was some sloppy ball in the first half.

What I like most about the next 14 games is that each has a lot riding on it: OSU to clinch, KState on Senior Night (rival, streak, Sherron's last game in AFH, etc), MIZ-FYL for 2000 wins (and rivalry), Big 12 Tourney for pride and intimidation of the 64, Madness for all the marbles! It's going to be a pleasure watching these 'Hawks make their way back to the top! Hope to see you all in Lawrence in a couple of weeks!

Golly Uncle Jed, dey is truble in duh out house!

I think you're right! If he stays at Kentucky with the team he has, he's dumber than dumb. He's losing too many to stay and few recruits coming. It's Memphis all over again. He knows there is no other program in NCAA that will have him. Knight's comments sealed Cal's fate!! He has no future at any other power b-ball D1 program and he knows it. Cal is exposed all over the collegiate b-ball world.

BTW- You haven't heard any uk fans on the kusports board lately either. They get real quiet when their barn begins to burn.

Crapalari can sell out previous recruits but he might actually have a concious with his own recruits thus limiting his opportunities to WWW/bribe as many for next year. Or maybe people are actually paying attention to the pundits...

KSU - As long as Martin isn't Pullen Clemente, we should fine. He's our teams best player.

"You want fries with dat?"

I agree that 2008 team got booted in Stillwater and this team has a eye on the NCAA. SO just take care and focus guys, win this thing .. RCJH

cklarock, im glad i wasnt the only one thinking that haha

I for one can't wait for Professor Pullen's analysis on Burger King (Texas?), Checkers (Missouri?) and Jack in the Box (Texas A&M?)...

cklarock, possibly a top ten post of all-time. Pullen is talking like they are the ones running away with the league title---"and so we have to make sure we stay in front." I can sum this article up in one sentence...Jacob Pullen is a reh-tard.

KU - I disagree, we may not put other teams away like they do, but we sure did put them away, in their house too!

marqjbm---I agree with you. Although, a Big 12 Final in the NC would be sweet, I really want Kentucky. The only way to shut them up is to beat them. Of course, someone like Syracuse might beat us to the punch.

cklarock---Sherron knows something about McDonald's coming from his high school in Chicago. He was a pudgy fat boy until the weight, strength and conditioning folks got a hold of him and molded the young man into what he is today.

I am with a lot of you above---take care of the Cowboys first. Then, I can breathe freely for a few days before Senior Night. This OSU game---man, I just don't know---have a bad feeling about it. If we play like we did at Texas, then, I have nothing to worry about, right?

The OSU game is huge worth almost 3 wins. Imagine if we stumble in Okie land, then SKate gets hope, and Columbia goes nuts.

We win in stillwater and solidy our place on the top, then a little air comes out of the hopes and dreams of cats purple, black & gold. As then they could not force us to share the crowm.

Take care of biz at OSU.