Kansas’ Carolyn Davis, left, gets tangled up with Colorado’s Brittany Spears during the first half. Davis was 10-for-10 from the field and scored 28 points as KU won, 79-72, on Tuesday in Boulder, Colo. 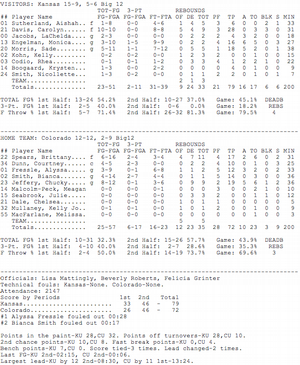 Davis, a 6-foot-3 freshman forward from Houston, went 10-for-10 from the field and 8-for-8 from the free-throw line, good for a game-high 28 points in the Jayhawks’ 79-72 women’s basketball victory over Colorado.

Davis, who barely missed her career-high of 29 points, grabbed nine rebounds and blocked three shots. The only blemish on her stat line? Three turnovers in 31 minutes.

Davis, who tied the Big 12 Conference record for field-goal percentage in a game, was clutch at the line late. She iced two free throws that gave KU a five-point advantage with just :25 remaining.

Colorado, which was led by guard Chucky Jeffery (19 points), had five players score in double figures.

The Buffs, who trailed the entire second half, pulled within three points with 4:42 left. With both teams in the double bonus, it became a battle at the line. KU hit 15-of-18 free throws in the last four minutes including six straight in the last 18 seconds.

Congrats on the win girls! Now take down Texas Tech!

Next game is HUGE!

Texas Tech is the last Big 12 Team in (9th in the Big 12 Standings)... a win here would go a long ways in capturing the bid for the Big Dance!

Awesome performance by Carolyn! It's good to see that she and Monica have been so consistently productive recently. The team is performing fantastically under the circumstances they've encountered, and some real go-to players have emerged.

That's a line I'd like to read from here on out. We need a consistent third scoring option in order to prevent teams from game planning around Engelman and Davis.

No diss to the 'Smooth Operator' intended. Keep it up, Sade.

Still, there's a lot of glue on this team...lot's of contribution being spread around.

Absolutely cracks me up that the CU women's team has two players named Brittany Spears and Whitney Houston. Who's next? I hear Taylor Swift has eligibility left, and what is she, 19 or 20?

"No diss to the 'Smooth Operator' intended."

Correct. Just pointing out that I'd like a third option. Not that that player isn't producing.

Is what I'd like to read inaddition to the stats we read with Engelman and Davis.

That way teams have to game plan for three plus girls, instead of two.

Welcome back Sade, now we have a dynamic trio that can take the team far this season and beyond into next season. Congratulations!!!

Congratulations: Sade, Carolyn, Monica. Now to TTec and beyond, We are on the groove.