The Kansas women's basketball team came up just short against a ranked opponent on Saturday, falling to Texas in double-overtime. 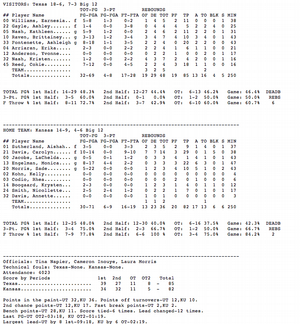 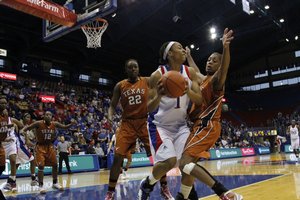 Forget, for a moment, that the Kansas University women’s basketball team’s bid to upset No. 14 Texas fell short in double overtime on Saturday.

Or that the 85-82 loss marked the Jayhawks’ second straight inside Allen Fieldhouse, where the team began the season 11-1.

On Saturday afternoon against the Longhorns — a day in which usually efficient KU senior Sade Morris shot just 5-of-22 from the field — a pair of Kansas freshmen showed why the future of the program has the potential to be mighty fruitful.

Forward Carolyn Davis and guard Monica Engelman, neither of whom had started a collegiate game as recently as three weeks ago, combined to score 51 points and were the primary reason the Jayhawks, playing without arguably their top two players, were able to overcome a five-point halftime deficit and take one of the conference’s top teams to two overtimes.

“They’re playing with a lot of confidence, and they’re playing with a tremendous amount of emotional maturity,” said KU coach Bonnie Henrickson, whose team has carried on surprisingly well in the wake of season-ending injuries to All-American wing Danielle McCray and standout point guard Angel Goodrich. “That’s not to say they don’t make mistakes — they do. But they don’t let one mistake turn into two or three mistakes. They’re able to bounce back, and they’ve showed resiliency, which is difficult for young kids to do, especially in this league.”

Davis was easily the best player on the court against Texas, finishing with game-highs in points (29), rebounds (14) and blocks (five), and Engelman wasn’t far behind. The San Antonio native built on a dominant first half (14 points on 5-of-7 shooting) by hitting a pair of big shots late in the game, including a long three-pointer with 14.6 seconds remaining in the second half to force the first overtime.

“I knew I was going to be a contributor, but I never expected for Danielle to be hurt,” Engelman said of her recent emergence as a top scoring option. “I always knew that I had to come to practice every day and be ready for anything ... and this is just how the situation turned out to be.”

In the end, though, their combined efforts Saturday weren’t quite enough.

Kansas’ other three starters combined to shoot just 8-of-32 from the field, and the Jayhawks failed to protect a four-point lead with 24 seconds remaining in the first overtime, as Texas guard Ashleigh Fontenette hit a game-tying three-pointer with one second left to force a second overtime.

“We have to look at this game and find all the mistakes we made and just correct them,” Davis said. “We didn’t make a lot of big mistakes, but the little mistakes are what’s hurting us right now, and that’s what we’ve got to clean up.”

Still, if the next three years go anything like Saturday’s game did for the Jayhawks’ freshman duo, fans of the program will have plenty to which to look forward.

“I haven’t had that many emotions running through my head in a long, long time,” said Engelman, who finished with a career-high 22 points and added six assists. “It’s almost driving me crazy. You don’t know if you should be excited or what, so you’ve just got to keep playing basketball.”

It was a hard fought effort... we just stood up to 2 ranked teams... and pushed them to the wire... this team is getting better... we just happened to play those two at the wrong time...

Great effort Girls... go chow down on some Buffalo on Tuesday!

Every KU fan should be proud of how the Hawks played today. They fought so hard and came so close. This team never backs down. And Monica and Carolyn were amazing. This team is stepping up in the wake of losing their best player and their star point guard in a way no one expected. Texas was stronger, more experienced and just plain better but the team never folded. Keep fighting Hawks!

@AIRONA10 - I couldn't have said it better myself.

double ot... i guess a lot of people got towed.

As I said a couple of nights ago and this morning. This was another awesome game.

The girl's are living up to my expectations. It won't be long before they start winning the close ones...

@chuckberry32 - The game was over well before 4 p.m., so unless you really took your time leaving the Fieldhouse, you were fine.

Imagine what they could do with a coach!

imagine if the refs knew that an elbow was a foul...we win and people like you get of Bonnie's back

supermario - You are right, some of the calls did not go in our favor at the end of the game. The one ref called a jump ball when Sutherland clearly had possession and tossed it to a team member. That was an awful call. There was also a bad call against Morris when she took the elbow. Who knows what could have happened. Would have loved to of seen the ball in Monica's hands with ten seconds to go. Jacobs just kinda freaked out. Anyway, hard fought game, good atmosphere. The freshman and soph's we have next year are going to be decent. Davis and Engelman will just continue to grow. I hope Goodrich finds her way back. That'd be a pretty quick team.

SORRY I AM NOT A KSU/MU fan so I don't blame it on the refs. We were at home shouldn't have been able to be decided by the refs anyway. Bonnie has NOT built this program quit making excuses.

Glad that Monica and Carolyn have stepped up in the absence of Angel and Danielle.

What really annoyed me was during Double OT when we had the final possession... why didn't Bonnie sub in our sharpshooters? We had nobody out there, aside from Engelman that could really make 3's in clutch shots. We needed Smith and Boogard out there.

Imagine that, onlyonethought thinks it is Bonnie's fault. Guess she must not have been the one who recruited Davis and Engelman, or the one who game planned around losing our starting PG, or the one who kept the team together after losing our leading scorer, to the point that we beat K-State and took the #3 team to the wire and the #14 team to double OT.

Set aside your irrational hate for one second and see that this team is responding tremendously well to incredible adversity, and acknowledge maybe, just maybe, the coaching staff has something to do with that.

If you can't do that, then you might as well be a KSU or MU fan, because you're harder on this team than they ever are.

Were you at the game OnlyoneUinKansas? The rest of us are tired of your negativity. Go watch the Wildcats.....both of their coaches are skilled at whining. You'll fit in well there.

phog- OnlyoneUinKansas obviously hasn't done any research on Bonnie, and obviously doesn't know anything about about building a program. Bonnie has done a wonderful job.

OnlyoneUinKansas - I like your name but seriously if you are a hawk fan, you need to show some class. Our women's program obviously is not as rich in tradition as our men's program. Bonnie is doing a great job of recruiting as of the past couple years, and finally we have something to look forward to and get excited about when in comes to the women. If our freshman duo is scoring 50 pts. a game, what do you think they'll do with 2 years of experience and strength conditioning? I'm not hatin' on you or saying you aren't a good person. It would be nice if you could represent the Hawks in a littler neater fashion.

It's obvious that there are several people who post comments on this site that haven't a clue as to how basketball works.

Hard to believe since this is the birth place of basketball...