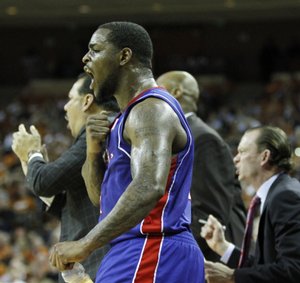 That action cost Aldrich a technical foul, since the contact came after the whistle had blown.

“I got the rebound, turned to outlet and accidentally hit him,” Aldrich said. “I tried to apologize. There was no intention at all.”

James smacked at Aldrich’s hand as KU’s big man tried to apologize. The two talked about the play calmly in the handshake line after the game.

“I apologized. I said, ‘I didn’t mean to hit you,’’’ Aldrich said. “He knows I didn’t do it intentionally. He accepted my apology.”

KU coach Bill Self said the ref made the correct call since Aldrich’s contact came after the whistle.

Aldrich’s technical foul caused him to foul out, leading to one of the wackiest plays of this or any season.

The ball slipped out of Morningstar’s hands, and he horsed up a jump shot from the line, which had no chance of going in.

“My sub was smart. That’ll be an ESPN Not Top 10 for the next six months,” Self said with a laugh. “He said the ball was wet, and it slipped out of his hands.”

“The ball was wet. It slipped on the way up. I was so confused. I could have caught it and came down with it, but I’d have stepped on the line. I tried to shoot a little jump shot so I didn’t cross the line,” Morningstar said.

“I looked pretty stupid there,” he added. “We laughed about it in the locker room just now.”

Self has a chance to claim his 400th victory as a head coach Saturday when the Jayhawks meet Iowa State in a 7 p.m. tipoff in Allen Fieldhouse. He’s 399-146 overall in 17 seasons.

“It means we’ve had good players and assistant coaches,” Self said.

Sherron Collins moved up a spot to No. 10 on the KU career scoring list. He had 15 points and has 1,704 for his career becoming the 10th player in KU history to score 1,700 points. Collins has scored in double figures in 10 of the last 13 games. ... Aldrich recorded six blocks, one shy of his season high, to move up to No. 4 on the KU career blocked shots list with 218 career rejections along with Scot Pollard (1994-97). He fouled out for the first time in his career. ... KU won its third straight against Texas and is 17-6 versus UT all-time. ... The win marked Kansas' first win in Austin since Feb. 11, 2002, snapping a three-game skid at the Erwin Center. ...KU converted 17 Longhorn turnovers into 27 points, its most points off turnovers in Big 12 play this season. ... The Jayhawks held Texas to 37.3 percent shooting. KU has held 18 of 24 opponents to under 40 percent shooting. ... UT’s 24 points in the first half were the second-fewest points scored by a KU opponent during conference play this season. Texas Tech had 18 points in the first half on Jan. 16. ... Marcus Morris has shot 50 percent or better in four of his last six games. ... Collins tied a career high with four steals and dished five assists and has 16 dimes in the last three games. ... Markieff Morris pulled down nine rebounds to lead KU for just the second time this season. He also had three blocked shots for the second straight game, one shy of his career high.

I am confused....What did Cole get the tech for? Elbows or pat on head! When the whistle blew? That play was bogus...no matter how you look at it!

kusayzone... I agree, he was already making that move by the time the whistle blew for James practically begging for a piggy back ride, for him to stop doing that would have taken anticipation of the whistle, and flash-like reaction time. That they got to go back and look at a monitor to give him a technical after the fact feels a bit like cheating.

Also worth noting. Sherron just became the 10th player in Kansas history to score over 1700 points. I remember from the broadcast against Nebraska seeing that Ryan Anderson got over 1000 career points either against us or in the previous game, becoming just the THIRD NU basketball player to get over 1000 points. KU has had at least 10 players just this decade to get over 1000 points, and Cole has a chance to get there before the end of the season. How blessed we are!

Bill Self is misquoted in this article.

“My sub was smart. That’ll be an ESPN [NOT] top 10 for the next six months,” Self said with a laugh. “He said the ball was wet, and it slipped out of his hands.”

Since ESPN has a blooper version of their top 10 plays, called the "Not Top 10" from time to time, Bill's quote makes a lot more sense when quoted correctly.

Cole had to get a T for that play. You can swing the ball, but his elbow was at the level of his own head, which is way too high. I don't think he meant to hit James, but at the same time, he was frustrated with the play and the hard foul he just received. So I think the move was intentional, but he never really wanted to hit anyone.
As for BrianBrandesTulsa, I don't know how you can call Damion James a joke! He ended with 24 points and 10 rebounds! He is a player that stayed all 4 years and it shows. You don't have to like Teas, but appreciate a good player when it is deserved.

That second half of basketball was worse than the second half against screw mizzou. There wasn't a minute that went by that foul's weren't being called, bad passes made, and just all around poor judgement. When KU went up big, the first thing I thought of is whether or not we could play a complete 40 minutes. I'm impressed with the win and don't want to take anything away from that, but we have lots of areas to still improve upon.

d_prowess is right about the tech being called. Cole knew what he was doing and if you don't think so, look at what he says and his body language after the play.

Am I the only one who noticed that TT had some issues last night? TT turned the ball over on a horrible pass midway through the second half, it was stolen by UT, and he returned to defense to foul a 3 point shot. That not only extended the game, but Brown sank all three. When HCBS pulled TT during the last free throw, he put his hands up, and looked to have a bad attitude. I really don't know what to think of TT at times. He rode the pine for a while after that, but I was disappointed to see him back in the game. I'll always trust HCBS, I just don't like TT's attitude at times.

Congratulations on the win in the Erwin Center HCBS. You are the perfect fit at KU.

As a ref myself, you hate to make a call like that, but it is the rule. Tough break that it was #5, but the refs got together with the coaches and got it right. Cole did the classy thing and apologized and James knows it wasn't intentional, just wrong place at the wrong time in an agressively played game.

Most impressive fact among all of this was finding out that this was the first collegiate game that Aldrich has fouled out of. Given the typically aggressive way he plays defense, that is astounding.

Kustrong, admit it, you just don't like Taylor, period.

ginger2015, I think it has more to do with expectations of TT after what I read through out the entire summer.

At the same time he might be experiencing a sophmore slump and that might be causing him a great amount of frustration. As a high school soccer and baseball coach I get to deal with this all the time. In which case, I trust HCBS.

It was a great game to attend. KU had a strong showing in the crowd and the "Let's Go Jayhawks" was really loud. I thought the Texas crowd was respectful of KU and polite. How was the broadcast?

It was funny, no doubt. Did everyone see Bill Self after Brady shot the FT? That got me laughing!!!! Man, that was the look, "Like I'm going to ring your neck!!!!"

TT has been terrible. I loved that big three he busted from the corner in the second half but he needs to get his dribble drive under control. I too think the expectations for him have not been met coming off of this summer but I think a lot of it has to do with Collins running the show. Of course CBB is more than a U19 tourney against some sissy Europeans its a mans game!!! Now I wanna see TT become a man and start playing like one not an undersized eighth grader getting poned by the big kid in the paint!