Kansas University’s Kelly Kohn, foreground left, and Carolyn Davis celebrate with the rest of the bench in this Feb. 7, 2010, file photo. The KU women will participate in their "Think Pink" game on Saturday against Missouri. 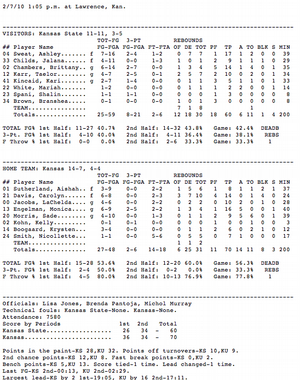 The Lady Jayhawks were back in action at the Fieldhouse Sunday against rival Kansas State. Kansas won the contest, even without Danielle McCray, whose career ended with a torn ACL in practice. 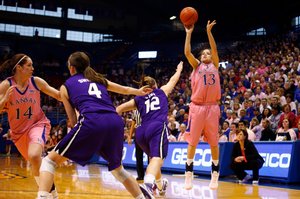 KU’s Krysten Boogaard (14) heads for the boards as teammate Monica Engelman (13) puts up a shot. Engelman had a team-high 16 points against K-State.

For the first time since arriving at Kansas University, Danielle McCray didn’t come to play.

“I shed some tears before the game,” McCray said. “I knew I would, but I kept strong during the game.”

So did her KU women’s basketball teammates.

It was only the second victory for Kansas over its Sunflower State rival in the last 19 meetings.

McCray tore the anterior cruciate ligament in her left knee during Thursday’s practice session, ending her college career and leaving her in fourth place on the school’s all-time scoring chart.

“I talked to her late last night,” KU coach Bonnie Henrickson said, “and I thought she was a little sad.”

Minutes later, she called McCray again and challenged her to come to the game, don a uniform and sit on the bench.

“I told her I knew it would be hard,” Henrickson said, “but I asked her to do one thing: ‘When your teammates look at you,’ I told her, ‘I want them to see strength and confidence.’”

That she did, although at times McCray acted more like a cheerleader than an assistant coach while sitting among Henrickson’s coaching cadre and occasionally scribbling a note.

“It wasn’t fun to sit on the bench,” she said, “but it was exciting to see what happened.”

The Jayhawks came out like gangbusters, forging a lead of as many as 16 points before settling for a 36-26 halftime lead. Those 36 points, incidentally, were one more than the Jayhawks’ total output in an early-January loss to the Wildcats in Manhattan.

K-State made a run in the second half, closing within five, but the Jayhawks clinched it by making nine of 11 free throws in the last minute and a half.

“I was a little bit nervous,” Engelman said about her first start, “but I owed it to (McCray) to go out and be aggressive.”

But it wasn’t all Engelman. Carolyn Davis, another freshman, had a double-double with 14 points and 10 boards, and LaChelda Jacobs chipped in with a season-high 10 points.

Seven KU players scored six or more points. Kansas had 22 points off the bench, while K-State, with only eight healthy players, counted 10 points from its reserves.

“People with breast cancer have had to fight,” Morris said, “but we had our fight, too, because it’s kind of been a struggle for us.”

KU officials pegged the crowd at a season-high 7,580.

“Everybody contributed … everybody,” Henrickson said, “and the crowd was better than we were.”

In winning its third straight, Kansas evened its Big 12 record at 4-4, but six of the Jayhawks’ remaining eight league games are against ranked teams, starting with unbeaten Nebraska here Wednesday night.

Great win! Way to hang in there and not give up. Keep up the good work.

Great game!!!! The Hawks looked great today. Very balanced and everybody chipped in. The team fought hard. Nice way to win it for Danielle and Angel!

NU is flat out good and Bonnie sucks against Yori(I guess anyone in the Big 12 honestly.......) but who knows we are playing with house money....

I'm really hoping that the Nebraska game on Wednesday will end up being like the Baylor game of last year. Taking down a Top 5 team by approximately 30 points. Hey, who knows... it could happen again.

Great win, Jayhawks! We saw a glimpse of the future today - earlier than we'd wanted - but it looks bright. Replacing McCray and Goodrich will take everyone stepping up, and that's exactly what happened.

(And leave it to onlyoneUinKansas to turn a story about KU beating K-State - without two of our starters, no less - into yet another opportunity to let us know he/she thinks "Bonnie sucks".)

Agree with Phillbert, This game is just a glimpse of the future of KU womens basketball. Give the young ladies credit, they are playing through so much adversity and injuries. This group, combined with next years recruiting class will be able to challenge any team. The Big XII is a tough conference to play in, and on any night, any team can come out victorious. I am just glad it was us (KU). By the way, Engelman and Davis were outstanding.

actually, it's a very gutsy, great win. Clearly out"manned" without our best player, the lady Jayhawkers pull out the win against our chief nemesis.

congrats to Bonnie and her staff....this season still may be salvageable. after getting blown out earlier in the year vs. the kitties, i had written Bonnie off....but she said "hold the phone!"

The Lady Jayhawks were terrific today. Carolyn and Monica are the faces of the future. Aishah defended Sweat perfectly. The Wildcats whined and cried and were helped by some terrible officiating. Despite it all, the girls never lost their composure. And what about LaChelda? You go girl! Let's fill the fieldhouse on Wednesday night.

haha i like how danielle was coaching. i think it worked:)

congrats to Bonnie and her staff....this season still may be salvageable. after getting blown out earlier in the year vs. the kitties, i had written Bonnie off....but she said "hold the phone!" "

She didn't say "Hold the phone." You're just now catching on on how the game is played. Sound like you still got a ways to go.

Here's a lesson for you.

Basketball is a chess game.

As long as you have pieces on the board, and know how to move those pieces correctly, then you have a chance to win every game.

After that tough first outing in Manhattan, and without Danielle and Angel, you ladies were awesome!

changes are good, sometimes. the unthinkable will become unbelievable. keep up the good work, gals. keep believing in yourselves and give it all you've got like those games are your final ones.