A Delta plane is seen at Newark Liberty International Airport during a snow storm Dec. 26, 2010, in Newark, N.J. Airlines are working to rebook stranded passengers and possibly add flights after a winter storm on the East Coast caused thousands of flight cancellations and left countless passengers stranded. Kansas University's Tyshawn Taylor was among the Jersey travelers snowbound Sunday. 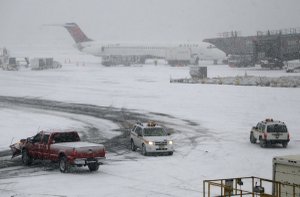 A Delta plane is seen at Newark Liberty International Airport during a snow storm Dec. 26, 2010, in Newark, N.J. Airlines are working to rebook stranded passengers and possibly add flights after a winter storm on the East Coast caused thousands of flight cancellations and left countless passengers stranded. Kansas University's Tyshawn Taylor was among the Jersey travelers snowbound Sunday.

Tyshawn Taylor remained stranded in New Jersey for another day on Monday. Snow shut down the Newark, N.J., airport.

KU coach Bill Self said Taylor would be able to fly out at about 8 a.m. on Tuesday, in time for a pair of practices on Tuesday.

A massive snowstorm that slammed into the East Coast on Sunday has delayed one Kansas University basketball player’s return from three-day Christmas vacation.

“Tyshawn could not get out today. All the flights were canceled,” KU coach Bill Self said Sunday night, referring to Hoboken, N.J., junior guard Tyshawn Taylor.

“Hopefully he can get out tomorrow. It’s snowing so hard they don’t even know if they can drive to the airport,” Self added of Taylor, stuck in Jersey because of a blizzard that’s expected to dump up to 20 inches in New York/New Jersey by this morning.

Five other Jayhawks from the East were able to flee the wintry weather in time for Sunday night’s practice in Allen Fieldhouse.

Twins Marcus and Markieff Morris flew out of Philadelphia early Sunday, as did Josh Selby from Baltimore and Thomas Robinson from Washington, D.C.

And freshman walk-on Niko Roberts, who hails from Huntington, N.Y., boarded a flight just before snow began piling up and the wind began gusting up to 50 mph.

“If Norm (Roberts, former KU assistant) had gotten Niko to the airport 35 to 40 minutes later, he (Niko) wouldn’t have been able to take off,” Self said. “Some of the guys were fortunate enough to have early-morning flights.

The snowstorm in Philly forced the NFL to move the Vikings at Eagles game from Sunday night until Tuesday.

Self, who celebrated Christmas in Oklahoma with his wife and two children, had no problems making the round-trip drive to the Sooner State.

The Midwesterner knows all about havoc that’s caused by snow.

“It’s circumstances you are unable to control. You can’t control Mother Nature,” Self said. “The biggest thing is (that) Tyshawn gets back safely.”

As far as KU’s first practice since the Cal game, Self said: “It’s just what you’d think it would be. The attitude was great, but we definitely need to run off some turkey and dressing.”

The Jayhawks, who headed to their hometowns after a 78-63 victory over California on Wednesday night in Berkeley, will meet Texas-Arlington at 8 p.m. Wednesday in Allen Fieldhouse.

Self said that, at this time, Little remains suspended from playing in games.

“He’s practicing with us. I had him take some time off. He did that, went home to Chicago to spend a few extra days with family,” Self said, adding, “He’s still part of the team. I don’t have any game plan (as far as if/when Little will play in games) as of now.”

Miami of Ohio of the Mid-American Conference is off to a 5-7 start entering Thursday’s game at Belmont. The Redhawks have defeated Xavier, Towson, IUPUI, Saginaw Valley State and Troy and lost to Duke, Ohio State, Dayton, Cincinnati, Green Bay, San Diego State and Wright State.

KU will conclude the nonconference schedule on Jan. 9 at (10-2) Michigan.