Many positions have been set, but who's going to start as quarterback is still up in the air. 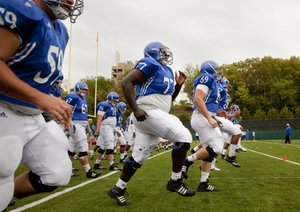 The departure of Thomas, along with the loss of true freshman linebacker Ed Fink, whom Gill announced Tuesday was out for the season, leaves the Jayhawks pretty thin at linebacker. Last week, KU learned that sophomore starter Huldon Tharp also would be out for the season with a foot injury, and outside of projected starters Drew Dudley, Steven Johnson and Justin Springer, the Jayhawks have very little experience at the position.

Gill said Steve Mestan, 6-foot-2, 231 pounds, from Delavan, Wis., had impressed him recently and most likely worked his way into the top four or five at the position.

A pair of walk-ons received great news this week, as Gill announced that offensive lineman Alex Smith and wide receiver Reece Petty earned scholarships for the 2010 season. Gill said a number of factors went into the decision to award Smith and Petty the scholarships. At the top of the list were strong work ethic, outstanding academics and the fact that, as seniors, they’ve shown tremendous loyalty.

“We’re happy for them,” Gill said. “I know our players were pretty excited when I made the announcement. And, obviously they were excited, too. I know their parents are somewhat excited also.”

The battle to become the successor to Todd Reesing appears to be as close as ever, with sophomore Kale Pick and red-shirt freshman Jordan Webb battling toe-to-toe into the third week of preseason practice. Gill reiterated Tuesday that there was no timetable for a decision and said he and offensive coordinator Chuck Long would pick a starter when one separated himself from the other.

“Chuck and I believe that both of these guys can move our football team,” Gill said. “We do feel good that Pick and Webb are guys who can play Div. I football and who can help us win. Obviously, the only question we don’t have (answered) is how they’re going to respond in a game. But you have to give them an opportunity to do that, just like in life. Either way it goes, we’re going to have two good quarterbacks on our football team. Whichever way we decide, we feel like we’re going to be in good shape.”

Gill had some high praise for cornerbacks Greg Brown and Isiah Barfield, tight end Tim Biere and defensive end Tyrone Sellers on Tuesday, saying that all four have shown great production and leadership during recent practices.

Brown and Barfield are vying for playing time in a crowded defensive backfield. Biere seems to be locked in as the starting tight end — one who could have a monster year — and Sellers, according to Gill, is competing with Kevin Young for playing time at the defensive end spot opposite of senior Jake Laptad.

I love football nuggets :) Thanks LJW for the best pre-season football coverage I can remember. I appreciate the balanced commitment to football and basketball being displayed.

What happened to Q. Woods opposite Laptad?

If Q Woods hasn't gained any strength and explosion since last season, it's no wonder he is being overtaken on the depth chart. He was way over-sold as a juco plug-and-play guy last year. He was way out of his league in terms of strength and violence.

Quinten Woods is sort of smallish for a DE anyway. I wonder if he has the speed to step in at LB since it's pretty shallow there right now. Maybe a scenery change would help the kid.

I'm telling you. Gill needs to move one or two of these lightweight DEs to LB spots. We have way too many undersized DEs, and way too few LBs.

Good point. I'm starting to lean that way too.

The mental processing of a linebacker is much more intense than a DE. It takes years of reads to become a quality linebacker.

Pick has had one extra year of practice over Webb yet Webb is keeping this battle neck and neck. Pick may start the season but I think at some point Webb is going to be the guy.

I hope you are wrong in that whoever we choose needs to play well. If we switch it will be due to injury or lack of production.

"Obviously, the only question we don’t have (answered) is how they’re going to respond in a game. But you have to give them an opportunity to do that, just like in life."

Does anybody else read into this statement?

Yep, that was my first thought.

I think both players are good enough to play and if given a good opportunity they'll probably give each of them a chance in a real game situation.

I do think that the coaches would like to name an official starter, but when it comes down to it you have limited information to truly evaluate these guys. Pick killed in the Spring game, so the assumption has been that he'll get the nod; however, I get the feeling that Webb has outperformed him on the practice field.

Webb did put up ridiculous numbers in high school, so it would be hard to justify having that much talent ride the pine behind Pick.

Sounded to me like they may play both of them during the first game. How else are they going to answer Coach Gill's question? He wants to see them "respond in a game.".

Scary thought considering what the team went through before Reesing solidified the situation.

I we don't get to the second unit against NDSU, we are in trouble anyway, so I would definitely expect to see both play. Whether both play with the #1's is another question for another day.