Night of honors: Bonds, Reesing among those who received awards

Kansas University athletic director Lew Perkins, right, hugs football player Darrell Stuckey after he was recognized as one of the Senior Athletes of the Year on Monday at the Jayhawk Senior and Scholar Athlete Banquet at Allen Fieldhouse. Also on stage are, from left, baseball player Robby Price, basketball player Danielle McCray and football player Brad Thorson, accepting for Kerry Meier.

For the first time in the history of the Jayhawk Senior and Scholar Athlete Banquet, the ceremony took place at the heart of the Kansas University campus Monday night. 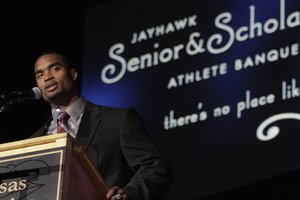 In front nearly 1,000 people seated on the floor of an elegant and made-over Allen Fieldhouse, scores of KU student-athletes were honored during an event themed, “There’s no place like home.”

“Our senior scholar athlete banquet is the best event we have at the University of Kansas,” KU athletics director Lew Perkins told the crowd Monday. “I’m so proud of all of you.”

Highlighting the night was senior cross country and track and field athlete Lauren Bonds, who presented one award and accepted three more, including the Best-Actress-esque Robert Frederick Female Scholar Athlete of the Year Award. The award is named for the late KU athletic director who died last June after a cycling accident, and, this year, a short video honoring Frederick’s life accompanied the presentation.

Bonds, who also shared the Prentice Gautt Big 12 Postgraduate Scholarship Award with cross country and track athlete Eric Fattig, holds four school records and a 3.93 cumulative grade-point average. Former KU quarterback Todd Reesing, who is preparing for a professional football career and was not present, was named the Male Scholar Athlete of the Year. Accepting the award on Reesing’s behalf was his father, Steve Reesing.

“It is definitely a huge honor, especially since we have such an impressive class,” Bonds said. “A lot of these seniors are going to the NFL and the WNBA, so it is really an honor to be selected with so many other strong candidates.”

In addition to the student-athletes being honored, several behind-the-scenes contributors were recognized for their assistance. Women’s basketball player Kelly Kohn sent out special thanks to the tutors and academic advisors; sociology professor Sandra Albrecht was presented with the Del Shankel Teaching Excellence Award; and Perkins presented the Lifetime Service Award to men’s basketball administrative assistant Joanie Stephens.

“Kansas Athletics is my family,” an overwhelmed Stephens told the crowd. “And I am thrilled beyond belief. All I can say is, thank you with all my heart.”

A big tip of the hat to these impressive young people. You do us all proud. RCJH

Congrats to all! You are the epitome of what it means to be student-athletes!

I mean they are so rare, it's just so refreshing that they are reconized and honored not only by the school but the local media.

Was Collins in attendance?