Stuckey scooped up by San Diego in Rd. 4

One of the first people that former Kansas University safety Darrell Stuckey spoke with after being selected by the San Diego Chargers with the 12th pick in the fourth round (110 overall) of Saturday’s NFL Draft was San Diego secondary coach Steven Wilks.

Shortly after the introductions, the Chargers assistant had one question for his newest pupil. 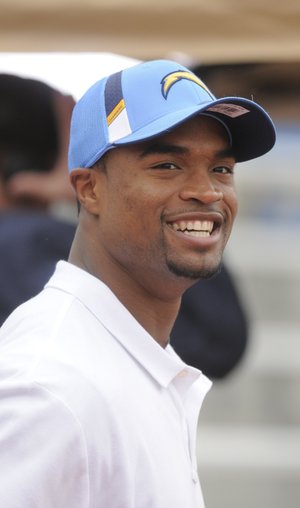 Newly drafted San Diego Charger Darrell Stuckey smiles on the sidelines as he watches during the second half of the Spring Game Saturday, April 24, 2010 at Memorial Stadium.

Although he had hoped to be drafted on Friday, when rounds two and three took place, Stuckey was thrilled to go early in the fourth as the ninth safety taken. When his name was read over the speakers at Radio City Music Hall in New York City, it was just after 9:45 a.m. central daylight time. Shortly thereafter he grabbed a Chargers hat he received from the team at the combine.

“It feels good,” he said. “It’s just like going through a six-month process for a job interview. I talked to the secondary coach already, and he said if I go out there and battle and bust my butt and work hard, I could easily find my way onto the field.”

Another person within the organization that Stuckey spoke with was former KU teammate James Holt, a San Diego linebacker.

“I asked him about the cost of living,” Stuckey said before breaking out into laughter. “Nah, he said it’s a beautiful place, I’ve heard nothing but great things about it. It’s a great place to play, it’s a great environment and they have a great organization. I’ve personally never been in California. The first time I was on the beach was at the Orange Bowl.”

Stuckey leaves Kansas as one of the most accomplished defensive backs in recent memory. He played in 45 games in four years, starting every game from his sophomore season on, and finished with 295 tackles. In addition, he grabbed eight interceptions, made 11 tackles for loss and was a captain in 2009. In 2008, Stuckey was KU’s lone all-Big 12 first-team selection.

“I knew I was a fourth-round gem, and I want to be (with San Diego) for a long time,” Stuckey said. “They told me on the phone that they were surprised I was still there in the fourth round, and I said, ‘We’ve got something in common.’”

Solid pickup for the Chargers, at least from a special teams and backup standpoint.

Very true! But if you look at the Chargers S position, he could become a starter his rookie year. And I'm with truefan, the Chargers are now my favorite team!

I'm getting his jersey...seriously. That guy is awesome. Chargers fans are complaining because they don't know how big of a steal they just got in the 5th round. He'll get plenty of pt with his great character and work ethic.

Congrats and good luck to Darrell. Will always be one of my favorite KU players.

The Chargers just became my new favorite NFL team. Screw the Cheifs, they only pick up MU players.

Seriously? Because they have drafted 2 Tigers in the past 25 years...

Actually they have drafted 3 in the last 25 (Ernest Blackwell, Will Franklin, Colin Brown) 2 of which were picked up in the last 3 years. They haven't drafted a KU player sice 1997 when they snagged June Henley and Isaac Byrd.

As far as Doug Terry, he was not drafted by the Chiefs, he was picked up in a trade deal and only started 10 games.

I'm just tired of sharing teams with the state of Missouri. It may say Kansas City on the jersey, but there are plenty of Mizzou fans in the seats and they are just as classless at those games as they are at their own games.

I think Darrell has the best chance of making an NFL roster. How did the Chiefs get on MNF? I thought they tried to schedule good teams. (sorry Chiefs fans)

MNF at 9:15 CDT...horrible. the game won't end at least 30 minutes past midnight....how many school kids will be able to watch that game?

congrats to Darrell. excellent combine, and he's really put in the work. he's a good mix, because he can play special teams too. Should be a good fit. i'm really rooting for you Darell Stuckey!

Good luck, Darrell!. Thanks for all your hard work. Glad it has paid off. Keep it up and make us proud.