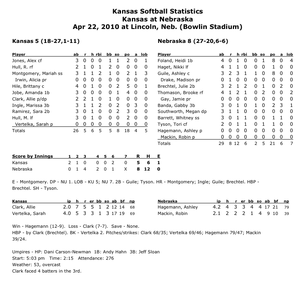 Lincoln, Neb. — Despite home runs from freshman Mariah Montgomery and sophomore Marissa Ingle, the Kansas University softball team could not hold on to its lead, and Nebraska defeated the Jayhawks, 8-5, on Thursday.

Kansas led 3-0, but Nebraska scored a run in the bottom of the second inning before putting up four more runs in the third frame.

“After being shut out in the first game versus Nebraska (last week), coming out and scoring three runs right away was a great start,” KU coach Megan Smith said. “But despite our good start, Nebraska was able to make some good offensive plays. But we fought until the end and never gave up.”

rough year. 1-11 in the league. i know it's a stepping stone season...but man, we're still falling in and drowning....tee he.

we need some pitchers first...every game we gave up a ton of runs it seems like.

Quit losing to Nebraska...in any sport.