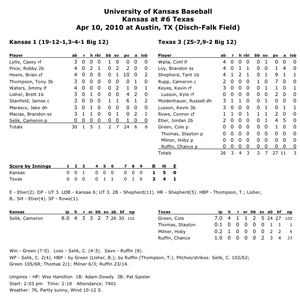 Austin, Texas — Texas’ Tant Shepherd ripped a two-out home run in the bottom of the sixth inning to bust a 1-1 tie and lift the Longhorns to a 3-1 baseball victory over Kansas University on Saturday at Disch-Falk Field.

Robby Price drove in the only KU run with an infield single in the third inning, giving KU a 1-0 lead.

UT tied it in the fifth on a sacrifice fly by Connor Rowe and took the lead on Shepherd’s solo shot to left field.

Selik struck out seven while walking two Longhorns. He retired 12 of the 24 batters via fly-ball outs. UT’s Cole Green allowed one run off four hits with two walks and five strikeouts. He improved to 7-0.

KU threatened in the fifth, seventh and eighth innings, but hit into ground-ball double plays each time.