Swagger to be put to test

Southern Miss and its big receiver to challenge Jayhawks’ secondary 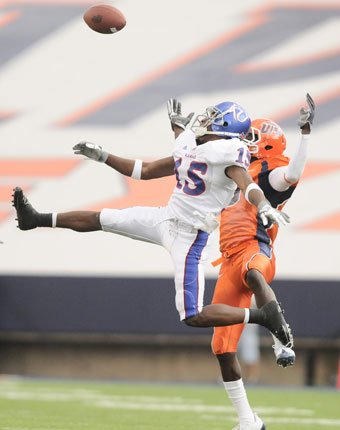 Kale Pick is learning from one of the best QBs in Todd Reesing. Pick will look to take over the starting job when Reesing graduates.

If you ask them, cornerbacks will tell you that playing their position ultimately comes down to confidence — a belief in one’s own talents, the ability to shake loose the after-effects of an earlier miscue, the knowledge that the next play always will end favorably.

In the Kansas University meeting rooms, they call it “swagger,” and they’ll tell you no successful corner can function without it.

“Confidence is the absolute most important thing,” KU cornerbacks coach Je’Ney Jackson said Tuesday. “If a corner loses confidence, then things can go downhill from there. So that’s what I preach to my guys. That’s something I tell them every day.”

Last season, in the middle of a massive midseason secondary overhaul, that confidence was sometimes tested.

As the Jayhawks struggled to a national ranking of 114th in pass defense, giving up a handful of big plays a game and adjusting to the absence of former All-America cornerback Aqib Talib, players were admittedly unsure of themselves at times.

Through three games this fall, however, the No. 20 Jayhawks have been markedly improved. While they’re currently allowing 225 passing yards per game — just 72nd nationally — this speaks more to their opponents’ rampant use of the pass once they’ve fallen behind. In a display of bend-but-don’t-break defense, the Jayhawks have allowed only two passing touchdowns in three games.

As a result, members of the secondary — including corners Daymond Patterson and Chris Harris — are feeling pretty good about themselves these days.

“I’ll tell you what,” Jackson said, “I’ve got some guys that are playing very confident right now.”

Which is good, because a strong dose of self-confidence will probably go a long way Saturday at Memorial Stadium, when the team’s corners will find themselves matched up against Southern Mississippi’s talented — and particularly large — sophomore receiver, DeAndre Brown.

Having caught just nine passes for 82 yards in two games this season, Brown’s numbers aren’t especially earth-shattering, but his size (6-foot-6) and obvious talent (he caught 67 passes for 1,117 yards and 12 touchdowns as a true freshman last season to earn freshman All-America honors) have paved the way for a number of dominant performances, including a 221-yard, four-touchdown outing against Rice midway through the 2008 season.

In short, he’s the kind of player who specializes in draining corners of their aforementioned swagger.

“You can’t change the structure for one guy,” Kansas coach Mark Mangino said, asked whether the team will make adjustments to account for Brown’s size. “You’ve just got to play well. Play good, sound fundamentals, understand what he’s trying to do and what his strengths are and how to play against those strengths.

“But he’s a very talented guy.”

Despite the upcoming challenge, however, Patterson, who is listed at 5-9, insisted his approach and demeanor will remain much as they have throughout the team’s first three games this season.

“I don’t think you can go out there and be like, ‘OK, this play or this man — this guy is going to be good, so I have to have a different type of swagger out there,’ or, ‘I have to be more cocky this game or be more vocal,’” he said.

Another technique would be for the football teams defensive unit to imagine KU basketball jerseys on their opponents. This should give them that nasty edge they are looking for...

I think I would have to disagree with the cornerback coach when he says...

"While they’re currently allowing 225 passing yards per game — just 72nd nationally — this speaks more to their opponents’ rampant use of the pass once they’ve fallen behind."

It also speaks to the 60% completion rate against them. That is disturbingly high, tho overall better than last year - at least at this point.

I wouldn't be too concerned with talent. If they didn't have some degree of talent they wouldn't be in here in the first place. It's the coaches job to get them to play to the best of their ability and obviously they believe the cornerbacks need confidence to accomplish that. I'm not about to question them in that sense.

No offense, but there are different degrees of talent level even within the NCAA. I agree that we are lacking talent....to be more precise...speed! I guess we will be finding out soon enough how good our D is.

I agree 100% but we can only work with the talent we have...there is no way to make them more talented only to teach them to use their talent better. I'm all for bringing in the best talent possible but coaches must work with that have.

I remember Little Joe Washington, RB at OU. He looked like the smallest guy on the field (and probably was), but if he got to the outside, he had a burst of speed that laid defenses to waste.

So, chuck, you're right that we can't just snap our fingers and magically make our players more talented, but if our defense gets punked, it is more likely because we don't have enough talent rather than we have too much or too little swagger!

So, I still say that talent is the most important...physical and mental ability

i fully expect that our defense will get punked from time to time. Hopefully it happens less and less as we build our program up and bring in better and better talent. I think this game will actually be the best measuring stick between now and the OU game as to how good the defense actually is.

There's no reason this team shouldn't have a bit of swagger with all the success they have achieved the last 2 seasons. (NU, MU, Orange Bowl...) Their confidence is building higher and higher. Yet, the losses to South teams will keep them from getting too confident and overlooking anyone.

Yeah but there's a fine line between arrogance and confidence, how do you think Memphis gave you the championship in 2008 in hoops. Tigers got cocky.

I definitely can see the progress over last year's D. But we'll see how much progress there is once we face the likes of OU, TT, and UT. So Miss is solid too, I hope we're giving them all the credit they deserve.