Members of the KU women's cross country team group together during the early part of their 5K run during the Bob Timmons Classic at Rim Rock Farm Saturday, September 5, 2009. Rebeka Stowe (#190) and Kara Windisch (#194) finished first and second, respectively, in the event. 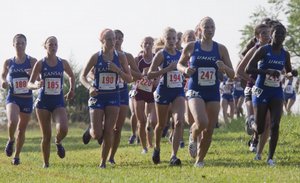 No, it wasn’t the customary cool-down jog or even a lap or two around the grounds to keep her limbs loose that kept Stowe’s legs pumping. Instead, it was her 2-year-old cousin, Alex Hanson.

Unfazed by the hordes of spectators and competitors that towered over him, Alex, like his older cousin, found room to run whenever he could wiggle away. With family members chasing him from all angles, Stowe appeared to be the best equipped to track the tyke down.

Saturday, Alex’s advice worked brilliantly as Stowe, a sophomore from Olathe Northwest High, paced the KU women to a team championship at the squad’s only home meet of the season.

The KU women and men won team titles, but Stowe was the only KU runner to finish with an individual gold medal.

“I thought (Rebeka) and Kara would be right up there,” Whittlesey said. “It just seemed like Rebeka wanted it a little more today, but it was a great start for both girls, and really for our entire team. They’re starting to understand that running in unison makes you a lot stronger than running as a bunch of individuals.”

That was the idea for the KU men and women Saturday, and both teams executed their attack flawlessly.

“The whole plan was to see where we are as a team,” said sophomore Zach Zarda, who sprinted hard at the finish to secure seventh place in the men’s race. “We have a lot of confidence in our top runners, and today the idea was for them to pull us through the first couple of miles.”

That put the focus squarely on the shoulders of sophomore Donny Wasinger (third, 19:24), who said after the 6K run that leading a team with this kind of talent wasn’t all that difficult.

“It’s been a good season of training so far,” Wasinger said. “There’s not too much work to do during the race because most of our guys are in good enough shape to stay up near the front.”

Although the KU men were held out of the top two individual spots, they could not be denied in the team standings. Thanks to top-10 finishes from five Jayhawks — Wasinger, Zarda, David Roberts (fifth, 19:34), Bret Imgrund (sixth, 19:35) and Austin Bussing (ninth, 19:39) — KU easily won the team title, finishing with 30 points, 47 ahead of second-place Garden City.

The women were equally dominant in the team standings, finishing with 19 points. The University of Missouri-Kansas City came in second with 78.

“We have a sense of pride when we run here,” Stowe said, “because this is our meet, and we knew we had to step up and win it.”

The Jayhawks will travel Saturday to Columbia, Mo., for the Missouri XC Challenge.

That is great! Keep up the great Work, Cross Country Team!

Congratulations, CC team. Tough day to get much attention.