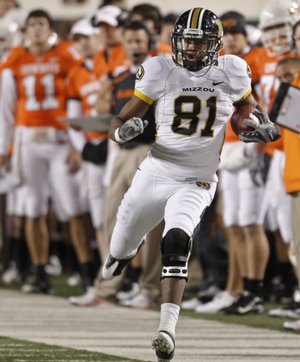 Missouri wide receiver Danario Alexander takes a pass from quarterback Blaine Gabbert by the Oklahoma State sideline in the first quarter of their game Saturday in Stillwater, Okla.

As a senior, and after four operations for various injuries, the often-injured Alexander has finally emerged as a go-to player who’d make Maclin proud.

Alexander had a career-high 180 yards on nine receptions in last week’s loss at Oklahoma State, with a 48-yard catch and run that put the Tigers ahead in the second quarter, and added catches of 50 and 34 yards. While sophomore quarterback Blaine Gabbert has been hobbled by an ankle injury the last two games and running back Derrick Washington has been bottled up by defenses, Alexander has been a constant threat.

“Danario made a bunch of great plays,” Gabbert said. “Defenses are starting to key on him a little more but somehow he always gets open.”

Alexander has led the team in receptions in five of six games and has been especially productive on the road, averaging nearly 10 catches and more than 160 yards.

He’s already achieved career single-seasons highs in every offensive category, leading the Tigers with 44 receptions for 627 yards and is tied for the team lead with five touchdowns heading into tonight’s game against No. 3 Texas.

He’s second in the Big 12 and ninth in the NCAA in receiving yards with an average of 104.5 yards.

Prior to his breakout year, Alexander’s previous best was 417 yards on 37 receptions in 10 games after returning from the wrist injury. Three times this season he’s established career bests for receiving yards.

“It might not be fair to compare him to Maclin, who might be the best single player at any position I’ve coached in 32 years in college football,” coach Gary Pinkel said. “But I’ve said all along that he’s a guy that if he’d have been healthy his whole career, he’d be considered among the top 10 or so receivers in the country.

Alexander is from Marlin, Texas, and grew up rooting for Texas and will be facing the Longhorns for the second time. Alexander was hampered by a high ankle sprain for last year’s game at Texas and was held to two receptions for 18 yards in a 56-31 loss.

“I have confidence now that everything is healthy and working properly,” Alexander said. “I want to go to the line every play and know I can beat the man in front of me.”