Texas quarterback Colt McCoy (12) celebrates on the final play of the game against Oklahoma. The Longhorns held off the Sooners, 16-13, on Saturday in Dallas. 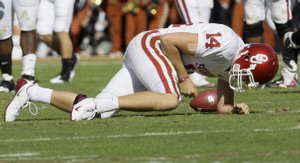 Dallas — Colt McCoy was a mess. His right thumbnail was ready to fall off, a nagging cold was wearing him down and Oklahoma was confusing him with blitzes he’d never seen.

Then, with a chance to put the game away for No. 3 Texas midway through the fourth quarter, he threw an interception that could’ve turned into a go-ahead touchdown for the Sooners.

McCoy salvaged it all, though. He made a game-saving tackle on the pickoff return, then, after his defense got him the ball back, managed to grind out the final 3:31, sending No. 3 Texas to a 16-13 victory Saturday over a No. 20 Oklahoma team that again lost Heisman winner Sam Bradford.

“You’ve got to be confident in yourself and trust your teammates,” McCoy said. “‘Let’s find a way to win.’ We did.”

The sloppy performance did little for McCoy’s chances of winning the Heisman Trophy and it won’t earn much respect for a team that slipped a spot in last week’s poll. But what matters most to McCoy and the Longhorns (6-0, 3-0 Big 12) is remaining in line to play for the national championship — and, well, it always feels good to beat their rivals from across the Red River, especially in front of 96,009, the largest crowd in the 104-game history of this series.

That explains why the usually humble McCoy gave a huge fist pump to the burnt orange end of the Cotton Bowl before the final snap, drawing a roar from fans already celebrating their fourth win over the Sooners (3-3, 1-1) in five years.

“It’s such an awesome feeling,” said McCoy, who joined Bobby Layne and Peter Gardere as the only Texas quarterbacks to beat Oklahoma three times. “This is one of the greatest games in college football. Knowing it wasn’t that pretty, but you gave it your best effort ... I’m speechless.”

In the first quarter, Bradford reaggravated the right shoulder injury he sustained in the opener, but was never out of this one. Backup Landry Jones put the Sooners up 6-0 and he drove them for their only touchdown right after Texas scored its only TD, tying the game at 13 in the third quarter.

But the Sooners ran for minus-16 yards on 22 tries. They were stuffed on a fourth-and-1 at midfield at the start of the fourth quarter, then, down by a field goal, asked Jones to win it. His last two drives ended on interceptions, first by Aaron Williams (who KO’d Bradford) then by Earl Thomas.

Texas ran six straight times after that, with McCoy keeping it three of them. His last plunge was for only 1 yard on third-and-8 but a penalty on Oklahoma provided the game-ending first down.

“I thought it was more like a fight,” Longhorns coach Mack Brown said. “It was tough, it was ugly.”

McCoy was only 21 of 39 for 127 yards, with a pair of turnovers within 10 yards of the end zone. Besides the fourth-quarter interception, he fumbled at the end of a long run late in the first half. That came during a spurt of five fumbles in the final few minutes; Oklahoma dropped three of them, losing two, but Texas got only a field goal out of it, and the Sooners didn’t score off Texas’ miscues.

McCoy banged his thumb on his passing hand against the helmet of Oklahoma’s Gerald McCoy during the first quarter, but insisted that had nothing to do with throws that at times were wildly inaccurate. He also got away with two passes that Keenan Clayton could’ve intercepted, and perhaps returned for touchdowns, late in the first half.

“Everyone gets beat up, everyone gets knocked around, especially in a game like this,” McCoy said. “It didn’t affect my throwing. You’ve got so much adrenalin going, a little thumb injury is not going to take you out of it.”

No, but well-schemed blitzes might. The Sooners did a great job of sending more guys than Texas could block and in ways that left McCoy wondering who was open. He only completed four passes for 22 yards to his favorite target, Jordan Shipley.

Freshman Marquise Goodwin scored Texas’ touchdown, turning a slant into an easy score after dipping under a defense who was reaching high.

The rest of Texas’ points came from kicker Hunter Lawrence, who hit a pair of 42-yarders and one from 32 early in the fourth quarter.

The Longhorns didn’t run much, or well, in the first half, but improved in the second half. They finished with 142 yards, led by 71 from Fozzy Whittaker, 33 from McCoy (including more designed runs than usual this season) and 31 from Cody Johnson.

With only 16 points, the Longhorns likely will lose their status as the nation’s highest-scoring team. But the big stat this week is the BCS standings that come out for the first time on Sunday.

The Sooners have lost three games by a total of five points. While last season showed they can lose this game but still win the Big 12, they have no chance at a national championship and Bradford’s career may be over.

Bradford returned for his junior year despite knowing he would’ve been guaranteed millions as a top pick in the NFL draft.

“It’s really hard to put into words the frustration I feel right now,” he said.

Jones was 24 of 43 for 250 yards, with a 35-yard touchdown to Ryan Broyles, who overcame a hairline fracture in his shoulder blade two weeks ago.

Oklahoma’s other scoring came on kicks of 26 and 37 yards by Jimmy Stevens. He also missed a 45-yarder.

“They were more physical up front than we were,” said Murray, who also had 116 yards receiving, 64 on one play. “They got the best of us today.”