Let’s get it started 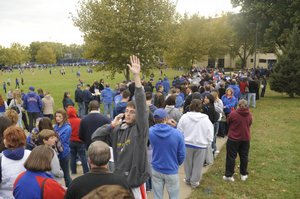 The 25th-anniversary edition of Kansas University’s “Late Night in the Phog” had a lot in common with so many season-opening basketball extravaganzas of the past.

“They made us do some goofy stuff tonight,” KU freshman guard Xavier Henry exclaimed Friday after the Jayhawk men’s and women’s teams danced, performed a skit apiece and scrimmaged to the delight of 16,300 fans in Allen Fieldhouse.

• All the players gyrating to a wide variety of music, the highlights including freshman guard C.J. Henry wearing yellow basketball short-shorts from the mid 1980s, freshman big man Jeff Withey frolicking in a blonde wig and seniors Mario Little and Sherron Collins shuffling while wearing black hats and slacks and bright red shirts with suspenders and a white Michael Jackson glove.

“Anybody notice Elijah Johnson looks a lot like Eddie Murphy out there?” Self joked. “I hope for our sake Jeff Withey can play ball better than he dances.

“I thought the highlight of the dance was the seniors. I thought Mario acted like he knew what he was doing.”

As far as the 20-minute scrimmage ... the Jayhawks acted like they knew how to play basketball, at least on the offensive end.

Sophomore Markieff Morris hit three three-pointers in three tries — yes he’s the same 6-foot-9 player who made three of 16 treys his freshman campaign — and scored 15 to pace the Blue team to a 42-39 victory over the Travis Releford-led Red squad.

Sophomore forward Releford hit all six shots from the field, including two threes, and scored 15 points for the Red squad, which made 61.5 percent of its shots to the Blue’s 53.3 percent mark.

“If Travis shoots the ball like that, he’ll have a chance to play all the minutes he wants,” Self said. “He has really worked hard on his shot. It’s one thing he had to improve on ... to be more consistent shooting the ball. If he can knock down his perimeter shots, he’ll be hard to guard because he can drive the ball.”

As far as three-point bomber Morris: “I don’t think anybody can go 3-for-3 every night,” Self said. “Last year he didn’t make many shots. When we recruited him, he was a good three-point shooter. One game in high school he made 10. He won’t shoot that many for us. It is nice to have a big guy who can stretch the defense or be a threat to because that’ll definitely isolate Cole (Aldrich) down there.”

The soft-spoken Releford said he has put on five pounds since last season. He now weighs a solid 205.

“Nothing was really structured. I knocked down a few good shots. A few teammates saw me and got it to me,” Releford said. “I don’t know what my role will be this year. I know I’m going to try to get extra possessions, try to get other people shots and knock down open shots. That’s what coach wants me to do.”

Of the Jayhawk newcomers, Thomas Robinson had nine points off 3-of-8 shooting (he hit a three) and five rebounds. Henry and Elijah Johnson each had six points, Johnson knocking down a three. Xavier Henry had three steals and hit a three.

“I was just happy to be out there. It was nerve-wracking knowing you had to be that goofy in front of people, but you just have fun with it,” Henry said. “We stressed over it the whole week. We were nervous up until the time we went out there. Once we went out there, it went away.”

Xavier’s big brother, C.J., who had a basket in his KU debut, knew baby brother was tense.

“Watching the (highlight) video, he was over there holding his hands together, looking real nervous. I could tell. I’m his brother,” C.J. said.

“I tried to talk to him when we got out there, to just have fun. It’s basketball, the same game.”

Sort of. Late Night basketball can be a bit sloppy.

“Guys made shots because nobody guarded anybody,” Self said. “It was a H-O-R-S-E contest, pitiful play in some regards. You can’t expect anything other than that. I do think we have some nice pieces. It was good for the freshmen to get out there more so than anything, in the lights and see what it’s like. I thought a couple played pretty well.”

The Jayhawks will get after it for real with a morning practice today.

“We’ve got a lot of stuff we need to clean up. We have to all get on the same page,” C.J. Henry assessed.

Probably one of the best late nights ive been to, releford was a beast from the get go. here's a low quality youtube of his alley oop on the first play.

yes RELEFORD is a sophomore ross

Yes it was just a scrimmage but we sure looked good! I watched the midnight madness show after I got home and we by far looked the best!

Deep team+bill self+sherron/cole=a great chance to cut down the nets in Indy!

Is it my imagination? The new recruits DO NOT look like they're having fun (in photo) sitting behind the bench watching the preceedings! Anybody have first hand info on their reaction to late-night?

The recruits probably couldn't hear anything.

Sorry for this, but Woolridge (far left) was the only one I recognized and who looked even remotely like he wasn't bored. The two on the right at least participated (put their arms around their neighbor) during the Alma Mater. The one in the middle didn't want any part of it (pushed the arm off in a light-hearted manner).

KUTPO, excellent observation. We sat across from the recruits and kept an eye on them all night. They were pretty subdued. A bit more than previous recruits on Late Night. But who knows what those young eyes were witnessing.

Allen was crazy last night, loud and incredible. The freshman looked great. Robinson and Johnson will be something special.

My teenage daughter remarked that she thought Xavier may be here two years because he didn't show strong right-handed dribbling skills. My eyes bugged out when I looked at her. But she may be right. One thing for certain, he has a baller's body. On one drive to the hoop, he took two guys up to the basket with him, on his arms, and still got the shot off!

Any idea if the Midnight Madness show is going to replayed on ESPNU?

Tyshawn played and Brady did not.

slaterman, It will on my TV... through the magic of DVR!

Travis looks monstrous this year. I can't believe he only put on five pounds. He looked every bit as big as Xavier and played way better. If Travis can maintain the level he showed last night, the 3 spot to start the season is his to lose. Both the Morrises look light years from where they were last year. It looks like it will be between Withey and Robinson for the fourth spot in the big man rotation. Robinson has great athleticism, but a run-n-gun scrimmage doesn't facilitate WIthey showing his game. I was thinking Travis started the scrimmage at the 2 for red. Imagine how athletic we would be if we played him a few minutes at the 2 with Tyshawn spelling Sherron at the 1 and Xavier at the 3. Travis still has to prove he can hit the jump shot, but I think he is going to earn big minutes this year and be a 12 points a game starter his final two years.

I wish there was a way to tell how the recruits felt about Late Night. Whenever I glanced at them none of them seemed to be standing or enjoying themselves..

Everything went perfect last night except...the sound quality was bad, real bad. I do not think the recruits looked bored. After they got their standing o's after walking into the fieldhouse you know they were thinking, "WOW, wouldn't it be nice to play here in front of these fans!" Just trust HCBS to bring in the right players to fill the spots needed.

Lets continue the Big XII Champ. streak and get us another title! GO HAWKS!!!

slaterman- I would not even suggest watching the ESPN Midnight Madness, the majority of it was on Georgetown, Kentucky, UNC, and Duke. I thought they would give the preseason number one more airtime than the others like in previous years but I guest since we are in the Midwest that didn't happen. The show was dissapointing at best. ESPN also put up a statistic that said KU went 18-1 last year at home when we went 19-0.

Here's a link to a decent AP story about last night:

The final quote on the story from Bill Self may be prophetic!

I think because of his age, CJ is limited in how much eligibility he has. So whether you call him a freshman or a sophomore, doesn't much matter. I think he only has 3 years of eligibility left, though I'm not an expert on such things, so I could be wrong...