KU running back Toben Opurum gets wrapped up in the first half of the Kansas/Iowa State game.

Video highlights and a game recap from the October 10, 2009 contest.

Who was KU's MVP against Iowa State?

Kansas only half bad

We had a chance 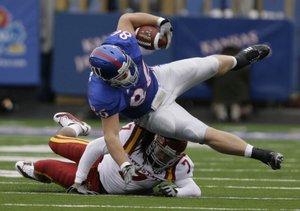 Todd Reesing passed for 442 yards, and Kerry Meier had a school-record 16 receptions for 142 yards in KU's five-point victory. 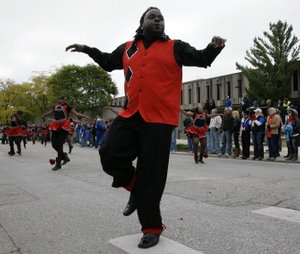 Toben Opurum did a little bit of everything Saturday against visiting Iowa State.

• carried the ball 24 times for 98 yards and a touchdown;

• showed the kind of stamina it takes to succeed in an ultra-competitive Big 12 Conference.

And on a day in which the Jayhawks needed all the offensive help they could get, the performance had Kansas University football coach Mark Mangino singing the true freshman running back’s praises following Saturday’s 41-36 victory over the Cyclones.

“He played every down that we had a running back in the game,” said Mangino, whose team held on for a 41-36 victory. “He ran the ball hard. He was tired in the fourth quarter and continued to run and pass-protected nearly flawlessly.”

The coach called the player’s effort “tremendous,” while revealing that Opurum wasn’t cleared to work out this summer until the start of August training camp due to an undisclosed physical condition and had to struggle to make up for lost time during the ensuing weeks.

Neither Mangino or Opurum detailed what, exactly, the condition was, but Opurum said afterward, “It was an issue we had to take care of, and we took care of it, and I’m feeling well right now.”

Opurum’s performance over the past two games in the absence of starter Jake Sharp — out for the second straight week with an injury sustained before the team’s Sept. 19 game against Duke — has represented a pleasant surprise for 16th-ranked Kansas, which also could be without Sharp next week when the Jayhawks take on Colorado in Boulder.

Mangino said Saturday that Sharp’s status for the game is up in the air — he cited a slower-than-expected recovery process and a desire to preserve the player’s health in the long-term.

Reesing rests legs: While Todd Reesing routinely has shown a propensity throughout his career to pick up good portions of yards with his feet, he let his arm do most of the work Saturday.

The senior quarterback’s 442 passing yards were a career high and the second most in school history —trailing Mike Norseth’s 480 in 1985 — while his four touchdown passes marked the seventh time in his career he has thrown at least that many in a game.

“If you give Todd Reesing time to throw the ball, you’re going to have some serious problems no matter who you are,” Mangino said. “And he proved today that he can scramble, he can run — but he can be a good, old-fashioned pocket passer when he needs to be.”

Kickers struggle to connect: Saturday proved a rough day to be a placekicker.

Iowa State’s Grant Mahoney, who was 47-for-47 in career PAT attempts before his potential game-tying kick against Kansas State was blocked las week, missed his first two attempts Saturday (one was blocked), and Kansas’ Jacob Branstetter followed suit, missing his first extra-point try before settling down to make his next five.

The struggles were uncharacteristic for both kickers, though Mangino declined to attribute the players’ woes to the game’s unfavorable weather conditions.

I thought Mahoney was perfect on PAT attempts before his potential game-winning kick against Kansas State was blocked, and 47-for-48 coming into the game with KU.

That's what it says now. Must have made a correction. Good catch.

The blocked PAT in the K-State game would have tied the game at 24, not won it...