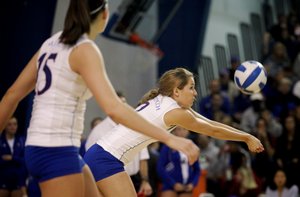 The latest Big 12 Conference giant on the Kansas University volleyball team’s schedule came to KU’s Horejsi Family Athletics Center wielding a huge shield to go along with its sword.

“They were pretty darn good, we were a little bit off our game, and the result was not favorable,” KU coach Ray Bechard said.

It’s not that the Jayhawks didn’t compete, more that the Cyclones simply were too sharp in all aspects of the game for it to matter.

Offensively, Iowa State finished with 42 kills and a .282 attack percentage. Kansas, meanwhile, attacked at a .129 percent clip and committed 21 errors.

Defensively, the disparity was even more evident, as the Jayhawks stuffed the Cyclones just twice, while ISU finished with 13 blocks — the second-most by a KU opponent this year — most coming from 6-foot-3 sophomore Debbie Stadick and 6-2 freshman Jamie Straube.

While the Jayhawks continued to swing away from the outside, the Cyclones benefited from a disorganized KU attack. KU’s passing and setting left plenty to be desired all night, which created tough situations for its hitters.

“When they get you a little out of system and your setter only has one choice, they can set that block up, and that’s what we saw a bunch tonight,” Bechard said.

Added KU’s sophomore setter Nicole Tate, who finished the night with 31 assists: “We are a good team, and we looked amateur tonight. We got outcoached, outworked and outplayed, and it was very disappointing.”

The night wasn’t without its positive moments for the home team. Both Bechard and Tate praised KU’s overall team defense and emphasized the fight and effort the Jayhawks showed throughout the match.

“I thought Jenna gave us the opportunity to move some people around,” Bechard said. “And Paige had some success, too. But we have to get her more than 19 attempts.”

The loss is KU’s third straight to a conference team ranked in the top 30. The Jayhawks were swept by No. 26 Texas A&M and No. 9 Nebraska on the road last week.

“In the Big 12, you never get a break,” KU senior Katie Martincich said. “It’s tough when you get stuck in those streaks of playing three ranked teams in a row, but at the same time everybody else is doing it, too.”

For Kansas, which still sits one victory shy of the 900th career victory for Bechard, things figure to get tougher before they get easier. KU welcomes No. 2 Texas (12-0, 7-0 Big 12) to town Wednesday.

“Athletically, they’re on par with what you see at the national team level,” Bechard said of the Longhorns. “When you run through the last three opponents that we’ve played, you begin to doubt yourself a little bit: Are we still a competitive team, are we still a good team? There is not one moment where you can doubt yourself in this league or take a step sideways or back. We can only look ahead at what we’ve got in front of us. We play the best team we’ve seen all year physically on Wednesday, so why not take that as a great opportunity?”

Another Big XII match and another sweep for opposition. Get rid of Coach Bechard!

And you fail to realize that ISU is ranked 14th in the Country.

No Code its not that we fail to realize that ISU is ranked, its that we realize why the hell is ISU ranked ahead of us? Bechard had some great teams and didn't build off them. We have heard bad things about his recruiting techniques etc. Every team in the BIg 12 north is great but us? With new facilities being built for the non-revenue sports its time for a change(and not the Obama kind).

No doubt Bechard is a great guy but time for Lew to move him to another part of the the Athletic Dept.

the team has 4 seniors. not sure where you get your information. all 4 of them are significant players too