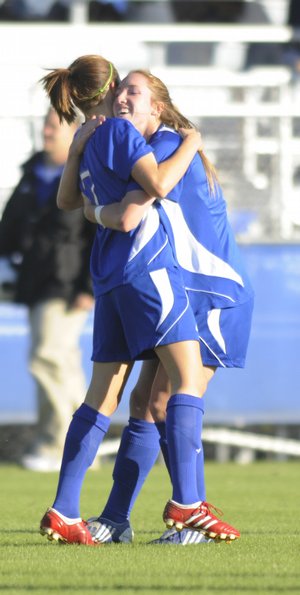 Kansas University’s Whitney Berry (7) embraces teammate Shelby Williamson after a Jayhawks’ goal in the second half. Kansas held off Texas Tech, 3-2, on Friday at the Jayhawk Soccer Complex.

Well, this was refreshing.

Having played three Big 12 games entering the weekend — and having come away winless in each — the Kansas University soccer team was in need of a breakthrough, and it got one Friday, using a three-goal second half to hold off visiting Texas Tech, 3-2, and earn its first conference victory of the season.

The past two weeks have not been kind to the Jayhawks, who, after jumping as high as 13th in the national rankings, were shut out by Oklahoma State and suffered back-to-back, one-goal losses to No. 15 Texas A&M and Texas.

But after the rough conference start — which included a less-than-stellar first half Friday —Kansas (9-4-1 overall, 1-3 Big 12) finally managed to put everything together. Freshman forward Whitney Berry had her best game as a Jayhawk, tallying two goals and an assist, and the team’s offense, facing the prospect of an 0-4 conference start, sprang to life.

Less than 10 minutes into the second half, Berry took a pass from KU defender Kim Boyer and booted it into an upper corner to tie the game at 1. She added another just seven minutes later, recovering a loose ball in the box and tapping it in to push Kansas’ lead to 2-1, and Williamson padded the Jayhawks’ lead in the 63rd minute, notching her team-high sixth goal of the season.

“It was like a different team in the second half,” said Berry, who against the Red Raiders (8-5-1, 3-1-1) doubled her season goal total. “We came out a lot harder and just played better.”

Now the trick will be keeping it going over the course of the next two weeks.

Four of the team’s last six regular-season games will be played at home, and Sunday’s 1 p.m. matchup against Colorado — a team that entered the weekend in sole possession of first place in the Big 12 — will provide the next opportunity to make up ground in what is shaping up to be a tight conference race.

“We knew these two games were going to be tough,” KU coach Mark Francis said of this weekend’s doubleheader. “The same kind of intensity and quality that we showed in the second half (tonight), we need to come out like that from the beginning of the game on Sunday.”