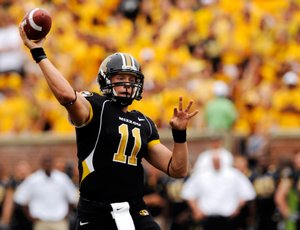 Missouri quarterback Blaine Gabbert throws a pass in this Sept. 19 file photo against Furman in Columbia, Mo. Gabbert and Missouri will play host to their first Thursday night game in 17 years against Nebraska tonight.

Columbia, Mo. — No one in the country has scored less than whoever is playing Nebraska in a given week.

No one has cared less, it seems, than Cornhuskers coach Bo Pelini.

That’s probably because No. 21 Nebraska (3-1) has shut down three Sun Belt teams and Virginia Tech’s inconsistent attack, holding them all to a total of 28 points through four games.

“I’m not satisfied with where we are as a defense,” Pelini said. “We have a long way to go yet.”

Blaine Gabbert and No. 24 Missouri seem likely to fare better against the nation’s top scoring defense when the Tigers host their first Thursday night game in 17 years.

The Tigers quarterback has thrown for 1,161 yards and 11 TDs — without an interception — this year, also against a soft schedule, though Missouri did play a Big Ten team, beating Illinois, 37-9, in the opener.

The Big 12 opener for both teams will provide each a measuring stick for the rest of the season.

Gabbert, a sophomore who backed up Chase Daniel last year, leads the Big 12 in passing efficiency.

He’ll be trying to lead Missouri (4-0) to its fourth straight 5-0 start against a bitter rival — though one for whom the tables have turned a bit.

The Huskers won 24 straight in the series before Missouri broke that streak with a 41-24 home win in 2003, the first of three straight in Columbia. The Tigers won in Lincoln last year, and are aiming for their first three-game streak over Nebraska since the late 1960s.

Missouri’s most recent Thursday night home game was a 6-0 loss to Colorado in 1992. Coach Gary Pinkel couldn’t pass up the chance to play such a big game under the lights on a weeknight.

“A Thursday night game, that’s like Monday Night Football. That’s a no-brainer,” Pinkel said. “This is great not only for our football program but for the University of Missouri and Columbia, to showcase this town.”

His players, though, acknowledged the disruptions to the usual Saturday morning routine.

“I hate late games,” said center Jacob Hickman. “You sit in the hotel for what seems like two days. You’re sitting there kind of getting stir crazy, you just want to get started.”

I hate MU but I think a tiger victory here is in the best interest of the Jayhawks...

Which only could or should be done in Columbia under the cover of darkness, with sufficient body armor, strong beer goggles, and always always a round-trip ticket.