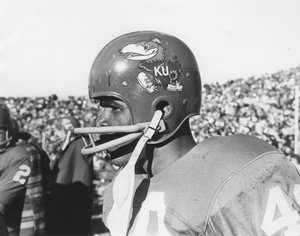 Former Kansas University running back Gale Sayers has earned the respect of many of the recent Jayhawks as the best ever.

• Inducted into the Pro Football Hall of Fame in 1977

When the news hit last month that former Kansas University running back Gale Sayers was coming back to Lawrence to become the athletics department’s Director of Fundraising for Special Projects, it didn’t take long for his return to the program to make an impression with the members of the 2009 team.

Whether they had heard of him before arriving in Lawrence or not — and most were honest when answering that question — it didn’t take long for this year’s Jayhawks to learn about the man widely regarded as the greatest KU football player of all-time.

“As soon as I signed my letter of intent, I had people asking me if I knew who Gale Sayers was,” said freshman receiver Bradley McDougald, who hails from Dublin, Ohio. “When we were in two-a-days, they showed a lot of film on him and showed a lot of history of KU and all the different things that the different players did to make KU the school it is today. I didn’t know too much about him. I knew he was a great player and knew he did a lot of great things in the NFL, but I didn’t know too much about him at KU.”

Thanks to the highlight reel, that changed quickly as McDougald saw enough footage of Sayers’ 412 carries, 2,675 yards, 6.5 yards-per-carry and 19 touchdowns over three seasons at KU to understand why the man they called the Kansas Comet earned such praise.

“After seeing all the clips and hearing all of the different things he did and records he broke, I’d have to say the best player in KU history is Gale Sayers, hands down,” McDougald said.

The results of a recent, informal poll of about a dozen current Jayhawks, illustrated that McDougald’s thoughts were shared by most of his teammates, although not all for the same reasons.

“Gale Sayers,” senior safety Darrell Stuckey when asked his opinion. “He was relentless when he played here, his resilience and his passion for the game. And he had a great impact on this campus as a whole. Not only is his name on the stadium but he has his own computer lab and had a great influence academically, as well.”

“Best-known, it’s hard to pass up Gale Sayers or John Hadl, two guys we’re lucky enough to have working with us,” said Reesing referring to Sayers and Hadl, now an associate athletic director at KU. “As for the best, it’s gotta be Gale or John, too. They both had such amazing careers both in college and in the NFL. Those two guys are definitely at the top of the class. I don’t know if I want to pick a clear favorite right now. I don’t want to get on anybody’s bad side.”

While most favored the old school answers, one member of this year’s team, freshman running back Toben Opurum, tossed out a more modern name. Although he first said Sayers — adding, “He was here the other day and everyone knew who he was as soon as he walked in. He seems like a great person and I hope to get to meet him some day.” — Opurum elaborated on his answer by saying, when it’s all said and done, KU’s senior quarterback could be mentioned in the conversation.

“If not Gale Sayers, I think Todd (Reesing) could go down leaving this place as one of the most talented guys to ever play here,” Opurum said.

Reesing has racked up some serious statistics to back Opurum’s claim.

Although he appreciated the nod from KU’s leading rusher, Reesing wasn’t so sure Opurum was thinking clearly when he answered the question.

“The fact that I was even mentioned in the same sentence with those guys is pretty astonishing,” Reesing said. “But I don’t think I’ve earned the right to be mentioned with guys like Gale Sayers and John Hadl at this point. They did some pretty unbelievable things. We’ll leave that topic for another day.”

Nolan Cromwell and Bobby Douglas deserve some mention here as well. I am amazed at how some of our great are not really mentioned as much as they should be.

Reesing will be consider one of the greats when he is done playing, but now is not the time. I have great respect for him saying that.

Riggins wasn't too bad either.

Defense: Willie Pless seems he was in on every tackle.

Not only was Gale one of the best to play at KU, statistically (albeit a short career due to injury) Gale was the best running back in the history of the NFL.

If stats are how it is measured, it's not even a close contest.

(plus I've never seen anyone find a seam & accelerate like him -- no defensive back in the league had a prayer -- very smooth & deceptive, the best ever)

Yeah, but what was his PER?

Your headline says "Close to consensus." A consensus is defined as "general agreement or accord." It does not imply unanimity. Sounds to me as if the respondents to your informal poll were not merely "close" to consensus; they reached consensus, if most of them named Sayers.

100 is right. i don't know about the best running back in the history of the NFL, but he's right in this sense......Gale Sayers, when he was actually running with the ball, was the best EVER.

now that sounds weird, but purely running with the ball, (past the line of scrimmage, or on kickoffs and punts), there wasn't anybody that could accelerate on a cut, or make guys miss, or simply have a sense where defenders were coming from, and then make a cut the other way....he was truly amazing. and when he was past you, he's gone.

I suppose Woodard belongs in that conversation as well.

All greats of their sport - but Sayers, Chamberlain and Woodard are THE names that come to mind when you mention their respective programs at Kansas.

MAXHAWK, I remember like it was yesterday, watching Cromwell hurdle the highbar in the Superstars competition. He was the first to do that and won the event easily.

when i was in high school in western KS, Nolan Cromwell still had the record at a freshman track meet in my hometown for the long jump....so that record at the time was 15 years old.

Nolan had the record for rushing yards in a game for a QB in NCAA div. 1 for like 25 plus years...and he only played half the game!

Yep, there can be quite a case for who is the best of the best KU football player of all time. Most all of the names have been mentioned above.

I believe it is best to judge them by what they did when at KU as a student rather than what they went on and did in the professional ranks. Also, the "older" players did not have access to the great trainers and weight rooms and equipment that is available today.

As for the best football athlete when at Kansas my vote goes to Nolan Cromwell. Next, Gale.

For the last three years I've been watching the greatest Kansas Football player that I have ever seen. #5 Todd Reesing.

he averaged 30 yards a kickoff return in the pros.

he averaged from scrimmage 7.12 total offensive yds per play in 1962...which is still a KU record.

like i said above, Gale is probably the best runner with the football...of all time.