KU basketball's boot camp is going well, according to head coach Bill Self.

Late Night, which will include videos, men’s and women’s basketball player skits and scrimmages, will run from 6:30 to 9:30 p.m.

No admission will be charged. Seating will be on a first-come, first-served basis. Children 12 and under will not be admitted without an adult. Fieldhouse doors will be closed when the arena reaches capacity.

Fans are encouraged to bring nonperishable food items to be donated to local food pantries.

KU on Monday unveiled its logo for the 25th Late Night.

Late Night, as usual, is a big recruiting weekend for KU. Harrison Barnes, a 6-7 senior small forward from Ames (Iowa) High, and Doron Lamb, a 6-4 senior shooting guard from Oak Hill Academy in Mouth of Wilson, Va., are slated to attend. Barnes and Lamb are ranked No. 2 and 21 respectively by Rivals.com.

Hinson trained for the event for four months. He participated in the event as a tribute to Frederick, the former KU athletic director who died of injuries sustained in a bike accident last June.

“I coached Brad (Frederick, Bob’s son) two years at Roy Williams’ (KU) camp,” Hinson said. “This was my first century ride in honor of Dr. Frederick, who was huge for me and my career. He was always kind to me.”

“I missed a turn. I rode 6.7 extra miles,” Hinson said, adding, “I had a great time until mile marker 93. After that, I didn’t know if I’d be able to get home or not. That’s when I went to the Gatorade and water.”

Hinson said completing the ride was “the biggest thing I’ve done physically in my life. I felt a sense of accomplishment. I wasn’t the only one out there,” he added. “There were 500 bikers. Some rode 40 miles, some 80 miles and people that had no brains, or bad brains, missed the turn and rode 106.7 miles. I met a lot of nice people. It was the time of my life.”

There was one negative to competing in the bike ride.

“I paid for it today. I can barely get up and down the stairs,” Hinson said.

The Octoginta piece deserves its own article - what a Lawrence institution. Good job doing that century, and here's to many more...

That explains the close to 1000 bicycle riders on Sunday blocking Traffic for about 10 minutes.

I am so excited for Late Night!!!

Take a week off to recover, Barry, then get back on the bike. You'll be stronger than ever.

Just look out for Cody. He's so important he can't be delayed for 10 minutes on a Sunday.

Speaking of Late Night in the Phog...........I am trying to compile a majority of the recruits that have attended Late Night during Self's tenure. Any help would be greatly appreciated.

2008: Xavier Henry, Michael Snaer, Dominic Cheek, and Elijah Johnson 2007: ? 2006: Cole Aldrich, Did Tyrel Reed attend? 2006: Sherron Collins and I'm not sure else attended 2005: I know for sure Julian Wright, Michah Downs, and Mario Chalmers attended because I remember them committing after the event 2004: Would have been Self's First recruiting class. Darnell Jackson, Sasha Kaun, Russell Robinson, Galindo, CJ Giles and company. Not sure if any of these guys were at Late Night.

Thanks for your help.

mjlindsm: That may be true, but this article said he did visit Late Night. That is what I was going off on.

That article is from when Wright is a freshman, performing at Late Night. He committed to KU without ever setting foot on campus.

koolkeithfreeze: You are right that that article is from Wright's freshman year, but in the middle of the article it references "Last Year" and Michah Downs talked about how much he enjoyed Late Night as a recruit. This article is probably wrong as I remember something now about Julian never stepping foot on campus.

I'm not sure about Late Night but I was sitting behind the bench for a final season game against Norm Stewart and Mizzou with my good friend Carl and sitting in front of us were Hinrich, Gooden and Collison, all with their parents.

Carl and I spent the whole game discussing the virtues of Kansas and discussing how Roy would never treat his players they way Norm treated his. The kids didn't pay much attention to us, but the mothers sure did. Carl and I like to think that we, in some small way, helped recruit three future KU greats.

My point is, if any of you happen to be near the recruits and their parents on Late Night, take the opportunity to show as much class and positive reinforcement as you can. It is a scientific fact that no living creature has better hearing than a mother regarding their child.:}

"KU on Monday unveiled the logo..." thanks for letting us know, but I would much rather see it than just hear about it. Anyone know where we can see the 25th logo??

If they open the doors any earlier and start any earlier, it is going to have to be called "Happy Hour."

You know this is off topic, but it is interesting that this is the second story in a matter of days where a recruit has stated or mentioned that they haven't heard anything from the Kansas staff and the recruit seemed puzzled. I just find it kind of odd that with the recent negative press, you wonder other people are getting in the ears of these recruits. Only time will let these "Negative Images" pass.

Here was the article the other day from zagsblog about Terrence Jones. Again, just find it odd that all of sudden recruits aren't hearing from the KU staff. I find that hard to believe unless Self has something in store for us.

OakvilleJHawk - typically at Late Night, the recruits are sitting behind the north bench and this entire section is reserved for VIPs. When the recruits show up, right before the festivities begin, the crowd goes wild. Then all the video begin. Kids who walk away from that are probably worried about playing time or academics. I'm not sure any random fan could sit near them or have much of a direct impact on their decsion. Your story is cool though.

good points, but this was a Senior night game, and, now that you mention it, it was odd that KU's top three recruits for that year happen to all have been there together.

And your also right about the VIP thing [years later, my friend Carl would kick in about Five Mil to build a new KU Schol Hall.]

Anyway, all you Hawks who have the good fortune of being at Late Night this year, for all the thousands of Hawks who would love to be there, do us proud!!!!!!

Many years ago, we used to camp at AFH and sit right behind the bench. When there were high profile recruits sitting in front of us, we would always talk it up and occasionally get a smile out of one or two of them.

If any of you have never gone to Late Nite and now have the chance to go, don't miss it. The highlight videos they play are incredible. The sense of history, nostalgia, and pride they convey always give me chills. It is all hype and the scrimmage is usually boring, but it is a great festive atmosphere.

Kyle Singler was at Late Night with Cole in '06. Didn't realize he used to sport a mop top... 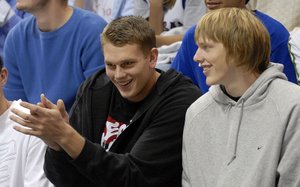 KU recruits visiting during Late Night in the Phog are Cole Aldrich, left, who has already committed to KU and prospective recruit Kyle Singler. by Mike Yoder

i believe i saw somewhere that CJ Henry was also at the late night with Cole....

For those of you still in search, see (what I think is) the Late Night logo here on the KU Athletics website..

25th annual?! Ok, that makes me feel really old. I went to the first Late Night with Larry Brown when I was a student.

I, too, attended the first late night festivities.

Is there any truth to a rumor that I have heard that nearly 4000 co-eds plan to strip naked to the waist inside the field house at this years Late Night and do the Rock Chalk Chant?

I want to say right now that I am shocked and appalled that such a lewd activity could even be considered by KU co-eds.

Are there still tickets left?

If you're referring to tickets for Late Night, it's free.

"No admission will be charged. Seating will be on a first-come, first-served basis."

Says it in the 3rd paragraph.