Mark Boyle takes a moment to talk with KU kicker Jacob Branstetter about what it takes to be a college football kicker. Branstetter made a career-long 57-yard field goal this season.

Editor’s note: This is the 50th edition of Mark’s on the Move. Future installments will be available exclusively during the 10 p.m. Sunday broadcasts of Sunflower Broadband’s Channel 6 News. To honor this milestone, Mark recalled a recent football moment. At the Oklahoma game in Lawrence, Kansas University placekicker Jacob Branstetter kicked a 57-yard field goal in a career-long effort. He takes us inside the mind of a football kicker. 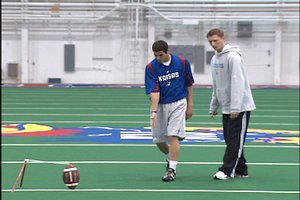 We’ve all heard the kicker jokes, maybe even been the source of one or two ourselves, but kicking a football through the uprights is much more difficult that it looks. Kickers make it look easy.

“I would literally spend hours and hours just getting to the correct position to kick and making it muscle memory,” said Jacob Branstetter, KU’s junior placekicker. “Then once it’s automatic, it’s just a mental game. That way when I come in on Saturdays I can just worry about being in the zone and focused.”

An entire childhood worth of work proved beneficial for Branstetter on Oct. 23, 2009, in KU’s Memorial Stadium. As the first half came to a close, he was presented an opportunity from 57 yards to prove, in front of his childhood team, that he could kick a long-distance field goal in a pressure-packed situation.

“There are so many stories behind that kick that no one knows about,” said Branstetter, a native of Lawton, Okla. “I know I have the distance, I have the leg. I think the biggest thing I thought about was just trying to hit the ball solid. If I can just hit this ball solid, I don’t have to kick it any harder than any other ball in my life. If I hit it solid, I will make this kick.”

The kick sailed through in a career-long effort. The attempt gave him his sixth point and sent the bells of the Campanile, along with his name, ringing throughout the sold-out crowd.

“The one thing I always say to myself is ‘stay slow and stay balanced,’” Branstetter said. “If I can stay slow and not rush myself and stay tall and balanced … that gives me a good opportunity to get in position, and like I said, the leg will take care of itself.”

As for the kicker jokes, Branstetter says he mostly dismisses them, but he admits some of the pressure can get to a kicker with a weak mental approach or shaken confidence. “We have a lot of sense of humor, but there are times when people poke fun at us, you know, ‘you guys need to be perfect,’ and it kind of gets us, I am not going to lie,” he said. “Why do we have to be perfect when no one else on the team’s perfect?”

Long snapper Kayl Anderson admits that special teams players are a special breed. He’s also the only one who truly gets away with any kicker jokes. Not because the two players are friends and work closely on the field, but because Anderson’s 4 inches and nearly 70 pounds bigger.

Branstetter is awesome. On every kickoff he's either tackling the returner or right in the mix. I love a kicker who's not afraid to play football.

Branstetter is an excellent kicker and team member of KU football. We are lucky to have him. His talent is rare and proven.

You guys are being way too nice.

He better work on leg strength. It's kinda sad when a kicker can't get the ball in the endzone with the wind at his back.

Branstter does not have very good height or distance on his KOs. Under Magno KU has not had a leg since Johnny Beck and he was very inaccurate.

I also like Branstetter's toughness, but can we get someone on the roster who can get us touchbacks on a regular basis?!?!

He kicks off the way the coaches tell him to kick it. Blame the pooch kicks on Mangino.

They usually tell him to kick it with a lot of heighth to it, so the players can have time to run down and cover it.

Branstetter sucks, plain and simple. He can't kick with any depth or any height on kickoffs. You have to have one or the other or you need a different kicker. If he would hit it into the endzone, we wouldn't have to worry about him making tackles on kickoffs. He's a huge part of why our special teams are subpar this year.

I'll give him credit on that long field goal--nice work there. But I dont' want my kicker making tackles because that means he probably didn't have enough depth to get a touchback OR he didn't have enough height to let his coverage team get in place to make the play.

I love this kid. I love his attitude. He's a gutty winner.

The problem with Branstetter is we don't know what his distance is. He's made FG's from 50 and missed from 30. It's hard to know when you're in 4 down territory with that kind of inconsistency.