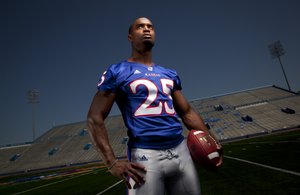 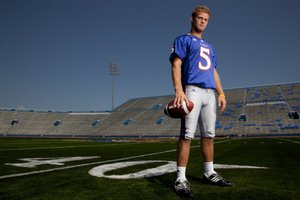 Four years is a lot of time.

Spend four years winning and losing and sweating and hurting with the same four guys — as Kansas University senior captains Todd Reesing, Kerry Meier, Darrell Stuckey and Jake Sharp have — and a certain bond is bound to be forged, the kind of bond in which the spoken word, often, is not necessarily a requisite for interaction.

“A lot of times,” Stuckey said, “I can look at Kerry and see on his face exactly what he’s thinking, just because we’ve been around each other so long and we’ve seen so many different sides of life together.”

Today represents a final act of sorts for the four players and the rest of their senior classmates. The Jayhawks’ 2:30 p.m. game against Nebraska will represent a day of “lasts.” Last game in Memorial Stadium. Last time to take the field to Metallica’s “Enter Sandman.” Last opportunity to play in front of a hometown crowd, before going down as arguably the most accomplished senior class in the program’s history.

Since arriving in Lawrence four years ago — in some cases, five — members of the group have helped lift the program to sights unseen. An Orange Bowl title. Back-to-back bowl victories. Twenty wins in two seasons. What’s more, they’ve helped to change the culture of a program. They made Saturdays at Memorial Stadium a happening, and, perhaps most astonishingly, caused people to divert their attention — at least temporarily — from the men’s basketball program.

And this was due in no small part to the four captains, all of whom have etched out the kind of legacies that figure to last long past their tenures in Lawrence.

Sharp, from Salina, played through pain every season and, if coaches and teammates have anything to say about it, will go down as one of the toughest players to wear a Kansas uniform.

Stuckey, always wearing a smile, is the team’s unofficial players spokesperson. As Kansas coach Mark Mangino once put it, “When he’s about 35, 40, he’s gonna smoke somebody in a governor’s race.”

And then there’s Reesing.

You know his story. How could you not? Overlooked in high school, he earned the starting job before the 2007 season and hasn’t really stopped tossing touchdown passes since. Three weeks from now, he likely will hold every significant school passing record.

Still, things have not gone as planned for Kansas’ seniors this season. The Jayhawks are mired in a four-game losing streak. They’ve gone silent on offense and haven’t won a game since Oct. 10, when they beat Iowa State, 41-36. Preseason hopes of a Big 12 North title ended with last week’s 17-10 loss to rival Kansas State.

It hasn’t been easy.

“We had so much success here,” Stuckey said. “We literally broke almost every KU record in the era of our senior class. But we can’t sit here and think that this is a fairy tale and this is a fantasy. If it was, we would have won all four of those last four games, and we’d be headed for 30 wins in three seasons. Instead, we’re on the other end.”

Maybe one day down the road — someday soon, possibly — they’ll look back on what could have been if a last-second pass had been completed against Colorado or a turnover or two had been avoided against Oklahoma or Kansas State.

But for now, there are still things to strive for, more milestones to reach. If they can qualify for a third-straight bowl, for instance, it will be the first time the team ever has done so.

“Right now, (there’s) a lot of different thoughts,” Meier said. “But the ultimate thought right now is just coming out and getting a win and leaving this place on a good note. What’s happened these past four weeks has happened. It’s in the past. We’re ready to move forward.”

Who knows what the next three weeks will hold? Based on the events of the past month — a sputtering offense, bizarre turnovers, slumping stars — it’s tough to say.

But with just three more games, guaranteed, to cement their legacy — to end their careers on a high note, the way they feel their careers should be concluded — they’re looking to make the most of the limited time they have left together.

“Too hard not to enjoy it.”

Play loose today men. You have made us proud!

Good job seniors. I apologize in advance for what's about to happen. 27-10 Huskers. Suh-nami happens. Come get some.

Does it occur to anyone else that this losing streak started shortly after the brawls with the basketball team? My theory is that the football players are mad at Mangino over the way he handled the incident and they are deliberately losing the games.

jayhawkintexas: It is now confirmed and entered into the official records -- when you move south of the Red River no rational thinking happens.

THANK YOU SENIORS!!! You guys have given so much to this school and program.

We appreciate it so much. Play loose and have fun. You guys will always be remembered for the new heights and stature you have taken KU football.

Win 2 of the next 3 and get a bowl win and you're sitting at 8-5. As poor as our line play is, that's darn near a miracle season. Everybody was blinded by all the skill players we have--and they are good. But they can't show their skill if they can't avoid a rush or find a hole on offense; or the defensive line can't put any pressure on the opposing QB.

Hey, Purdue beat OSU. ISU beat NU. Boise beat OU a couple of years back. That's why they play the game, Meathead. Your arrogant fans thought we were going to roll over the last two times you came to Lawrence. I just hope our team comes to play again today. If they do, it should be interesting.

THANK YOU SENIORS!!!!! I have so much enjoyed watching you play! Play with pride today and have fun! A win today could erase so much.... I'm proud to be a Jayhawk - wouldn't ever choose to be anything else - Rock Chalk!!!!!!!!!

Thank you seniors. Let's make a lasting last impression today! Give it everything you've got and we will come away victorious.

jayhawk in texas: of course I suspect you are on to something.

I posted about this a few times that something large seems unresolved from those incidents. It seems as if the wind was taken out of their sails and they missed the chance to have an 'air out' session. Get it off their chests. Hence we've lost a step ... if you are on target then it will be a long day today, next week and longer still at arrowhead.

hope you and I are wrong and it is co/incidence ..

With all due respect to those who believe that the players decided to punish their coach because he handled a rather insignificant matter in a manner that they thought was not the best is degrading to the emotional integrity of our players: Athletes take pride in their abilities, work their butts off during two-a-day practices in the summer heat, depend on all their teammates performing well to make it work, have plenty of shoving matches during practices which the coach deals with at every practice and want to have a good season and go to a bowl more than the fans want it. Isn't it more likely that the level of competition on the road and at home has been the biggest factor, along with questionable coaching decisions, and just some untimely player mistakes? JayhawkinTexas: I apologize for my red-river rivalry comment. I had not yet had my coffee yet. I really do like Texans.

Seniors, thank you for all the amazing memories. If we do not win another game this season, you have still given us so much....the Orange Bowl, the incredible win over MU at Arrowhead in the snow, making KU football fun again. All your sweat and blood, all the aches and pains, the hard work and self-sacrifice --everything you have given for this program--is greatly appreciated.

But do you know what time it is now? Much like Samson of old, it is time to shake yourself and rise up from the throes of defeat and despair and with renewed strength, crush the Philistines...er, the Huskers. :-) Go Hawks!

I just hope that the confidence that the Hawks display today far supersedes that which some fans are expressing. I believe the Jayhawks can win the last 3. It starts today. GO K U !!!

You can tell Meatsauce finally got internet up in the sticks of Nebraska, because he has nothing better to do than write meaningless comments on this board. Oh and meatsauce, nice recruit/player in Thunder Collins, who just got life in prison!! Quality fellow!
RCJHGKU!!!!

You seniors have been great. You have brought KU football so far. Win or lose today, we should all be very proud. Nothing but a class act. I will be in Arrowhead to see you for one more time. Rock Chalk!

Greatest group of seniors in the history of KU football! Let's get a win today fellas...ISU beat them at Nebraska for God's sake...Theyre not invisible and theyre not that great...My guess is Lee will start the game and Green will come off the bench and play some...Lee is much like Chase Daniels only not as talented. He cant throw on the run. And Green makes a ton of bad decisions throwing the ball...KU could win this game as long as they take care of the ball! Win the turnover battle and you should win the game.

we weren't suggesting 'throwing the games' rather lost some support hence a little confidence.

I don't really believe that the guys are throwing the games. It is ironic that the losing streak started at about the same time as the football/basketball incidents and I really, really believe that it is just irony. I wish the seniors the very best for the future and thank you for all the great games and thrills you have given us.

Thanks seniors! Now go out and kick some Husker ass today. Jayhawkintexas I live in Dallas(so I'm not bashing you for living in Texas) but that had to be one of the stupidist posts I have read this season.

Keep in mind meatsauce also predicted Nebraska wins the last two times they came to Lawrence. What username were you using in 07 and 05? I'd like to look up your predictions.

You guys have made us all very proud.

And if you do, use it to light your fire.

These guys are athletes and competitors and anyone who would suggest that they would lay down on the field of competition to prove some silly point doesn't know the heart of either.

anyone know of a live stream of the game today?...tired of shelling out for gameday every week because of abc's regional coverage

I have a good feeling about today! Our Seniors aren't gonna go down with a loss in their last home game. Lets Kick some ASS today baby! Rock Chalk

I was also wondering if there was a live stream or not...