Kansas guard Sherron Collins flashes a big smile down the bench after a three-pointer by guard Conner Teahan during the second half, Friday, Nov. 13, 2009 at Allen Fieldhouse. 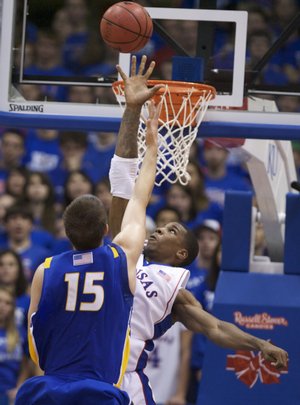 “Unless something unforeseen happens. I guess we can always pull them out,” Self said of removing the red shirt if players in the current rotation are injured.

He said both juco transfer Little and true sophomore Releford should benefit from practicing and not playing in games.

“Juco guys rarely graduate in two years because all the hours don’t transfer,” Self said. “Mario still has an outside chance to do that still (this year), but the extra year will guarantee him graduating. I think that’s pretty significant, pretty important.

“I also feel that with him not playing (much) last year and everything (because of injury), he could do some things to improve his perimeter play if he sits. He gives us an experienced guy next year, depending on who we lose (to NBA).

“With Travis … I think he will be a starter here. It’ll be very difficult for him to get a lot of minutes this year. So substituting age 23 for age 19 I think is pretty much a no-brainer for him,” Self added.

Little said though it was “hard to watch” from the sidelines Friday, he’s pleased with his decision to red-shirt.

“Myself, my family, a lot of people close to me thought I should red-shirt,” he said. “It was a tough decision. I did it. Hopefully in the long run it’ll pay off.

“I didn’t red-shirt because of Harrison Barnes (not choosing KU) or Xavier (Henry, perhaps turning pro after one year). I red-shirted because I felt I needed to work more on my game because last year I didn’t get to work at the guard spot.”

Sherron Collins, who was outscored by Henry 27 points to 23, grinned when asked if he gave the freshman grief for finishing with more points. Collins led the team in scoring in 27 of 35 games a year ago.

“Nah, I didn’t get on him for that. I try to get the ball to him and encourage him to shoot, score. It’ll help us win,” Collins said. “I’m proud of him. He works hard at practice, doesn’t pout or anything like that.”

KU hit 50.8 percent of its shots, including 11 of 27 threes against Hofstra’s zone defense.

“It was a weird zone, kind of a matchup. We got the ball where we wanted to the second half,” Self said.

“I think Xavier was feeling it (five of eight threes), and even though Sherron only shot 4-of-10, he was 1-of-5 in the first and 3-of-5 in the second. He was feeling it a little bit, and they didn’t really guard us. If they don’t guard, sometimes it turns into a H-O-R-S-E contest, and they were hoping we’d miss. Fortunately we knocked them down.”

“We’ve got a long way to go. We had some freshmen not play nearly as well as they did in the exhibition games,” Self said. “We certainly expect that, but there were some guys that did some good things out there.”

Hofstra received a guarantee of $75,000 for playing KU. … Tyrel Reed and Conner Teahan, who are not necessarily known for their shot-blocking, had two crowd-pleasing rejections. Robinson had a vicious block off the backboard, but was called for goal-tending. … KU won its eighth straight season opener and has won 18 of its last 19 openers. … KU stretched the nation’s longest homecourt win streak to 42 games.

I thought KU showed poor defensive poise many a times. They seemed lazy defensively and looked more like a Roy-coached team than a Self-coached one. Of course, this is only the first game but I think they might not be as defensively sound as the 07-08 team.

I wonder how much longer K will stay at Duke. With losing out on Barnes I'm thinking he will be making the hop to the NBA fairly shortly and the demise of the Duke program will shortly follow.

kupark - the 07-08 team gave up 78 to Louisiana-Monroe, and scored 107 in their first game, so it's still early season with a lot of exciting basketball to see before we get to no.40.

kupark - I don't really know how you can evaluate team defense in a blowout game like this. No team is going to be as defensively sound in their first game as our 08 team was in April of 08....

Having said that...I would like to see a defensive stopper emerge...somebody you can stick on the other teams best guy. I think it's one of the elements you must have to win it all.

-KU scored 13 fastbreak points and held Hofstra to only four.

Most of the first half the defense was lazy. In the last 3 mins or so they turned it up and got numerous turnovers which they scored on. The second half they did a much better job. It's a matter of the guy knowing they have to play hard and smart every second.

Chuckberry, Coach K just signed the #6 and #27th player in the country. Unless he wants to go to the NBA, I doubt he goes because he lost out on Barnes.

jayhawkcomet: I agree with you. I don't know what game these other guys were watching. Coach Self was glowing about Tyshawns defense. The only true negative was that they gave up too many offensive rebounds (17).

I saw a big article on how Coach K was losing the big name recruits and Harrison Barnes going to UNC would be another huge setback. They were looking to him to even the score and failed miserably.