Kansas guard Conner Teahan gets up for a pass over Pittsburg State guard Spencer Magana (2) but can't hang on during the first half Tuesday, Nov. 10, 2009 at Allen Fieldhouse. 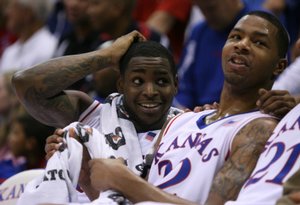 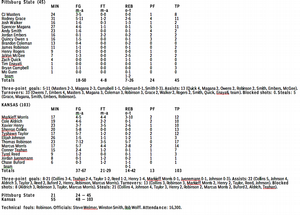 Who impressed you the most against Pittsburg State?

“It looks like Travis and Mario are both going to red-shirt,” Teahan said of Travis Releford and Mario Little, who did not play in the game. “Even if Travis doesn’t, it looks like the best decision for me. We’ll see what happens, maybe possibly red-shirt in the future.

He said he might be needed in games, “if we need a 3 (small forward) or if ‘X’ (Xavier Henry) gets in foul trouble or if I play well (and make rotation).”

KU coach Bill Self said indeed it looked as if senior Little and sophomore Releford likely would red-shirt, but the decision has not been finalized.

“I think that’s probably the percentage play with both of them even though we’ll sleep on it a couple nights,” Self said. “I think the likelihood is Mario will red-shirt. Travis ... I think that is definitely the strongest possibility. Even if you announce a guy is red-shirting, if next week a guy sprains his ankle, you can bring him out of it.”

“I still have a long ways to go, getting better guarding the post, knowing our offense and defense and getting used to the program,” Robinson said. “I’m better than when I first got here. There’s still work to be done.”

He was called for a technical foul for hanging on the rim after a vicious dunk.

Self said Sherron Collins, who wore a wrap on his left knee, is “fine.” Collins scored 13 points with five assists and four steals in 20 minutes. ... Tyrel Reed, who sprained his right ankle last weekend at practice, had three points and two assists in nine minutes. ... Freshman C.J. Henry, who is day-to-day due to a swollen right knee, did not suit up.

Royce Woolridge will sign a national letter of intent with KU today on the first day of the weeklong signing period.

Woolridge, a 6-foot-3 combo guard from Sunnyslope High in Phoenix, orally committed to KU in May of 2008.

“It’s a big deal around here,” Kenny Mullins, coach of Woolridge’s Arizona Magic AAU team said of a noon CST signing ceremony at the high school to be attended by several of Woolridge’s family members, teammates, coaches and friends.

“You’ve got a big-name player in the Phoenix area signing with the No. 1 team in the nation. He’s excited. We’re all excited.”

Meanwhile, Harrison Barnes, a 6-foot-8 forward from Ames (Iowa) High, will announce for either KU, North Carolina, Duke, Oklahoma, UCLA or Iowa State in a 3 p.m. news conference Friday. The announcement will be aired at 3:10 p.m. on ESPNU.

Three other players who visited KU this semester likely will wait until the spring according to Rivals.com.

KU’s 58-point margin of victory was sixth largest in exhibition history and largest since a 120-51 victory over Emporia State in 2000. KU has won 35 straight exhibitions and is 8-0 versus Pitt State all-time.

well i think it is a good ideal to have both travis and mario take a back seat this year, i would take mario as a fifth year player over the first year barnes. lets not forget that when mario came here he was the number 1 juco in the land. thank you mr. little for putting the team first and your pride second. you never know what could happen u still have a chance at the league, look what j.r. giddens did he was a fifth year player and was still taken in rd.1 in the league so just work your azz off and keep the dream alive..

Mario is an under-sized power forward. Barnes is an absolute game-changer. I have seen Barnes play at several events and I am praying that he selects KU and not that creepy program in Durham, North Carolina.

I'd rather he went to Duke than Oklahoma where we'd have to play against him.

HB can come to the "Mecca" of college hoops and put a few rings on his finger or he can go cry and whine with Roy and Rat in NC. Welcome to NBA Success Training 101 Mr. Woolridge.

Ralster this is our team without completely knowing HCBS system. We are deep, aggressive, non-selfish, and hungry. I really like this team and what it is capable of becoming. When HCBS spoke of this team having more talent than the 2008 team, I was skeptical, now I am a believer! I have never seen anything like this before, a team this loaded. It is almost scary to think about what this team is capable of achieving.