Raiders mix it up on KU

KU quarterback Todd Reesing scrambles away from pressure in the first half of Saturday's game against Texas Tech in Lubbock, Texas.

Did you agree with the benching of Todd Reesing in the fourth quarter against Texas Tech?

Get all the latest KU football reports 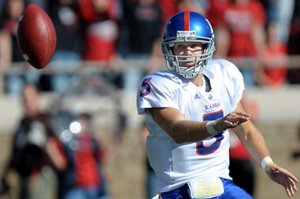 Pictures from the Jayhawks' game against the Red Raiders at Jones AT&T Stadium in Lubbock, Texas, on Saturday, Oct. 31, 2009.

Lubbock, Texas — The Texas Tech defense had one main objective Saturday when it came to Kansas University quarterback Todd Reesing: confuse him.

“We had a couple calls to focus on Dezmon Briscoe and (Kerry) Meier. They’re really great players,” TTU cornerback LaRon Moore said after his team’s 42-21 victory, “but I believe we just focused in on them and had a different kind of coverages where Reesing didn’t really know what we were doing. I believe that we mixed them up a lot.

“I believe we all did a great job, from the D-line to the linebackers to the secondary by confusing Reesing to where he couldn’t get it to No. 10 (Meier) the whole night.”

Meier finished with a season-low three catches for just 32 yards. The senior hadn’t had three catches or fewer since the Nebraska game last season.

Reesing looked a bit off the entire game as well, completing just 20 of 35 passes for 181 yards.

“We move one place and then switch back. It just messes them up.”

After allowing 52 points to Texas A&M last week, the Tech coaches focused on the basics in practice this week, from tackling drills to playing the with correct pad level.

TTU coach Mike Leach was pleased with his defense’s effort, especially against Reesing.

“He is accurate. He does make good decisions. He runs the unit great and has been a guy that is ridiculously competitive to the point where he’s succeeded where others didn’t think he was going to,” Leach said. “Playing against him and overcoming him, I think, is pretty big.”

The postgame news conference also gave Leach plenty of time to sound off on a wide array of topics.

For one, he explained more fully what he meant by his “fat little girlfriends” comments.

Leach said he learned the term from an offensive line coach he worked with at a football camp.

“And so, that’s kind of floated around our place for a while. It’s a figure of speech,” Leach said. “Too high a level of relaxation. Too much listening to the outside.

“And so to those who are offended, I’m offended that you don’t think that I get to exercise my first-amendment rights. So that makes two of us. That’s pretty much all I have to say about that.”

When asked about quarterback Taylor Potts, who entered the game for Tech in the second half, Leach started on a tangent about judging quarterback talent.

“People ask me the quarterback question all the time, and, ‘What does it take to make a good quarterback?’ I’ll tell you who doesn’t have the answer is most of the NFL scouts who select them,” Leach said, “because if they did, then all first-round draft picks would be remarkably successful.”

The coach didn’t stop there.

“ ... Or, ‘He’s really big.’ Well, have him play defensive end. ‘He can throw the ball really far. He just has to work on his accuracy.’ Well, I’ve got a whole bunch of defensive ends out there. They’d love to play quarterback. They’d really like to. And they can throw it a long ways.”

Leach ended his press conference by saying that choosing his quarterback for future weeks would be a gametime decision.

“I think it’s very suspenseful and fun for everybody. So we’re looking forward to it,” Leach said with a smile. “I’m on the edge of my seat waiting to see myself.”

"we knew if we moved, since they like to check and look to the sideline, we would throw them off" TT Linebacker coach. On several plays they put backers on the outside, we checked the sideline, to run it up the middle, while TR went to the line to change the line block, TT knew what we would check to and their backers met us at the line of scrimmage. Like candy from a baby, we are so predictable. TR as habit of walking to the line when it is checked from the sideline, during which time the backers return to the middle, watch the tape, we not only telegraph we let the D set up allow TT to call the plays.

We discussed this same issue last week on this site, while our offense is looking to sideline, the D gets a breath and changes the call during this extended time out. Hurry up, catch D off guard, don't allow them to change up. come to the line hike the ball and attack. The game belongs to the quick not the deliberate, quit dithering.

We have seniors at skill positions, let them play and make the calls. cancel the sideline check for a few series. If they double triple team Briscoe Meier that plays to our advantage, put them on same side and hit McDougal and WIlson flying down the other sideline.

It does seem like this team has played better the last few years when they just play their game faster instead of letting the play clock wind down every single play. That probably partially accounts for most of the slow starts as well.

Fully agree concerning the predictability. During Mangino's first year and after being trounced by Oklahoma in Lawrence, I was listening to Oklahoma sports coaches radio spot and Bob Stoops stated, "we knew every play they were going to run before the play started". Oklahoma had obviously figured out the K.U. hand signals. Now that Mangino has fixed that problem, Texas Tech has figured out that it has become a moving chess game and the defense is the only one that is able to move before the snap.

What happened to the days when the quarterback had the ability to audible just before the snap? Reesing and Peck our receivers and backs are smart kids, I think they develope an in-the-trench feel for how to out-smart the defense. The coaches have shown that they are being outsmarted. Give the quarterback and receivers and runner more authority to direct what they feel is going to work in a given situation.

I fully agree with the predictibility comments above. I was at the CU game in Boulder & in the 1st half, every time the Jayhawks offense looked to the sideline for the play, the Buffalo defenders looked as well. It was like they knew the hand signals & were reading the plays. In the 2nd half, KU must have changed the signals because Colorado stopped looking. I thought that was very odd & pretty obvious at the time. Looks like KU needs to change the way they're doing things offensively, because the word appears to be out around the league about how to scheme for our offense.