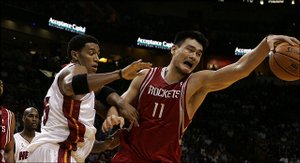 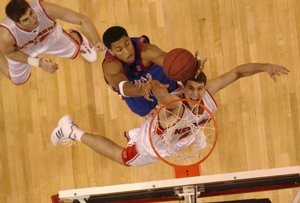 Wayne Simien fights for a rebound over Nebraska’s John Turek as Jake Muhleisen watches on in this 2005 file photo. Simien has returned to Lawrence to pursue a career in ministry.

Wayne Simien talks about his faith

Career at KU (2001-2005): All-America forward his junior and senior years and Big 12 Player of the Year his senior year.

Current job: President of Called to Greatness, a Lawrence-based sports program meant to develop young athletes in mind, body and spirit. Its Web site is www.iamctg.org.

It seems like a plot jumping off the pages of a perfectly epic summer beach read: A professional athlete, tremendously talented, leaves at the height of his career to return to the heartland of his birth intent on helping the next generation. He is a man walking with God away from the money, fame and glory of his past life — all with the hope of giving back.

In Wayne Simien’s life, there isn’t one.

What you see is what you get: A 26-year-old basketball player leaving the pros behind to start up a sports program that also nourishes the spirit. No best-selling hijinks or drama or motivation in sight. His only motivation, he says, is to do right by the Lord.

“There was a time when I was in college where I basically had everything the world says should make you happy,” says the former All-America Kansas University forward from Leavenworth. “You know, I was big man on campus, I had a measure of fame, I was headed to the NBA, I had access to all the drugs and alcohol you could ever want, all the girls, popularity and things like that, but I just wasn’t fulfilled deep down in my heart. I was really looking for something greater to live for than just myself and just basketball, and I found that in the kingdom of God and living for Jesus Christ.

“And my life has never been the same since.”

Simien hopes to affect that same sort of change in kids through Called to Greatness, his sports ministry organization. The organization, started last year, is in connection with Morning Star Church and Midwest Student Ministries, which spurred Simien’s transformation into a Christian. CTG, as it is called, begins its summer basketball league at 11 a.m. Monday at Holcom Sports Complex. Registration for the league is closed, but enrollment for CTG’s basketball camp, July 14, will begin June 15 at CTG’s Web site, www.iamctg.org.

“I think that for him, as he has seen, there’s just a lot of young people who fall through the cracks in Lawrence, even. Another year of playing would be a lot more money. But money is never really the problem, and I think he realizes that. It’s never really money, it’s people with a heart for other people that really make a difference,” says John McDermott, pastor at Morning Star Church. “I think this is just an entry into the life of service that God has for Wayne.”

CTG got its start last year when Simien was approached by another well-known former KU basketball player, Danny Manning, to take over as host of Lawrence’s summer basketball camp. Simien, a first-round draft pick with the Miami Heat out of KU in 2005, began working on the concept before heading to Europe for a season of professional ball in Spain.

“As I began to think and plan about hosting this event, I really just felt in my heart, ‘Wow, what a tremendous opportunity to glorify God through a basketball camp like this.’ So, you know, I saw it not only as opportunity to teach kids basketball skills with excellence, but also I want to develop them holistically as far as encouraging them to pursue education and nutrition and their spiritual life with the same zeal that they pursue being a good basketball player with. And then adding a ministry component to that as well because that is so much of who I am and wanting to impart that to them as well.’”

Simien envisions CTG will evolve into a national or international program that runs Christian-tinged sports camps, leagues and teams in much more than basketball.

“There are a number of connections and correlations that are related between sports and the Christian faith,” Simien says. “When Jesus talks about ‘man shall not live on bread alone but by every word that comes out of the mouth of God,’ it’s like, hey, well, you need to feed your spirit, too — read the Bible, pray, get with other believers, make sure your spirit is strengthened as well, just like your body, so you’ll be up to be victorious not just on the court, but in daily life.”

The philosophy of a holistic approach — body, mind and spirit working together to form a whole person — was something that Simien has been refining since his days on the hardwood at Allen Fieldhouse. Simien found Christ in 2003 after being ministered to by the student outreach arm of Morning Star Church, Midwest Student Ministries.

Early on in his transformation, Simien became reacquainted with Jesse Brinson. Brinson, now youth pastor with Midwest Student Ministries, also had been an athlete at KU — a walk-on football player — and they had met briefly on campus before becoming friends at Morning Star. Admittedly starstruck initially, Brinson watched as a baptized Simien shifted before his very eyes.

“Instantly, I could see that something had changed in his heart, that he was wanting to do something different with his life,” Brinson says. “The message I got from him was, ‘Yeah, I play basketball, but that’s not even half of me. Jesus Christ has given me something new that I can really pursue.’ I remember that, because that was really encouraging because really he has it all — he has a scholarship, he has basketball, he has fame. He has it all, but no, Jesus Christ has given him something more than even those material things have given him.”

The change affected Simien in everything he did. On campus, he ministered, he went to speak at youth groups and talked about his relationship with Christ during his Senior Day speech while being showered with roses on a court named after another Christian basketball man, James Naismith, who, in addition to being KU’s first basketball coach was also the school’s chaplain.

Simien’s Christian faith stayed with him during his first year in the NBA. Drafted by the Miami Heat, he showed up in the locker room and the culture shock was difficult. He says that his new teammates, who with his help won the NBA Championship that season, were hard-pressed to believe his faith would not waiver. As his teammates placed bets on when he would betray his faith, Simien was able to keep growing as a Christian with the help of friends back home.

“When I first got drafted, I was single at the time and being single and living in Miami ... isn’t the best place to be by yourself,” Simien says. “And so I had several friends from here come down and stay with me for weeks at a time to encourage me and keep me accountable and just to be a friend. I had people come and visit me all over the country.”

And though he was living a lifelong dream — to play professional basketball — Simien says he was constantly looking forward to a time when he could devote himself to the Lord full-time. Then, in spring 2009, against the urgings of friends who told him to just play a few more years and be set for life, Simien gave up on professional basketball all together. Despite being healthy and barely into his professional career, he decided the time was right to take his wife and two daughters back home to Kansas and start working for God.

By the beginning of May, at age 26, he had retired from basketball. But his job, he says, is just beginning.

“It had always been a desire in my heart to minister, and it was something that I was able to do while I was a professional athlete,” he says. “But this year, recently, really had the desire to do that more on a full-time level. This will be my full-time occupation.”