Kansas University’s Danielle McCray (42) heads to the basket during a trial for the USA Women’s World University Games Team. 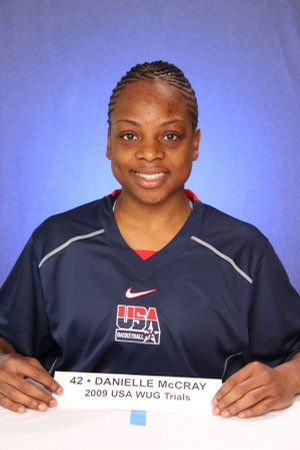 The finalists were selected by the USA Basketball Women’s Junior National Team Committee, chaired by Sue Donohoe, the NCAA vice president for Div. I women’s basketball.

McCray, an All-American candidate and 2009 first-team All-Big 12 member, was one of 30 players invited to the trials and the first player with KU ties to be invited since 2005, when Jayhawk guard Shaquina Mosley attended.

“This was an amazing experience,” said McCray, an Olathe native. “Getting an opportunity to compete with and against some of the top players in the country was a huge challenge. I am thrilled to be named a finalist, but I realize that my work has only just begun.”

“The competition level was very high,” Donohoe said, noting 14 players would be competing for 12 positions on the World University Games Team. The finalists will return to Colorado Springs on June 18 for training camp at the U.S. Olympic Training Center and train through June 25, when the team is expected to depart for the 2009 World University Games July 1-11 in Belgrade, Serbia. The 12-member roster will be announced prior to the team’s departure.

After assisting the USA women to a gold medal at the 2007 FIBA U21 World Championship, Arizona State’s Charli Turner Thorne returns to the USA sideline as head coach of the 2009 USA Basketball Women’s World University Games Team. Suzy Merchant of Michigan State University and Julie Rousseau of Pepperdine University will serve as assistant coaches.

“We’ve got a lot of fire power, a lot of offensive weapons especially inside with tremendous post play and wing play with (Maya) Moore and McCray,” Turner Thorne said.

Keep it going, Danielle. You can do it!

Well deserved selection to the final fourteen. The additional training camp time will be a great experience, hopefully followed by competing with the team in Serbia. You've made us (Jayhawk fans) proud again.

Congrats & wtg Danielle. It's great to see all your hard work & determination paying off. It's also great to see a local player (I'm in KC) representing KU so well. Good luck with the rest of the trials & also for next season. Let's go Hawks!