Kansas' Buck Afenir (30) chest-bumps Tony Thompson after a Thompson homerun during the game against Kansas State on Sunday, May 17, 2009, at Hoglund Ballpark.

The 2009 regular season came to a close on Sunday night for the Kansas baseball team. However, KU can still take a giant step forward into next week's Big 12 Tournament. 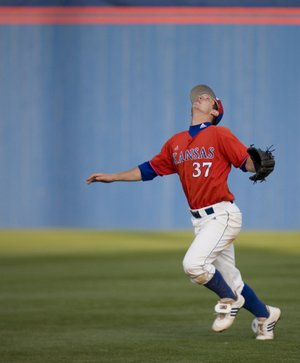 As far as productive days go, there are not many that can rival the one Kansas University senior outfielder Nick Faunce had Sunday.

He awoke early, headed out to a graduation party or two, picked up a couple of diplomas (one for chemistry, the other for biochemistry) during KU’s commencement ceremonies, headed to Hoglund Ballpark for the final home game of his career, recorded a career-high five hits and scored the game-ending run in the Jayhawks’ dominant 17-7 mercy-rule victory over No. 11 Kansas State in the teams’ regular-season finale.

But even after all that — even after packing a week’s worth of events into a single day — there was still one more to check off his to-do list: a late-night stroll down Campanile hill.

“You gotta go through the Campanile,” said Faunce, who was forced to skip the longtime KU graduation tradition Sunday afternoon in order to be on time for pregame warm-ups. “You don’t want to be cursed for life, so I figure that’s in order (tonight).”

For Faunce, who arrived at Kansas in 2005 as a walk-on before developing into a starter and team captain as a senior, Sunday’s game could not have gone much better. The past few weeks, hampered by a finger injury suffered while attempting a bunt, he has been largely out of commission, watching from the dugout as his teammates advanced through the Big 12 schedule with significant success.

So when he saw his name in the starting lineup Sunday for only the third time in the team’s past 21 games, he figured he’d better make the most of the opportunity.

And along with fellow senior Buck Afenir, he did, going 5-for-5 with three RBIs and three runs to lead a Jayhawks’ offensive charge that amassed its highest run total of the season and helped close out what, to this point, has been the most successful season in coach Ritch Price’s tenure.

Said Afenir of his longtime teammate, “It was Senior Day, the guy’s been here for 10 years or whatever — it was just a great end to a great career.”

Picking up where they left off in Saturday’s series-tying 9-3 victory, the Jayhawks knocked Wildcats starter Todd Vogel — who entered with a 4-0 record — from the game after just 2 1/3 innings and didn’t treat his four successors much better, pounding out 17 hits and playing a nearly flawless defensive game to secure the No. 5 seed in next week’s Big 12 tournament.

A seven-run third inning staked KU to a quick 9-2 lead, and the offense didn’t let up, putting up three runs in the fourth (including Tony Thompson’s two-run home run, tying the school single-season home run record of 18), two in the sixth and three more in the seventh, when the team’s first five batters reached base.

“I’m just pleased that my team fought back after Friday night and won this series,” said Price, referring to his team’s 4-1 loss to the Wildcats on Friday night in Manhattan. “The next step in this team’s development is to get beat on Friday night and then figure out a way to win on Saturday and Sunday, and we’ve done it against Nebraska, and we did it tonight.”

After last year’s season-ending series with the Wildcats, during which K-State swept the Jayhawks to prevent them from making the conference tournament for the second straight season, Sunday’s outcome might have been a touch sweeter.

For the first time all season, Kansas prompted the implementation of the rarely used 10-run mercy rule, forcing officials to end a game prematurely if a team leads by 10 runs in the seventh inning or later on a travel day.

“I liked it,” offered Afenir, who was 2-for-3 with a home run and three RBIs. “Just a little friendly payback, I guess.”

The victory placed a prominent exclamation point upon a season that has gone far better than anyone outside the Jayhawks’ dugout could have imagined back in February. In addition to earning their highest finish ever in the Big 12 conference, Kansas’ 15 conference victories mark the most in school history, and the team’s home winning percentage marks the best ever, as well. The Jayhawks finished 25-3 at Hoglund Ballpark.

However, with at least another week of baseball left to play — players, certainly, are hoping it’s a bit more than that — Price and Co. aren’t ready to rest on their laurels quite yet.

Kansas will open the Big 12 tournament Wednesday against No. 4 seed Kansas State in a 9 a.m. game at Oklahoma City’s AT&T Bricktown Ballpark. Following their recently completed three-game weekend series, it will mark the fourth time the teams have met in the past week.

And while Kansas likely has wrapped up a spot in the NCAA Tournament with a 37-19 overall record (15-12 in the Big 12), a strong showing at the conference championships would solidify their spot in a regional.

“When you’re playing well, you enjoy going to the ballpark every day, and you see your players getting better, and obviously we’re really proud of what they’ve accomplished during the course of the season,” Price said. “And I’m going to try to grind this thing out to the finish line.”

Congrats guys, looked good on tv! Does anyone know if Wednesdays game will be on tv? ESPNU by chance?

Just got home from the game. Fun times!

How about that double play Price made. Spearing the ball going up the middle then scooping it to second for the force with enough time to toss it to first. Man that was a "Pro" style DP>>>>>>>>>>.

great way to close the season.....i wanted two out of three, and they got it against the kitty cats.

it's too bad they have to turn right around and play 'em again on Wednesday....tis life in the Big 12 though. Morris will pitch for them for sure...hopefully we learned a bit from last friday.

Tough season for BB. The Big XII is so balanced. THe Hawks finished 5th and lost 8 of their 14 loses to lower finishing teams. Including losing 5 of 12 against the bottom 4 teams!

Great season and keep it rolling Coach PRice and the KU BB team.

Both of the middle infielders made major league caliber plays. And the outfielders were aggressive and kept runners from scoring from third a couple of times at least. And KU is under the radar a bit. Not ranked, although going 11-8 against teams that are currently ranked including the sweep of Texas, 2 of 3 against K-State and OU, and the 2 of 3 from Arizona State. They have chance to make some noise in post season play and end up it the Finals in Omaha. They could be very good in a couple of years once the younger guys get some experience and can deal with the pressures of winning. I watched the game and a few of KU's hitters look like major leaguers at the plate. Could be exciting with the recent success in football, a preliminary preseason pick for National Champs and this baseball team maybe winning a national title. Football could win the Big 12 Championship and end up in a BCS and possibly National Title game. Its not going to be easy, but they have the stuff to beat OU and Texas. Stuckey will be a leader on defense simply by how he plays the game. It won't show up in the statistics that he ran down Chase DAniel, force the fumble and then recover it, and that 2nd interception is something you see in the NFL. Not very often at the college level. If the new running backs have an impact, this could be a very special year.